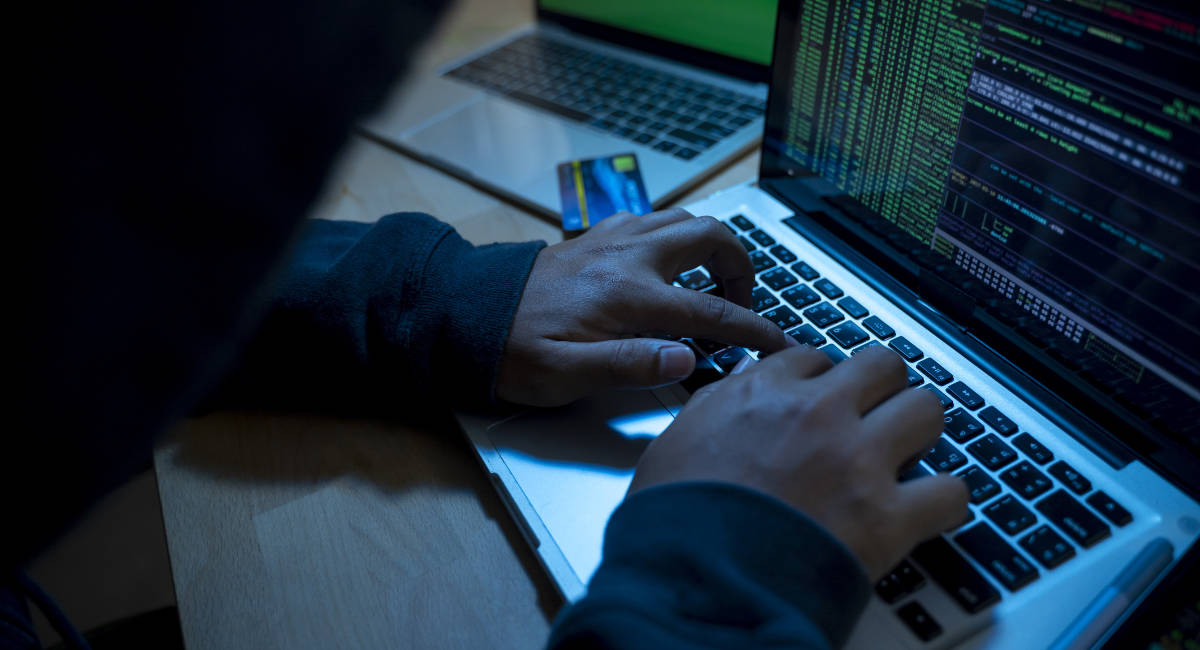 Even as the pro-abortion domestic terror group Jane’s Revenge continues to issue communiques, with the latest claiming credit for attacking a Washington pregnancy center with a “flaming cocktail,” pro-life websites are now also being targeted by pro-abortion zealots in the aftermath of the Supreme Court’s decision to overturn Roe v. Wade.

A tweet uploaded by the handle @NewAnonOps reads, “#OpJane we will activate dormant cells any site and organization that attacks or denounces the freedoms of women to the right to freedom of decision will be made obsolete and will be taken offline! expect us, we are Anonymous!”

A separate handle @LorianSynaro tweeted, “Anti-choice organizations will be attacked daily to ensure they have no safe space on the internet. We want revenge on behalf the millions of women whose life will be impacted by the decision of the supreme court. We want revenge. We want #JanesRevenge! #OpJane reengaged.” 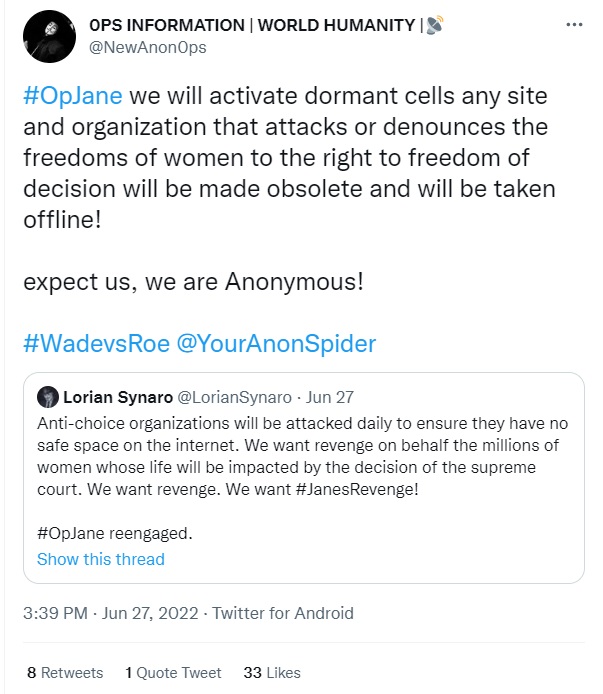 On June 26, Shawn Carney tweeted, “The insane violent abortion advocates Jane’s Revenge did a cyber-attack on @40daysforlife to try and stop our post-Roe webcast tomorrow night. The website is back up, send a message and register now[.]”

The insane violent abortion advocates Jane’s Revenge did a cyber attack on ⁦@40daysforlife⁩ to try and stop our post-Roe webcast tomorrow night. The website is back up, send a message and register now:
⁦@MattWalshBlog⁩ ⁦@LifeNews⁩ https://t.co/NTNcTXsPmd

The Twitter handle @LorianSynaro, seen in the above tweet, has tweeted several announcements of alleged attacks involving multiple pro-life groups. “Abolish Human Abortion Organization database has been messed up. You can try by clicking any link on their main page. This is Jane’s revenge,” the profile tweeted on June 28.

Then, on June 29, the profile tweeted about another alleged cyber-attack. “The National Right to Life organization website is offline since 48+ hours! This is Jane’s revenge. We will not stop. To all the anti-choice organizations: Be ready to suffer the consequences of your actions. #Anonymous#OpJane#JanesRevenge#RoeVsWade”

That same day (June 29) the profile tweeted that a third cyber-attack had allegedly occurred: “The Florida Family Association is also an anti-choice organization and is thereby responsible for the proliferation of ultra-conservatives ideologies. The FFA has also been hacked in retaliation to its reactionary agenda and desire to control women bodies. #Anonymous#OpJane”

Live Action News reached out to National Right to Life but as of the writing of this article has not received a response. While it does appears that there are errors on the Abolish Human Abortion website, Live Action News has not independently verified the alleged cyber-attacks on 40 Days for Life or Florida Family Association. 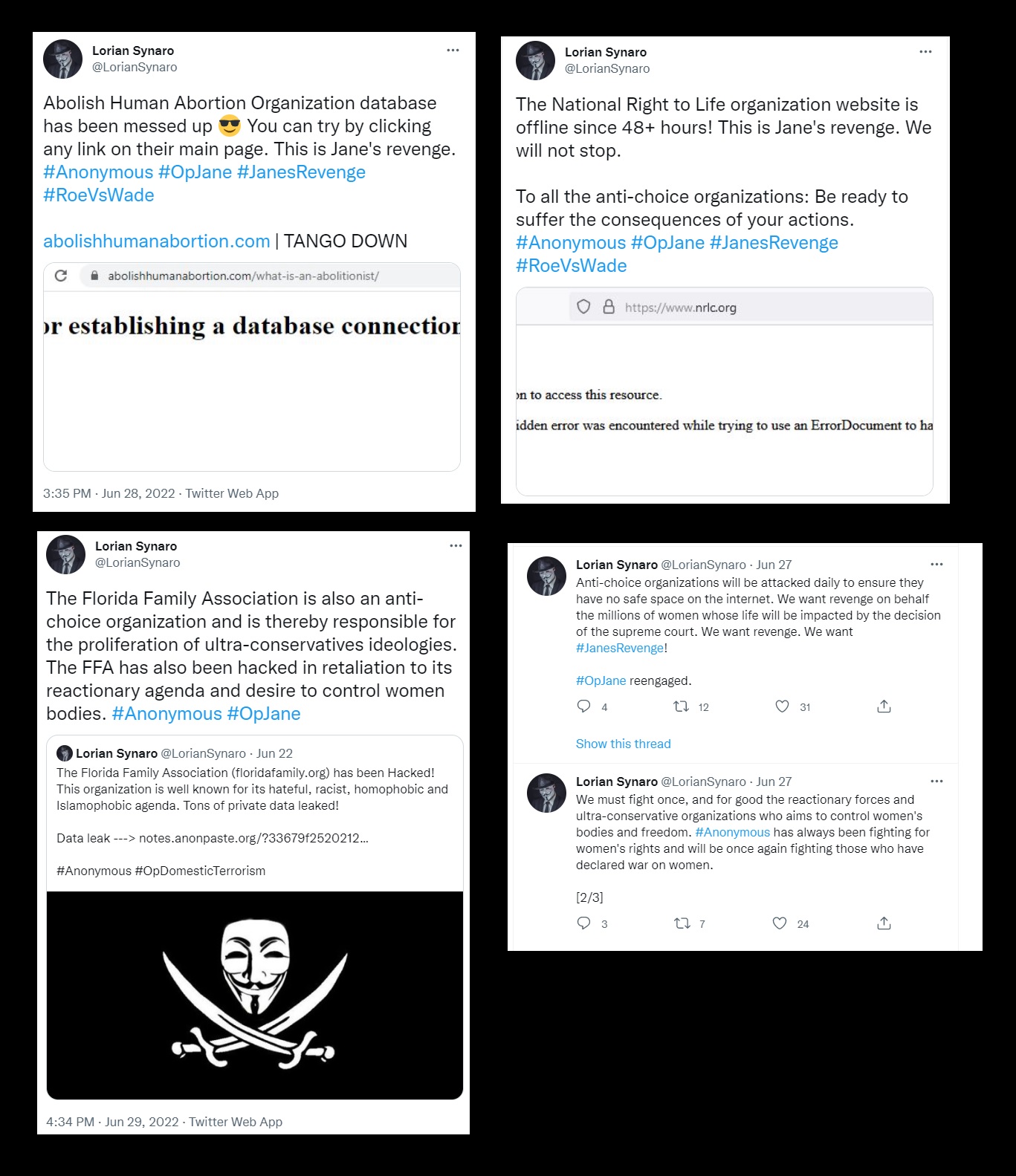 In addition, the Twitter handle @PogoWasRight tweeted, “Unsurprisingly, we are seeing some cyberattacks against those who support abortion bans. One group has already targeted/hacked two state govs and dumped files. Partial screencap (redacted).” 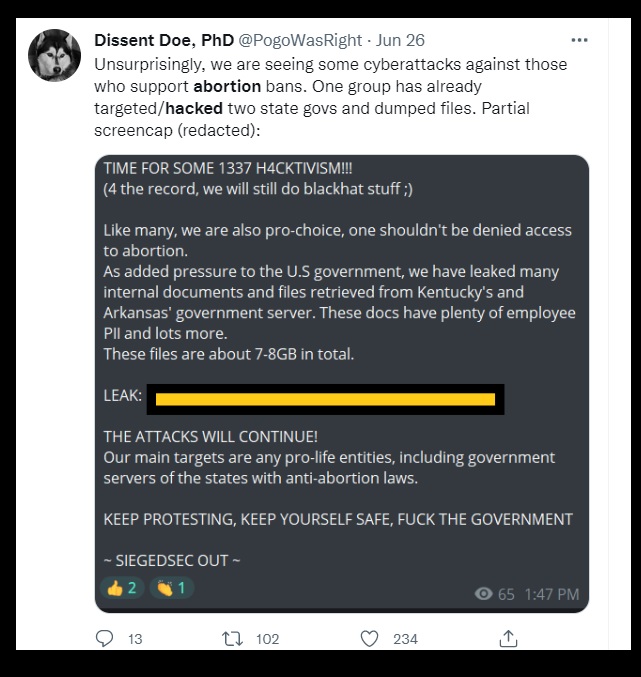 “On the night of June 27 a local Jane’s Revenge cell visited our neighborhood PRC (patriarchal rapist collaborators/pregnancy resource center) in Everett WA and had a smashing time with their windowglass and a flaming cocktail,” a memo allegedly sent to the Abolition Media blog by email stated.

“We echo what you have heard from JR before – in acting, we learn to act, and in waiting, we learn only to wait. Acting is fun and easy. You only need a few very trusted comrades. Those who would kill us are vulnerable and visible. We’ve only just begun,” the messaged added. It was signed, “In revolutionary joy, Jane’s Revenge.

No proof of the attack was provided, just an unrelated photo. 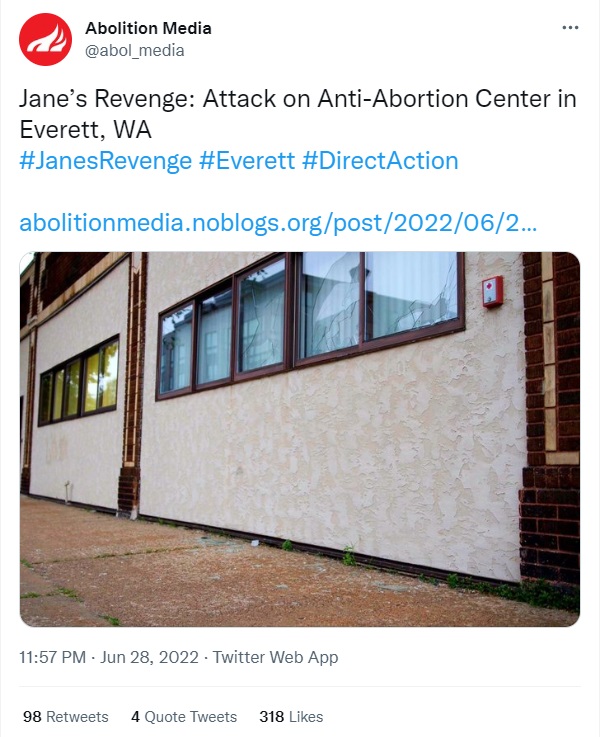 Live Action News contacted the Everett Police Department where a spokesperson confirmed an incident took place at the Two Hearts Pregnancy Aid center in Everett. The police spokesperson said the case has been turned over to the ATF and added that the pro-life center did not receive any fire-related damage. A spokesperson at the pregnancy center did confirm to Live Action News that a device was thrown through a window of the center, but she could not comment further.

A message published to the PRC’s website confirmed an incident on June 27: “Our building sustained some vandalism during the night on Monday. The authorities were called and the cause of the damage is under investigation. Two Hearts Pregnancy Aid is a non-political, non-sectarian social-service organization. We remain committed to providing material goods and support to expectant parents, babies, and children up to 5 years old,” it stated.

Abortion supporters took to the streets in a Night of Rage the weekend following the Court decision on June 24 in D.C. chanting the infamous Jane’s Revenge mantra, “If abortions aren’t safe, neither are you” and threatening to burn down the Supreme Court.

A post published June 30 to the Jane’s Revenge blog, “Fake Pregnancy Center Smashed,” claims responsibility for vandalism done to the Blue Ridge Pregnancy Center in Lynchburg, Virginia, on June 24. A previous communique about the incident was published at Abolition Media blog on June 27 and stated, “On June 24th, the night after the Supreme Court overturned Roe v. Wade, Jane’s Revenge smashed the windows of the Blue Ridge Pregnancy Center’s headquarters in so-called Lynchburg Virginia.” The center published images of the crime to their Instagram and Facebook pages showing that the vandals had broken windows and left a graffiti message typical of Jane’s Revenge which read, “If Abortion Aint Safe You Aint Safe!” It was signed Jane’s Revenge with an anarchist ‘A’ symbol. The pro-life organization’s sign was also tagged with the anarchist ‘A.’ 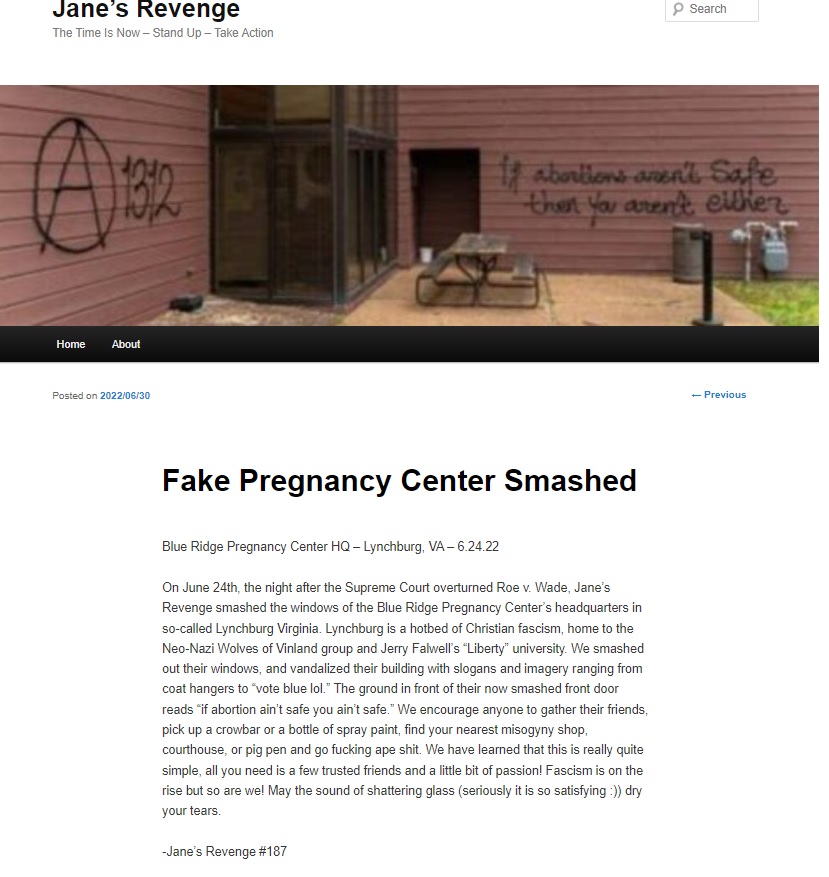 In New York, a Catholic Church near Amsterdam Avenue was graffitied June 27 with the Jane’s Revenge style threat, which read “If abortion isn’t safe, neither are you,” law enforcement told the NY Post. The GOP headquarters in North Carolina was spray painted with the Jane’s Revenge threat, “If abortion isn’t safe neither r you,” according to multiple social media posts on Twitter. And the Vermont State House was also vandalized with a spray painted message that read, “If abortions arent safe you arent either,” according to a News nation report. Live Action News will publish more on these incidents in a separate report.