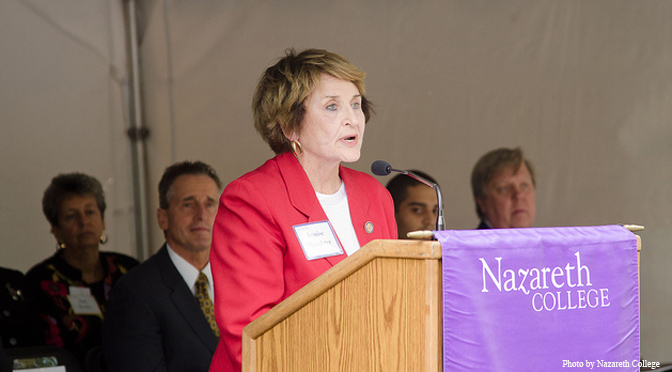 As Paul Ryan begins his new duties as Speaker of the House, he is already coming under fire from pro-abortion politicians for his support of the special committee created to investigate Planned Parenthood.

In a strange welcome letter to the new speaker, Rep. Louise Slaughter (D-NY, pictured above) urged Ryan to “immediately dismantle… the Select Investigative Panel on Planned Parenthood,” citing “wasted taxpayer money.” Interestingly, Slaughter seems to have no problem with the millions in taxpayer money wasted annually on Planned Parenthood. If we’re really talking about “waste” here, there are plenty of women’s health centers that could provide more and better services – without the legal problems.

In her letter, Rep. Slaughter calls out pro-life Republicans for investigating what she calls “pet political causes.” She’s right – at least partly so. This debate is about pet political causes – only instead of accusing others, she should look in the mirror. Slaughter is a consistent recipient of campaign donations from Planned Parenthood, including $9,999.00 during the 2012 election cycle. According to Slaughter’s congressional website, she strongly supports “the constitutional right to an abortion.”

As co-chair of the House Pro Choice Caucus, Congresswoman Slaughter is the leading voice in Congress protecting a woman’s right to choose and defending women’s reproductive freedoms from anti-abortion rights legislation.

Clearly, Slaughter has a pet political cause of her own.

While Paul Ryan is known for his controversial willingness to compromise, it is unlikely that he will cave to such groundless demands. The investigative committee on Planned Parenthood still has work to do, and hopefully Ryan will continue to push for results.