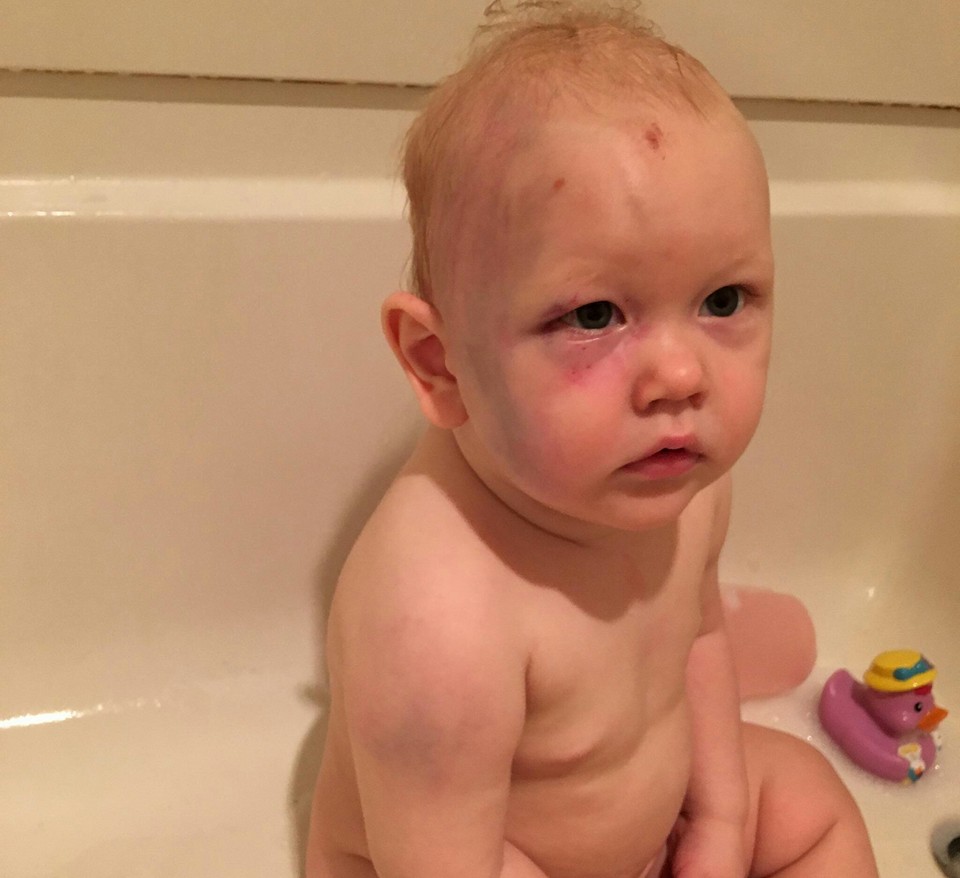 Sometimes when pro-abortion propagandists are desperate to find a new angle from which to attack pro-lifers as heartless phonies, they end up blaming us not only for problems we had nothing to do with, but for problems that can more closely be traced back to themselves.

At Raw Story, Sarah Burris tells the heartbreaking story of an Oregon couple who came home to find their one-year-old son Jacob (seen above, via the father’s Facebook page) had been beaten by a babysitter to the point where little Jacob could have been killed.

And yet, as grieved father Joshua Marbury explains:

After several days if not week of being distracted at my job (only commission sales job and only source of income) we had a confession from the abuser saying they did it. STILL this person was not arrested because they had to build a case and a jury to find him guilty BEFORE they go to jail. Side note if im not mistaken (if i strike a person in the face and the cops were called i would be put in hand cuffs immediately). After TWO months of waiting we only find out that charges are dropped BECAUSE my one year old cannot tell you verbally he was abused and my son did not show he was in pain OR that this person “intentionally” did this.

It turns out this farce of justice is due to a 2012 judicial ruling that determined in cases of felony assault or criminal mistreatment, “physical injury” can only be substantiated if the victim can articulate experiencing “substantial pain,” and that welts and bruises—which can be plainly seen in the horrible pictures of this poor baby—don’t prove “impairment of a physical condition.”

This is all horrible, and obviously needs to change, but how exactly are pro-lifers at fault here? According to Burris, its because “anti-choice activists fight for abortion laws — but not for abused babies like this”:

State legislatures have issued an onslaught of anti-choice and forced birth bills over the last several months. States like Oklahoma and South Carolina passed some of the most severe. Other states are passing insane bills under the guise of being anti-choice, like Kansas’s human-animal hybrids legislation. But when it comes to children who have faced abuse, one father is saying there is no justice thanks to an Oregon court ruling […] South Carolina’s latest anti-choice law alleges that abortions should be illegal because a fetus can feel the pain associated with the abortion.

Aside from the small detail of the father saying absolutely nothing about abortion in his note, one other minor discrepancy stands out here: all these examples of pro-life laws that are supposedly distracting legislators from tackling this cause are in states other than Oregon.

In fact, NARAL gives Oregon an A grade as the sixth most pro-abortion state in America, saying that the governor’s mansion and the state legislature—y’know, two-thirds of the government and the people in a position to do something about this—are all “pro-choice.” Americans United for Life declares Oregon to be the country’s fifth worst state for preborn babies.

Further, the judge who wrote the Oregon Court of Appeals ruling that created this wretched situation, Lynn Nakamoto, was promoted to the state Supreme Court afterward by pro-abortion Governor Kate Brown.

So despite the popularity of the infernal talking point that pro-lifers stop caring about children once they’re born, in truth it seems that pro-abortion states like Oregon aren’t safe for babies on either side of the womb.

If this sounds familiar to longtime readers, that’s because pro-aborts have tried to project their own failings onto us before. In 2012, we discussed a rapist demanding visitation rights to the child he fathered in the pro-abortion Mecca of Massachusetts after an activist judge nominated by a pro-abortion governor gave him a light sentence…yet a month later, a pro-abortion columnist accused pro-lifers (based on just as little evidence) of “sentencing” women to “a lifetime co-parenting the child with her rapist.”

I hope the state’s lawmakers do take swift action to find justice for little Jacob and his family, and protect other children from this insane legal blindspot…because heaven knows the people who champion the killing of Oregon’s youngest have utterly failed to protect those just a few months older.