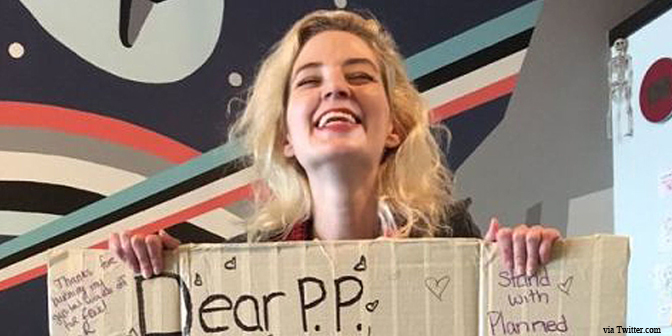 It’s no surprise that the pro-abortion magazine Slate would be supportive of pro-abortion people. But one of their recent pieces is raising eyebrows for calling a woman who drew pictures of genitalia and harassed children “brave”…

29-year-old Mary Numair made a sign to counteract the peaceful and prayerful pro-life presence outside and nearby a Portland Planned Parenthood. As Slate describes it:

The sign, which Numair crafted out of masking tape and a piece of cardboard from the dumpster, praised Planned Parenthood for treating her chronic yeast infections when she was in her early 20s and uninsured. It also included a delightful cartoon of a vagina with a smiling clitoris and a stick figure with pigtails and prominent breasts….

The piece mentions that Numair’s yeast infection is “deeply personal,” but that didn’t stop her from sharing it with Slate (and thus all of Slate’s readers) and with all who saw her sign. She even asked the child of a Planned Parenthood protester, “Do you know about yeast infections?”

It seems unsettling that Numair would approach a child in such a way. She is a supporter of Planned Parenthood, though, which seeks to ‘educate’ young children. I’m sorry, I mean indoctrinate them.

As a woman, I can tell you that we don’t need Planned Parenthood for yeast infections. Over the counter medications almost always work, but if they don’t, any physician (as well as some other medical professionals) can prescribe an anti-fungal medication. There are many other places to go, even if you don’t have insurance.

Numair and Slate certainly take a mocking tone towards those who exercise their First Amendment rights to protest the nation’s largest abortion provider. And yet, those who go for the shock and vulgarity factor, as Numair does, are being hailed and praised as “brave.”

To borrow a term used in the article, the closing is quite “delightful.”

Though her yeast-infection story is deeply personal, Numair thinks her strategy—chanting reproductive-health terms that embarrass anti-choice protestors—is replicable for other counter-protesters around the country. “I did look at the preacher-pastor guy and said, ‘See you next time!’ and I intend on sticking to that,” she said. She plans on making a bigger sign, too, and perhaps a few props. “If someone wants to help me make a giant wooden labia, that would be great.”

As offensive as it may be to display a “giant wooden labia,” just for the sake of shocking a “preacher-pastor guy,” good luck to Numair if she thinks she’s going to so easily discourage him and others committed to standing up for preborn children.