Left-wing propaganda is occasionally good for more than just hogging bandwidth. It can also be educational…at least, in a “don’t let this happen to you” sort of way. The ACLU-commissioned “Stealth Attack” comic that Kristi Burton Brown just demolished for Live Action offers a perfect example of how we can solve vital questions by reverse-engineering the wrong answers.

I’d like to focus on the below image, in which cartoonist Jen Sorensen is essentially diagramming the Progressive movement’s redefining of freedom: 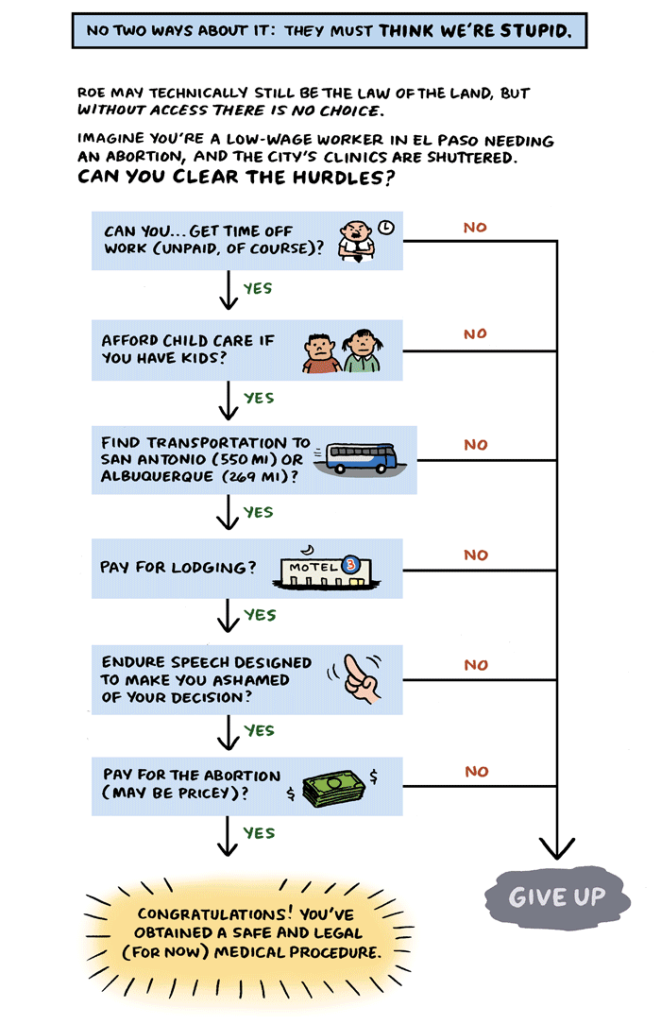 The American constitutional order operates on the understanding that freedom is the absence of artificial constraints on human action – nobody can lock you in your own house, shoot you for saying something unpopular, etc. It quite consciously does not entail entitling someone to a particular result – my freedom of movement doesn’t mean I get to break into someone else’s locked door, my freedom of speech doesn’t guarantee that anyone has to listen to me – because its limits are governed by the simple principle, “your rights end where mine begin.”

If exercising a certain freedom violates someone else’s freedom, then it’s not actually freedom.

Then Progressivism came along. Deciding that “formal freedom” was basically worthless if it didn’t give you satisfying outcomes, they set about replacing it with “effective freedom” – proactive government action to satisfy people materially. Hence, modern liberalism has to have a constraining, regulating hand in everything. Respect for new “rights” coming at other rights’ expense went out the window in favor of ever-shifting notions of the greater good.

That’s the basis of Sorensen’s “without access there is no choice” formulation. Liberals in general, and pro-aborts in particular, love to throw around the word “access” because it frames the stakes in such a deceptive way. Talk of “blocking access” makes people think of somebody actively erecting tangible constraints, like barricades around a building or laws prohibiting the sale of a certain product.

But notice that none of the “hurdles” Sorensen lists are actual barricades or legal penalties. They’re merely inconvenient (and often exaggerated) circumstances either that are nobody’s fault, or that the abortion-seeker’s own actions have put her in. If they’re “injustices” that society owes her relief from, then that means taking from and controlling more people to make it happen – taxpayer funding of abortion, mandatory abortion leave from work, public subsidies for transportation and hotels, you name it. If pro-aborts haven’t thought of demanding it yet, it’s only a matter of time.

To appreciate the flaw in this approach, just imagine if we tried to claim the same sort of “access” to another right – like, say, the right to bear arms, which, unlike abortion, the Constitution actually mentions.

Can I get taxpayers to help me afford the gun and ammo I think I need to protect my family? Can I sue if I think my state’s gun permit requirements are too burdensome, or seem “designed to make me ashamed of my decision”? Can I pass laws forcing private businesses and/or residences to let me carry on their property, if I feel they’re denying me “access” to my means of self-defense?

Good luck finding any pro-abort who would agree to any of that.

Also, good luck finding many gun advocates who would endorse it. Whereas talk of “reproductive rights” is typically empty cover for pro-aborts’ insatiable greed, conservatives generally respect the fact that even the rights we cherish have to be exercised within a framework that doesn’t trample on the rights of others.

Of course, pro-aborts would skip any such discussion of rights by indignantly pointing out that guns can kill people.

Unlike abortion, apparently. Reading solely Sorensen’s comic, you wouldn’t be able to say what abortion does at all. Maybe it transplants babies into knapsacks that are carried away by storks? Undoes conception via time travel? Anything but acknowledging that there’s someone in each of these “safe and legal medical procedures” for whom it’s not safe at all.

“They must think we’re stupid,” indeed.