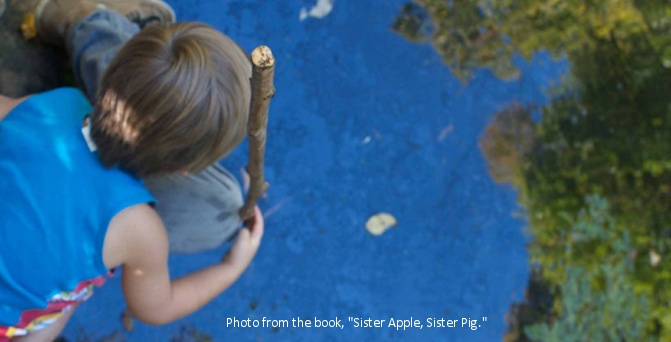 Many people who find out that they had a sibling who was aborted are not happy about it. And why should they be? An entire childhood was stolen from them, a brother or sister taken away. What kind of memories might they have had? A lifetime of playing together, of stupid fights and giggling and bonding, is gone. It’s understandable that people would have mixed emotions about it, at the very least.

Of course, the pro-abortion lobby doesn’t care about the reality of abortion, or the trail of devastation it leaves in its wake. And case in point is a new pro-abortion book, written for children, in which a little boy discovers that he has an older sister who was aborted, and rather than being devastated by it, gleefully proclaims that his sister is a “happy ghost”.

Right from the beginning, “Sister Apple, Sister Pig” lets you know that pesky things like grief or sadness over the thought of a missing sibling are not welcome, stating, “To Little Friends, earthly and unwordly. Masochists, look elsewhere; between these pages you will not find the ‘luxury of grief,’ culpability’s sharp sting or salty guilt.”

This book is unabashedly pro-abortion, and exists to promote it first and foremost — and perhaps the worst part is that it’s being promoted to children. Media Research Center reporter, Katie Yoder, detailed more of the horrifying story:

“Lee is Papa and Mama’s only child for now, although there once was a sister,” the book began. “Where does Sister live now?”

At one point, Lee explained to his Papa, “Well, she used to live in Mama and doesn’t anymore.” After Papa agreed, Lee reiterated, “She lived before me, but Mama couldn’t keep her. Mama says she is a ghost.”

When Lee’s Papa asked, “[D]oes that make you sad or scared?” Lee changed his tune. “I’m not sad that my sister is a ghost! If you kept my sister, you would be tired, and sad, and mad!” When his father questioned why, Lee continued:

Because we would be wild and loud and sometimes we would fight. Mama might be scared that she could not buy enough food for us. Mama might not have enough time to read to me, to paint with me, to play with me, to talk with me….

Papa also noted “good reasons” Lee doesn’t have a sister “right here right now.” “Maybe you will have another sister when there is more time, and there is more money,” Papa said.

But even during story time, Lee couldn’t forget about his lost sibling. He whispered the “secret” to his uncle: “The secret is that she’s… she’s a ghost!” Lee – and his Uncle – pretend she’s still there. “The ghost girl can sit beside me,” his uncle offered.

Later, Lee told his uncle, “Mama had an abortion before she had me,” but “reassures” him that “Sister is a happy ghost!”

The book purports to show that children wouldn’t care that they had a sibling who was aborted. It tries to make it seem as if the little boy does not have any grief or negative feelings towards losing his sister.

Yet somehow, Lee can’t let go of his “ghost sister.” He talks about her constantly, says she will be there when he needs her, and includes her in his interactions and games after he finds out about her. It doesn’t come across as a little boy who actually is happy about his sister being aborted, which is the story narrative. Instead, Lee clearly seems to want to have his sister around, imagining what she looks like and finding ways to include her in his games and activities.

Even when pro-abortion advocates try to pretend that abortion is a positive thing that does not affect people negatively, they still can’t quite erase the reality of the tragedy of abortion. The story of a little boy who plays with his ghost sister and claims she looks like him is not the pro-abortion tale that Blackburn seems to think it is.

Instead of turning abortion into a light-hearted experience that doesn’t devastate the people who are victim to it, the book reinforces the sickening nature that is inherent to abortion. Just referring to the sister as a “ghost”, the little girl’s humanity is inferred, and it is made clear that abortion has taken a life. After all, if the preborn baby wasn’t alive, and abortion was just clearing out a meaningless clump of cells, there wouldn’t be any ghost, would there?

And as if this book wasn’t sickening enough, the author read the book at an art exhibition held in an “anti-fertility garden”, complete with “a fetus-size casket covered in chocolate frosting beneath an abortion-commemorating date painting that lashes On Kawara.”

The depravity of the pro-abortion movement truly knows no bounds.