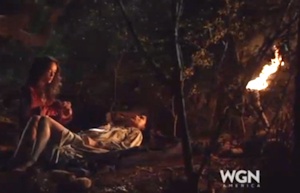 On Easter Sunday, WGN debuted its new series, Salem. The show is the network’s first original series, and the jury is out on whether it will maintain a viable audience. Overall, critics believe that the series may rely too much on overused sources of shock value to remain afloat in the cutthroat primetime market, and that was enough to secure its relatively large viewing audience for the premier. The show did indeed exploit all the popular sources of entertainment value on TV today: gratuitous sex, violence, demonic possession, supernatural phenomena, radical religion, and, of course, the social controversy of abortion.

The show is set in 17th-century Massachusetts, and the inhabitants of Salem are bound to laws dictated by Puritanism, prohibiting and severely punishing any act seen as sexually immoral. As a result of their skewed view of sex, Puritans immortalized offenses against sexual morality by forcing perpetrators to wear symbols of their crimes, and assigning blame even to their children, who would be viewed as illegitimate for as long as they lived.

In the opening scenes of Salem, we learn that a young couple has conceived a child out of wedlock. The father goes off to war, leaving behind the unwed mother, Mary. The show doesn’t depict the decision-making process of the mother, but ultimately she concludes that sacrificing the baby to Satan in exchange for great power is better than giving birth to an illegitimate child in Salem.

Her friend, who practices witchcraft, takes her to the forest and begins to perform the sacrificial ritual. The scene quickly becomes nightmarish as cockroaches and slime creep over the mother’s body, who had changed her mind about the abortion but is forced by her friend to proceed. The whole process seems to take place supernaturally, because after the slime and cockroaches disappear, the formerly-burgeoning belly is flat, indicating that the baby is gone, though you never see its body. Later, small skulls – said to be those of the “unborn” sacrificed to Satan – are found hanging from trees near the satanic rituals in the woods.

During the forced abortion process, the mother’s friend responds to her protests, hypnotically telling her that there is no place for the baby in Salem. She says that the forest will look after the baby’s soul, and her own. And she says that in exchange for the mother’s offering (to Satan), she will receive ultimate power. Notably, from that point on, Mary – up to then portrayed as meek and loving – is the show’s most wicked character. Her transformation is on the one hand expected, since Mary had consciously assented to sacrificing her child at some point prior to the act, but also tragic, because ultimately the deed was done against her will.

Salem is rife with creative license to butcher history and incorporate fictional supernatural events that don’t accurately reflect the real history of the “witch hunts” of the time, but the fantastical element unfortunately does not explain away the gruesome and tragic circumstances of the show’s abortion, which are more or less reflective of reality. Abortions are often forced or coerced; they are gruesome (sometimes deadly), and they leave mothers transformed for the worse.