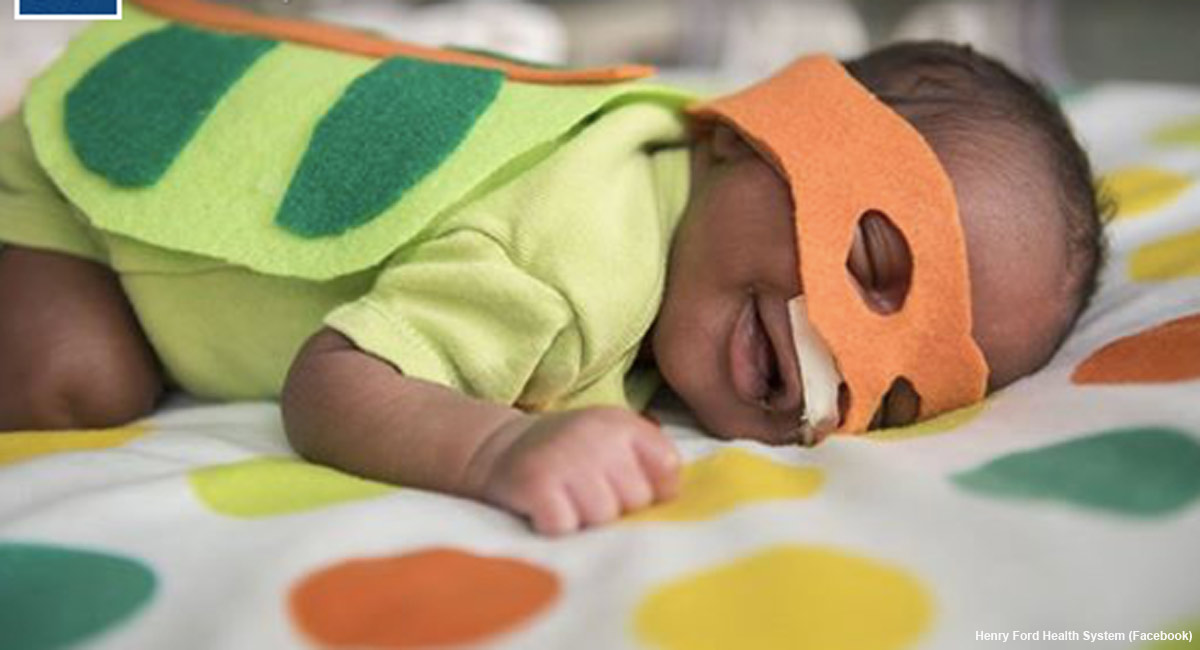 Parents who have given birth to premature babies are often battling stress, fear, and grief as they endure watching their children fight to stay alive. That time in the NICU can be trying enough as it is, with the fear that your baby won’t survive, and the sorrow of knowing that your first months together as a family are spent in a hospital instead of at home. But the heroic NICU workers across the country work hard to make sure that these families are able to make the best of the situation, including celebrating holidays. And today, hospital NICUs across the country helped their tiny preemies have a spooky good Halloween with adorably tiny costumes.

Woman’s Hospital in Baton Rouge, Louisiana, got in on the fun with cute pumpkins, caterpillars, and cheerleaders:

Advocate Children’s Hospital in Illinois, rated the best children’s hospital for neonatology for 2018-2019, had a fun Halloween costume contest:

MU Women and Children’s Hospital in Missouri wished families a Happy Halloween with sweet little Minnies and Mickeys, Captain America, and even a Starbucks coffee cup!

Henry Ford Health System in Detroit outfitted their NICU babies in homemade costumes sure to make anyone smile.

At Mercy Hospital in Oklahoma City, a video captured all of the Halloween fun:

These costumes have become a tradition for many hospitals, outfitting their little fighters in homemade outfits every year. Many nurses and volunteers make the costumes themselves, or partner with organizations like the March of Dimes. “Every day, a child in the NICU can be frightening and uncertain, but holidays are especially tough, as families miss the normal joys of celebrations at home,” Rebecca Keunen, March of Dimes and NICU family support coordinator for St. Luke’s Hospital in Kansas City, Missouri, said.

“The idea is to be able to allow parents to have a sense of normalcy,” Michelle Manual, St. Luke’s director of media relations, added. “In the NICU you might be there for weeks or months and this is to help spend that first Halloween and those special first moments together—make those special family memories with us.”

Preemies are increasingly able to survive at younger and younger ages, especially if they receive active treatment instead of just comfort care. These celebrations at hospitals across the country show that no matter how tiny a life may be, it’s still a life — and a life worth celebrating, at that.