Daily Wire writer Amanda Prestigiacomo recently took to Twitter to share the amazing story of her preborn niece and how she shocked doctors. During her sister’s pregnancy, doctors informed her that her preborn daughter had an “incredibly rare” complication. An amniotic band was wrapped around the baby’s leg, blocking blood flow and threatening the need for amputation. Doctors said there was nothing they could do and they advised abortion.

“My sister never once entertained the idea of abortion,” said Prestigiacomo on Twitter. “Mind you, this was an unplanned pregnancy; she was handling all of this alone from the day she found out she was pregnant.” 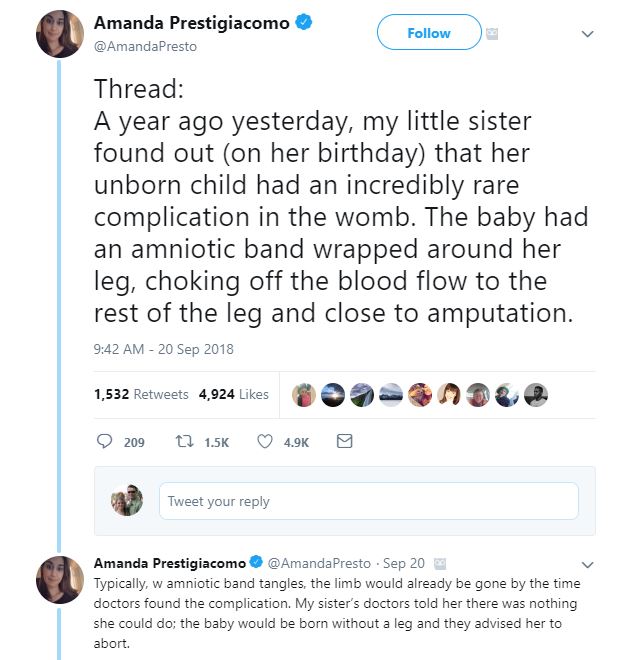 Prestigiacomo shared the story of her sister refusing abortion.

The family dropped everything to research this pregnancy complication and locate the best doctor and hospital to treat the baby. They found a team at Columbia who said they could perform emergency surgery to laser off the band and hopefully save the leg from amputation. They would also cut off other hanging bands that had the potential to cause damage – including wrap around the baby’s neck.

It was still prior to the gestational age considered “viability,” but doctors felt it would offer the baby the best chance. However, there was the risk of having to deliver the baby before she was ready, and doctors warned the baby’s mother that her daughter could die if there were complications. The entire family turned to prayer, and Prestigiacomo’s father dedicated Masses to the baby and her mother. Prestigiacomo’s sister packed a bag of baby clothes, full of hope for her daughter even if she was born prematurely. 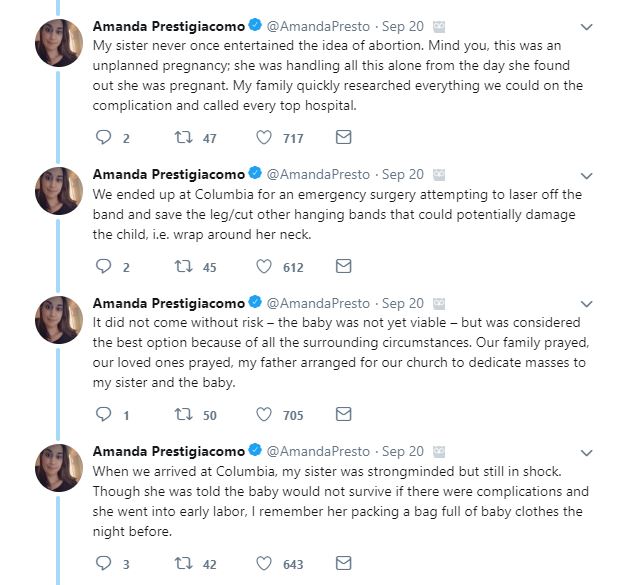 Prestigiacomo tells the story of how her sister refused abortion.

After they arrived in the surgeons’ office and an ultrasound was performed, a miracle occurred. Prestigiacomo, her father, and her sister saw a healthy preborn baby on the screen. The doctor was silent and brought in four other doctors to see the ultrasound.

“Finally, the doctors inform us that they have no idea how it happened, but the baby is perfectly healthy,” wrote Prestigiacomo. “Her legs are now identical in size. The band is gone. She’s kicking nonstop. There is not a trace of damage.” 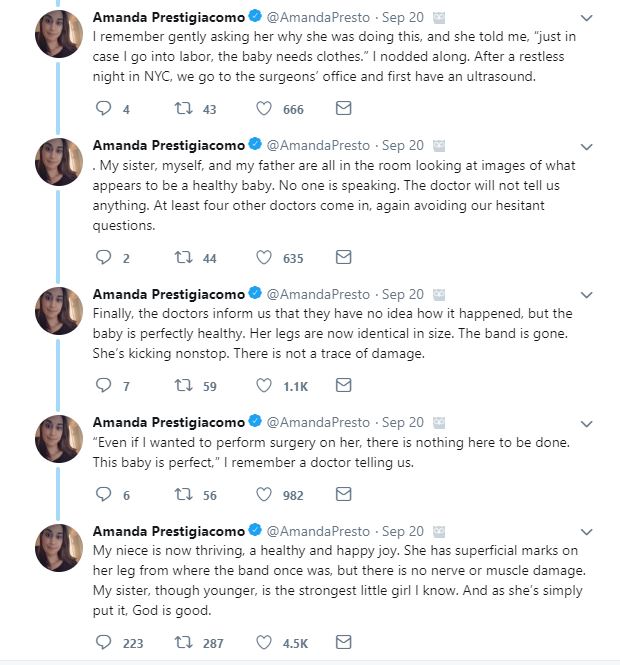 Doctors said there was no need for surgery and told them, “This baby is perfect.”

Now a year later, the baby girl is doing well and is happy and healthy. Prestigiacomo said she has “superficial marks on her leg” from where the band had been but her leg doesn’t have any nerve or muscle damage.

“My sister, though younger, is the strongest little girl I know,” said Prestigiacomo. “And as she’s simply put it, God is good.”