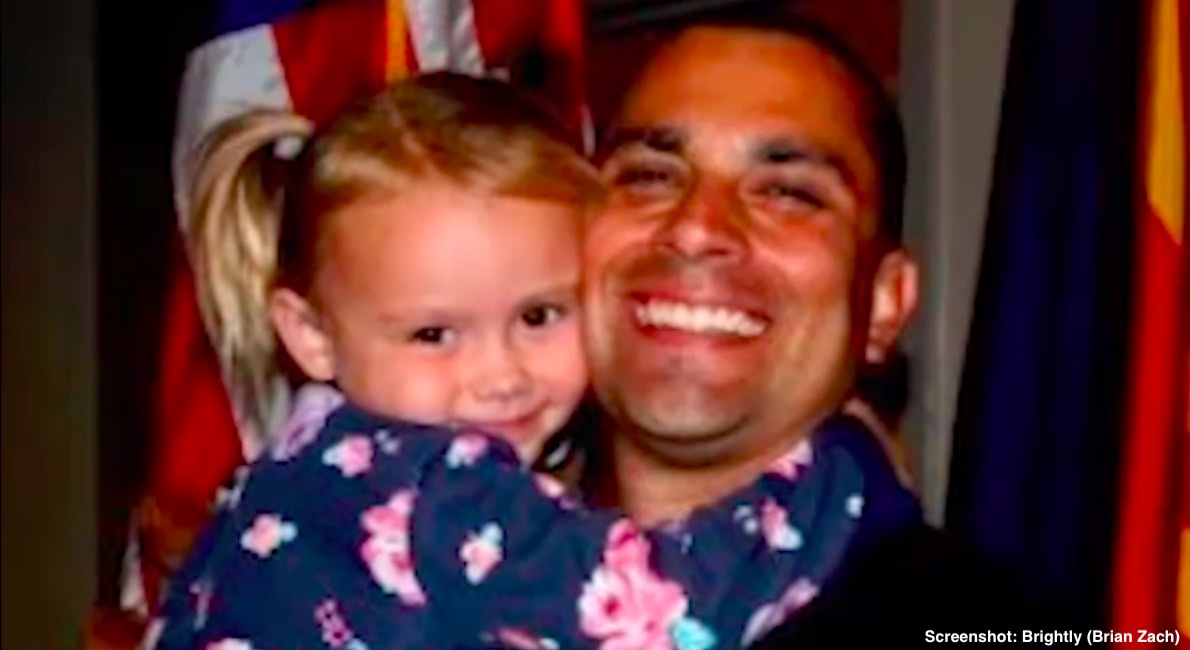 Two and a half years after first saving a toddler from an abusive home, an Arizona police officer and his family adopted the little girl. Lieutenant Brian Zach was a patrol officer in Kingman, Arizona, at the time. He responded to a residence check in March 2018, where he found a toddler who was living in abusive home.

Zach told Good Morning America that during the check, he and the little girl, Kaila, “colored [and] snacked … she held my hand and she was just this cute little thing.” Detectives soon arrived at the scene and took Kaila to the hospital for her injuries. According to Lieutenant Zach, criminal charges were filed against Kaila’s abusers.

After Kaila was treated, Zach and his wife Cierra and their two children decided to temporarily house her after Child Protective Services had difficulty placing her in a home. Zach told GMA, “She came with a sippy cup, a bag of clothes that didn’t fit her and that was it.” Within two days, Kaila was reportedly calling Cierra “mom” or “mommy,” and after about two weeks of calling him “guy,” she began to call Zach “dad.”

Before adopting her, the Zachs were unsure how long Kaila would be able to live with them and if or when her biological parents would come to take her back. Brian said their goal in the interim was “to love and care for this little girl for as long as it happened.”

A little over two years after first rescuing her, the Zachs were able to bring Kaila home permanently as their daughter on August 18th.

Since then, Lieutenant Zach and his wife have become strong advocates for fostering children. “I would definitely encourage people to do it because there’s so many kids who need guys even if it’s just for a small amount of time you can make such an impact,” Cierra said.

The Kingman Police Department honored Brian and Cierra’s decision to bring Kaila home. “Lt. Brian Zach’s commitment to public safety is exemplified in his commitment and love for Kaila,” said their Chief of Police Rusty Cooper. “Both Brian and his wife Cierra are amazing parents. They are committed to the service of others and a cause that is greater than themselves. We are proud of Brian and thankful that he and his family are part of the Kingman Police Department.”