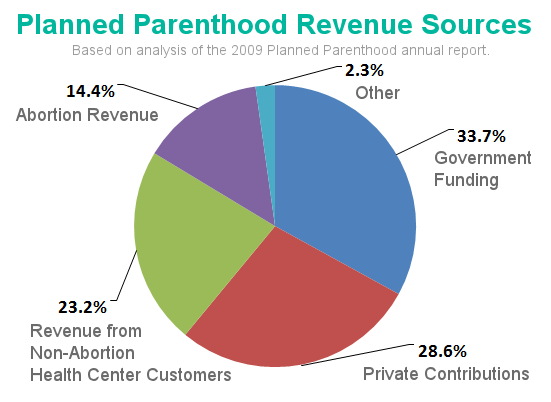 According to Planned Parenthood’s latest annual report (which happens to be for year 2008-2009) their revenue breaks down as follows:

All of this totals 1,100.8 million or just over 1 billion dollars. Of the 404.9 million that is “Health Center Revenue” about 38% of that is from the approximately 155 million that comes in from abortion. This leaves 250 million that Planned Parenthood collects from patients for non-abortion services. This means that approximately 23% (250 million divided into 1,100.8 million) of Planned Parenthood’s revenue comes from the paying, non-abortion patients at their centers. Without government funding and a robust abortion business, it isn’t likely that Planned Parenthood would be able to keep operating in its current form. In short, for Planned Parenthood to survive as-is, they are beholden to advance a robust abortion business and engage in controversial political involvement in an attempt to keep the taxpayer funding flowing.