The media reporting on the charges against The Center for Medical Progress investigators, David Daleiden and Sandra Merritt, might mislead the average citizen into believing these citizen journalists maliciously violated a clear law. However, a public records request of documents from that time tell an entirely different story, revealing that Planned Parenthood became very involved in helping the state of California change Penal Code section 632, making easier to charge pro-life investigative journalists in the future. Changes made during Planned Parenthood’s involvement also include a potentially heightened penalty in the specific section of the law Daleiden and Merritt are charged with, moving from a $2500 fine to a $2500 fine “per violation.”

Public records, acquired by Operation Rescue, show that it was Planned Parenthood’s own legal counsel that wrote a new portion of the law that Daleiden and Merritt are charged with violating. [Note: Daleiden and Merritt are charged with violating 632(a), which was enacted at the time of their investigative activities. Planned Parenthood was involved with writing 632.01(a) and also with making changes to 632 in general.]

CMP’s first investigation was released to the public on July 14, 2015. Later that week, Kathy Kneer, President and CEO of Planned Parenthood Affiliates of California, sent an email to then-Attorney General of California, Kamala Harris. 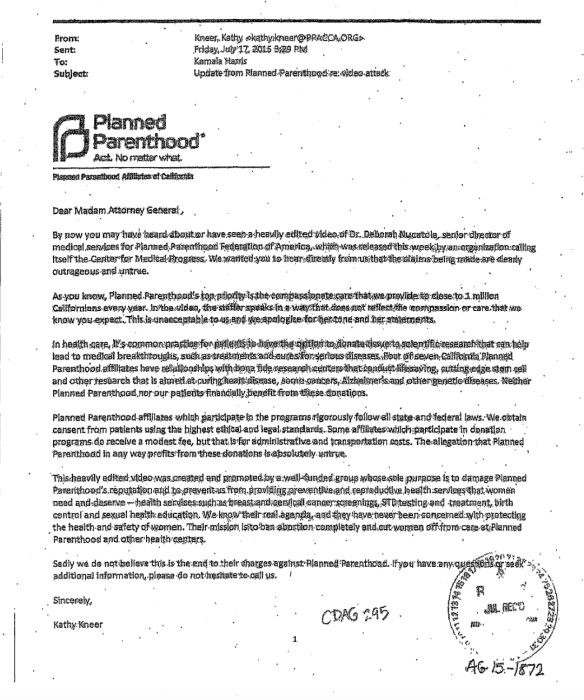 In her email, Kneer is sending Harris a preemptive strike against what is to come. Using the oft-repeated “heavily edited video” phrase, she also tells Harris at the end of her lengthy defense, “Sadly, we do not believe this is the end to their charges against Planned Parenthood.” It’s a perfect set up to put Harris on the defensive, too. And it worked very well.

Harris later announced a refusal to investigate the abortion corporation and instead went after Daleiden and Merritt, even as she was collecting signatures to support Planned Parenthood, as Live Action President, Lila Rose, said last year. It was not really surprising, however, as it had also been revealed that Planned Parenthood, as well as other pro-abortion groups, had donated heavily to Harris’ Senate campaign.

Harris did win her bid for the United States Senate (and is now being widely speculated to be examining a run for president in 2020), and Attorney General Xavier Becerra replaced her in Sacramento, continuing the pro-abortion legacy and conspiracy. Operation Rescue reports on the behind-the-scenes process of drafting the law that could be used to more heavily prosecute pro-life investigative journalists. Emails show multiple correspondences among multiple employees of Planned Parenthood to multiple employees of the California Department of Justice.

Here are a few examples, which can be read in entirety here: 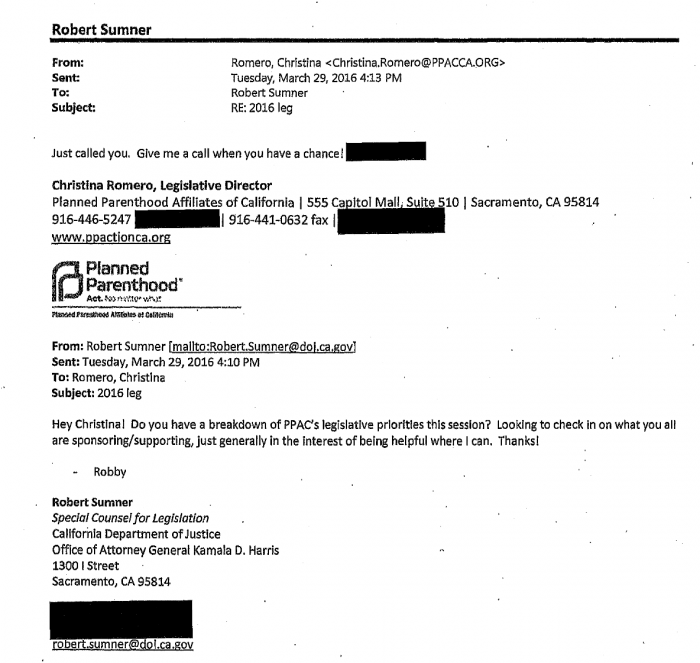 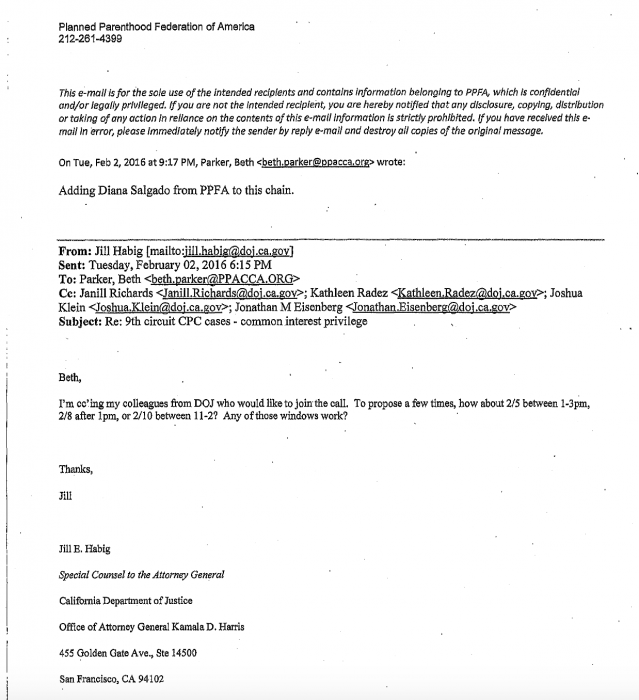 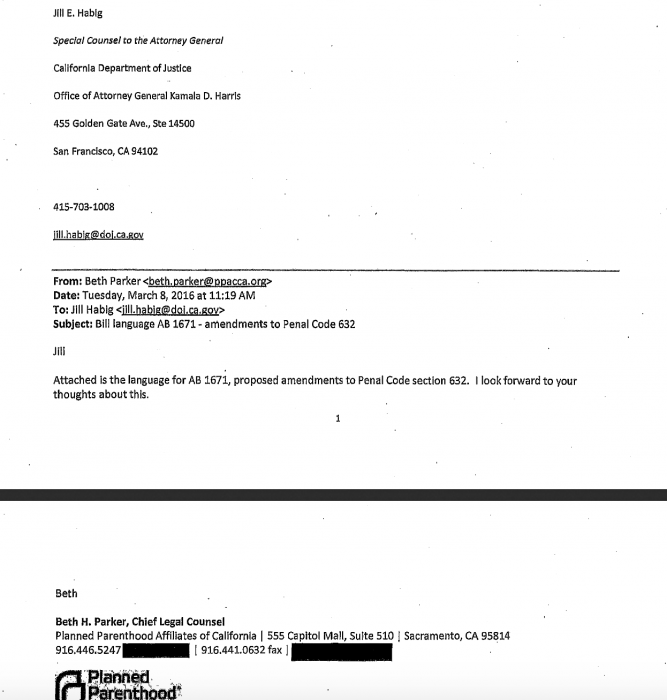 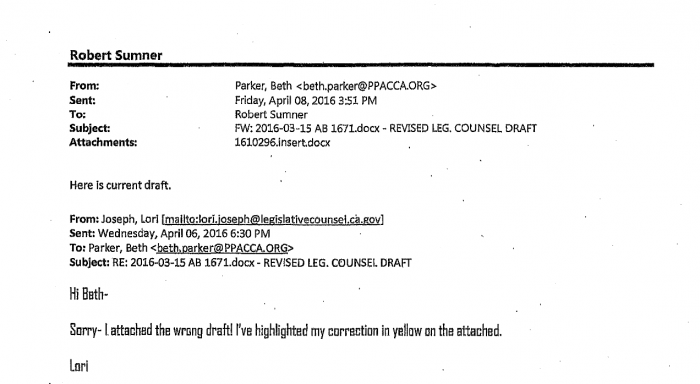 The documents obtained by Operation Rescue leave no grey area speculation; it is clear this is not an isolated incident that happened between a couple of unethical employees. This was a widespread plot to take down CMP and protect the abortion corporation in the future.

Operation Rescue reports on the result after all these emails and the behind-the-scenes discussion:

While the final text of the legislation was fine-tuned over the following weeks, it included all the points that Planned Parenthood had requested. The newly edited law was signed by Gov. Jerry Brown on September 30, 2016, after last-minute language was inserted to specifically exclude news organizations, which had complained about the bill. The law went into effect on January 1, 2017.

Operation Rescue’s Newman said, “California has opted to protect Planned Parenthood while making up a new law under which they could charge pro-lifers.”

It is apparent that state officials used their positions to implement a vendetta against people who exposed the truth about Planned Parenthood, purposing that nothing similar could ever happen again. At no time did anyone involved in the revealed correspondence so much as ask questions of Planned Parenthood. Instead, it was as if Planned Parenthood itself had taken over the California DOJ. Think about those implications.

These documents are only the last, though most indicting, in a stream of troubling evidence about what really happened in state offices in California. It is clear that the United States Department of Justice must step in now to investigate this situation and question those involved.

Editor’s Note: An earlier version of this article stated that the law wrote by Planned Parenthood was used to retroactively charge the journalists. However, the journalists were charged under a provision of the same law that was enacted prior to their investigative activities, and the article has been updated to reflect that. The article has also been updated to clarify that a change was made to the portion of the law Daleiden and Merritt are charged with that has the potential of significantly increasing their penalty.