But I thought they always had provided mammograms…not.

Due to the public backlash after Susan G Komen for the Cure dropped their donations to the abortion giant in January, Planned Parenthood is now claiming to correct its deficiencies in breast cancer screenings and truly help women by offering more extensive follow up care, such as mammograms.

Cecile Richards recently announced on YouTube that “[e]arlier this year, an outpouring of public support brought in more than 3 million dollars in contributions to support Planned Parenthood’s breast health work, and we’ve invested these donations into an expanded Breast Health Initiative that will support more women in need.”

The Breast Health Initiative advertises an expansion of services and programs, including:

Sarah Kliff of the Washington Post further quotes Richards, reporting: “Given the events of the last year, and the contributions that came in specifically around the conversation about breast health and our work with Komen, we felt it was important to use that money to expand access and education… We felt like we had a real opportunity here to do something new.”

But wait a minute…I thought Planned Parenthood already performed mammograms! If they have always done this, why is Richards now saying they are doing “something new“? After all, this is the very same Cecile Richards who appeared on the on the Joy Behar Show in 2011 and adamantly voiced her opposition to the bill threatening to defund Planned Parenthood, claiming that “[m]illions of women in this country are going to lose their health care access, not to abortion services – to basic family planning, m-m-you-know mammograms, cancer screenings, cervical cancer.”

I don’t know what makes me cringe more – the fact that Cecile Richards has been caught red-handed by publicly lying about her corporation providing mammograms and people actually believing her, or the part when she says that Planned Parenthood is “an American value in this country.” Either way, this is not the first time lies have been spewed by the likes of Cecile Richards. The saying “fool me once, shame on you; fool me twice, shame on me” seems fitting. The deception of the nation’s largest abortion provider needs to end, and it needs to end today. 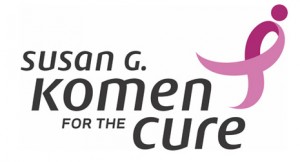 In Komen news, president Liz Thompson recently announced her resignation from the organization, making her the most recent one of at least six high-ranking executives nationwide to leave the charity. Beginning with the resignation of Komen’s policy chief Karen Handel just days after the decision was made to reinstate funding to Planned Parenthood in February, Katrina McGhee, executive vice president and chief marketing officer, quickly followed suit, as well as Nancy Macgregor, vice president of global networks and Joanna Newcomb, director of affiliate strategy and planning. Chairman of the foundation’s board of directors Dr. LaSalle D. Leffall, Jr. stepped down from his post as of March 31 but still remains on the board, and Dr. Dara Richardson-Heron, CEO of Komen’s New York City affiliate, announced her resignation in April.

Although no official statements have been released verifying the decision to reinstate funding to Planned Parenthood as the reason why these executives have resigned, the breadcrumbs easily followed. The negative effects on Komen’s overall legitimacy and reputation from flip-flopping on the issue are evident, and it is deplorable that Planned Parenthood’s bullying and scare-tactics have cost the charitable organization its top leaders, who truly want to help women and find a cure for cancer. Then again, it’s nothing unexpected from the largest abortion provider in our country. Instead of advocating donations of money for other (non-abortion-providing) Federally Qualified Heath Centers already equipped to provide breast exams and mammograms to low-income families, Planned Parenthood would rather hoard millions of dollars for itself that could have been used to provide for legitimate women’s health exams all along. And now they are claiming to do something about it? I’ve heard that before. Sounds to me like some people are afraid of being stripped from their funding after getting caught in a lie…again. Nice try, Planned Parenthood. Next?

In order to be truly pro-life, we need to support advancements in ethical medical technology to help save lives through both prevention and treatment alike. I would love to see a disease as devastating as breast cancer be obliterated from our reality. What I cannot support, however, is publicly funding an organization which makes close to 14% of its overall income from slaughtering unborn children. We need to support organizations that care for the life and well-being of both mother and child, as well as father, brother, sister, grandparent, etc. Planned Parenthood unfortunately is not one of these organizations. Do not be deceived by Planned Parenthood any longer.

Dear Planned Parenthood: the American people are not dumb. You have lied to us one too many times, and we are on to you. If you thought 2012 was bad for your public image and financial stability, get ready for 2013, because the pro-life generation of America is just getting warmed up.