In a recent email to its supporters, Planned Parenthood used the example of a Planned Parenthood of Southern New England health center trainer’s teen pregnancy to spotlight the non-existent need for abortion and to ask for donations.

The trainer (whom they call Natalie to protect her identity) reveals that she became pregnant at 17 and, according to the email, she wanted to abort. She knew, however, that her parents were going to “force” her to give birth. Her mother was even “excited” about her grandchild. Apparently, support and love from your parents in a time of stress and confusion is unacceptable to Planned Parenthood.

“I felt voiceless and alone… someone else decided what I should do with my body,” says the email. It goes on to say:

Natalie* did not have a choice about what she could do with her body when she discovered she was pregnant. Her family, who made the decision for her, withdrew her from high school so that she would bring her pregnancy to term.

When Natalie claims that “someone else decided what I should do with my body” we know that this isn’t exactly true. There is no claim of rape in the story, so we can assume that Natalie chose to engage in sex at a young age, willingly taking the risk of becoming pregnant due to this decision.

In addition, the laws of this land constantly tell us that for a 17-year-old child, parents are the ones who should make the decisions — except, that is, when it comes to sex and abortion. For those major life decisions, Planned Parenthood would rather parents stay out of the way. It’s the best chance they have at influencing teens to buy birth control and abortion from them. 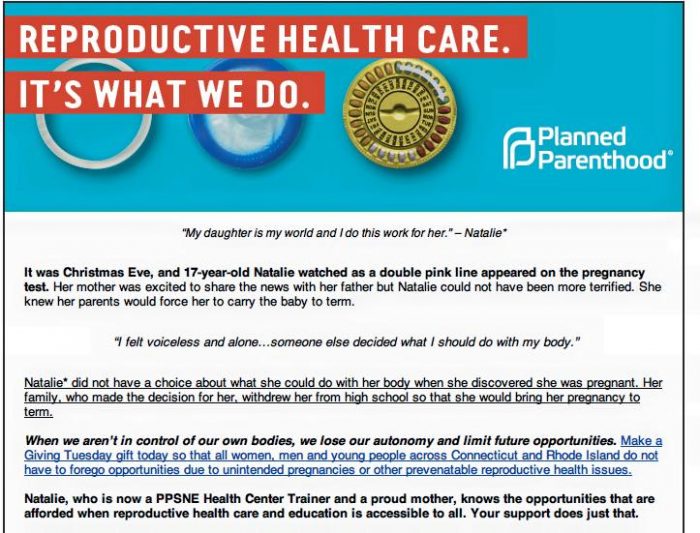 But besides all of this, science tells us that once Natalie was pregnant, there was a second person involved: her preborn child. That child, now her born daughter, had her own body with her own unique DNA right from conception. So if Natalie had chosen abortion, she would have actually been the one dictating what happened to someone else’s body. Her parents were simply accepting the fact that their granddaughter existed, and were allowing her to live.

Planned Parenthood says that when women are not allowed to kill their babies through abortion, they lose their autonomy and “limit future opportunities.” But it doesn’t seem at all that Natalie’s future was compromised, unless Planned Parenthood believes that working for Planned Parenthood is an unworthy career to have. (Probably unlikely that they feel that way.)

The email goes on to say that Natalie is a “proud mother.” A quote from Natalie reads: “My daughter is my world and I do this work for her.”

Planned Parenthood then asks for more money from its supporters… apparently so that people like Natalie don’t have to become “proud mothers” who work for them.

It’s ironic, isn’t it? Natalie is proud to be the mother of a child she wanted to kill, so now she works with Planned Parenthood to help ensure that other women don’t get to feel that sense of pride.

More than ironic, though, it’s actually cruel. Telling women that they aren’t good enough to succeed if they have children — when men are never told that — is sexist. And telling women that, although Natalie was able to succeed, they won’t be able to, so they should abort and deny themselves the pride and happiness that a baby would bring, is hypocritical.

Maybe instead of working for Planned Parenthood, Natalie should switch career paths and work for people who help teen moms like her – pro-life pregnancy centers, maternity homes, and other non-profits and pro-life health centers who do the real work of helping and lifting up women to be the best that they can, without sacrificing the lives of their children.