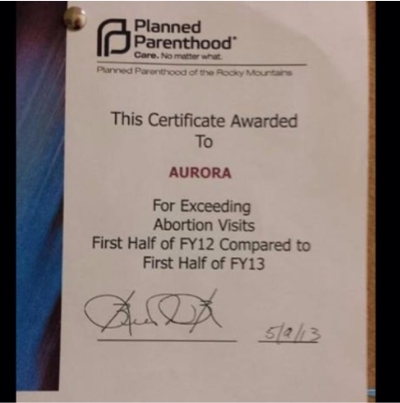 … As a nonprofit health care provider, our mission is to provide high-quality, affordable health care and education to as many people as possible. We aim to expand access to all of our services, and we commend our dedicated, passionate staff when they succeed in reaching more people who need care.

The organizations and individuals who have spent the last week trying to gin up a controversy about this have one agenda: To restrict women’s access to reproductive health care, including safe and legal abortion, birth control, and sex education. That’s their stated goal, so it’s no surprise that they’re “sickened and appalled” by the idea that more women are able to make their own decisions about pregnancy and have access to safe and legal abortion services.

Nobody does more than Planned Parenthood to prevent the need for abortion. We are proud to provide sex education and birth control to so many people. We are also proud to provide abortion services to women who have made the decision to end a pregnancy.

… So, no, we don’t have quotas. And, yes, we absolutely do celebrate our progress in ensuring that more people have access to the full range of reproductive health care, including abortion. And we always will.

Planned Parenthood may not have quotas, but that doesn’t mean they don’t get excited each time another abortion happens on their watch. It’s one thing for Planned Parenthood to refuse to apologize for providing abortions; after all, according to abortion advocates, it’s a woman’s right to get one. It’s quite another, though, to celebrate more abortions being performed.

Most people, even those who claim to be “pro-choice,” don’t see abortion as a good thing. Most agree it’s a tragedy, an awful situation that no woman ever dreams of finding herself in – which is why Planned Parenthood made sure to mention all they supposedly do to prevent women from needing to have an abortion.

As for all Planned Parenthood does to prevent women from needing abortions? Please. Their own annual report shows that abortion is what their business revolves around. They perform more abortions than anyone else in the country. Abortion makes up 94% of their pregnancy services.

If Planned Parenthood did so much work to prevent women from needing abortions, then why are they the nationwide leaders in performing abortions? Because they’re nothing more than a glorified abortion mill, that’s why. Because they reward affiliates for performing more abortions than they did last year (notice there doesn’t appear to be an award for “most abortions prevented”, or “most adoptions facilitated”).

Ok, they don’t have quotas. They just really, really like it when clinics murder lots of unborn children, and if you murder enough of them, they’ll reward you for it. Consider the record set straight.