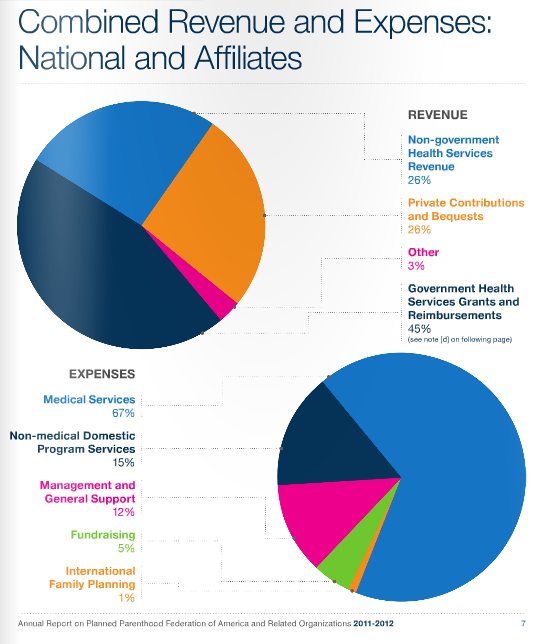 Bilking the system and killing innocents.

Americans often look with disdain on people who continually live off government assistance. While those from left to right would generally concur that welfare programs can be helpful for those in times of crisis, the majority of people grow weary, and even angry, when people live off of Uncle Sam for years on end.

This reality makes a mystery of the tolerance of Planned Parenthood’s dependence on Uncle Sam (and Uncle Obama). As we reported yesterday, Planned Parenthood’s latest annual report for the 2011-2012 reporting year shows that abortions were up by a few thousand. A total of 333,964 babies were killed in Planned Parenthood affiliates last year, and our government has helped line the abortion giant’s pocketbooks.

It’s no secret that Planned Parenthood receives both state and federal taxpayer funds, but somehow seeing it in full color in a season of American budget crises and the impending 40th anniversary of Roe v. Wade gives this reality more of an impact.

A full 45% of Planned Parenthood’s funds are attributable to “Government Health Services Grants and Reimbursements.” This amounted to $542 million last year. While a drop in the bucket of our federal budget crisis, it does remind us that the government prioritizes an abortion provider, whether the money is “technically” for abortion or not, in a time of economic crisis. 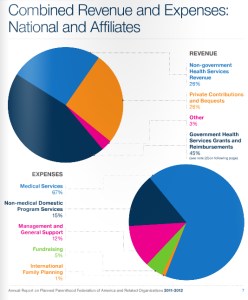 Astoundingly, however, Planned Parenthood isn’t suffering for money. In fact, the same report declares an excess of $87.4 million in revenue and $1.2 billion in assets.

Planned Parenthood’s financial prosperity is aided in great part by its hefty government contributions. Clearly, it is a business doing well enough on its own, yet, like a person who bilks the system and takes from the real needy, Planned Parenthood openly takes its government handouts, builds up its assets, and kills its 333,964 liabilities.

The question we must ask is how this continues to happen even as public schools, charities, and service organizations lose money. Is the nation really so unaware of the abundance of riches the abortion giant possesses? Or are merely misled by the media, which makes Planned Parenthood sound like a happy health organization?

There was much ado about the TIME Magazine story last week whose cover announced that abortion activists have been “losing ever since” their Roe v. Wade victory.

But are we winning? When we see a report like this from the number-one provider of abortions in the nation, we dare not rest on the idea that TIME says we’re winning because we keep introducing laws to restrict abortion. Certainly we have made extraordinary advances, but as someone pointed out, with the advances science has made, the question of life should have been settled a long time ago. Whether abortion is taking a life or not ought not even be a debate with the technology we have to show the beginning of life.

We aren’t winning until Planned Parenthood is defunded, until abortion is a bad chapter of history. We don’t win until the voiceless can speak. And as Planned Parenthood victoriously reported, 333,964 of them last year never got a chance to open their mouths.

The Susan B. Anthony List has created this summative PDF handout of the implications of Planned Parenthood’s annual report.