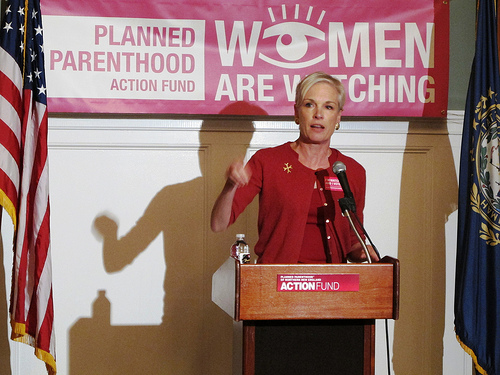 Shock and awe (and nonsense). 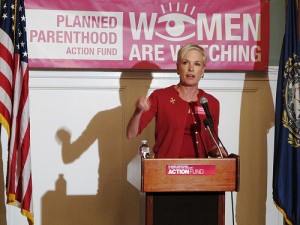 What do you get when you mix the eye of the watchful woman, a few too many pink shirts, a classless politician, and the world’s largest abortion chain? A Planned Parenthood rally, complete with anti-Romney condoms, lots of head-spinning, and misinformation run wild.

It featured a fleet of women, and some men, donning pink shirts with the words ‘Yes We Plan’ on the front.

The year ‘2012’ also appeared on the shirts, with the zero in the shape of a pack of birth control pills. The rally itself focused on women’s access to health care and abortion.

Volunteers at he event handed out colorful condoms in packages with the slogan ‘PROTECT YOURSELF FROM ROMNEY & RYAN IN THIS ELECTION.’ The package’s inside flap advised the user to ‘LEARN THE FACTS ABOUT ROMNEY & RYAN.’

I know I should no longer be surprised, but I can’t help being both amazed at and amused by Planned Parenthood’s never-ending focus on preventing children from existing and killing those who happen to get through the “lines of defense.” One would assume that an organization truly focused on “reproductive rights” might more often discuss prenatal care, maternity leave, or other pregnancy-related issues. You know, actual reproduction.

Since 82% of American women give birth at least once in their lives, I’d expect Planned Parenthood to give a little more thought, time, and attention to women’s pregnancies and births. Instead, when my friend went into Planned Parenthood for help during a wanted pregnancy, she was turned away and told they couldn’t help her if she wanted to keep the baby. Instead of recognizing that the vast majority of women need prenatal and maternity help at some point in their lives – 82%, in fact – Planned Parenthood would rather focus on the 28% who get abortions. Money is always a plausible explanation. Much more money is earned and much less time is spent in giving abortions to women instead of delivering their babies and/or providing ultrasounds, prenatal vitamins, and affordable health care during pregnancy.

But back to the rally. If you think the condoms lacked class, wait for Mayor Cory Booker’s speech. (As a side note, clearly there is nothing wrong with condoms or with responsible adults acquiring them. However, condoms have nothing to do with either Romney’s or Ryan’s policies and serve only to demonstrate Planned Parenthood’s obsession with all things sexual.)

Mayor Booker decided to rag on those silly pro-lifers who actually dare to claim that they “love women.” Pro-life women have already been referred to as mere “shiny packaging” by the chair of the Democrat Party. Apparently, pro-lifers cannot be true women, nor can they truly love women. National Review related Booker’s outlandish commentary:

‘That’s like saying you’re not a bigot ’cause you have a black friend,’ Booker retorted, drawing cheers and applause from the crowd. ‘That’s like saying I love Latinos, I go to Taco Bell every week. That is like saying that you are a person that is just and right because you know what, you like Jewish people.’

‘But I’ll tell you what you say, you say it with your words,’ he continued. ‘You say it with your lips. You preach it from on high. But when it comes to your actions, when it comes to your deeds, it comes to what you do every day, you are denigrating those very people you claim to love. And so I don’t understand how somebody can say they love women when they are denying women access to health care, when they are denying women strategies to protect their life, when they are implementing policies that undermine all the ground that we have gained,’ he concluded, saying he was speaking not only about women’s progress, but also about the country’s progress.

Now you’ve heard it from the country’s self-appointed mind-reader in chief, Cory Booker. Despite the claims that any pro-life person makes and despite how pro-life people live their lives, they are simply unable to love the women in their lives. In fact, unless a person supports all abortion for any reason whatsoever, he or she does not love women. Period. Such people are not allowed to make their own determinations on whether abortion actually might damage the women they love. Said people are not allowed to regret their own abortions and wish that no other woman might go through the horror they went through. They are not allowed to choose to protect their own children or their own wives, daughters, sisters, cousins, friends, or mothers through pro-life laws. No, in fact, if you are pro-life – according to Mayor Booker – it is essentially impossible for you to love women.

Thank you, Mayor Booker, for being ever-present in my life, at every moment, and assuring me that my brothers, father, and husband do not truly love me. It takes quite a bit of audacity and a lot of nerve for one person to suggest that no one with opposing views can possibly love the people in his or her life. But we’ve come to expect this kind of misinformation and lack of class from Planned Parenthood.

Nothing’s new at all – other than more evidence of an old organization, losing its power and trying to go out with as much shock and awe as possible…