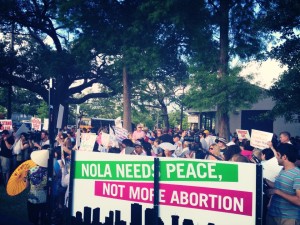 In Louisiana, the past few days have seen a flurry of pro-life and pro-abortion activity, centering on the proposed Planned Parenthood abortion complex in New Orleans. According to the NOLA Needs Peace Coalition – a coalition of Louisiana pro-life leaders which opposes the new center – the new Planned Parenthood will be 7,000 square feet and cost $4.2 million. It would be the second-largest abortion complex in the nation.

On Monday, an estimated crowd of 600 pro-life men, women, and youth met at the site for a press conference and rally. A former Planned Parenthood worker, Abby Johnson, spoke to the crowd, saying, “I am shocked when I see women who are obviously intelligent women, supporting the lies that Planned Parenthood has put on them. I am shocked that [I], as a very intelligent woman, believed that for so long.”

Close to 100 pro-choice activists lined the median across from the site, holding signs and chanting, “We want choice!” When pro-life activists tried to engage the protesters in conversations about Planned Parenthood and abortion in general, the organizers of the protest repeatedly yelled at them not to engage with “pro-life liars.”

House Resolution 105 (Representative Frank Hoffmann [R]) urges the Department of Health and Hospitals to immediately suspend Medicaid reimbursements to Planned Parenthood while the state pursues an investigation based on fraud allegations in other states. This resolution, however, does not hold the force of law; it is merely a recommendation to the Department. A floor debate on the resolution is scheduled for Wednesday, May 29.

Senate Bill 90 (Senator Fred Mills [R]) would outlaw the dangerous practice of “webcam” abortions in the state. While this practice is not currently being used in Louisiana, Senator Mills has expressed a fear that when the new Planned Parenthood begins offering abortions, it will include the so-called “webcam” abortions. This bill is also scheduled for a floor debate on Wednesday, May 29.

When asked for a comment, one Coalition member, Dorinda Bordlee of the BioEthics Defense Fund, said: “The NOLA Needs Peace Coalition applauds the Louisiana Legislature for advancing two resolutions that will have Planned Parenthood Gulf Coast investigated for Medicaid fraud allegations, and for the practice of imposing abortion quotas, as exposed in the hearing by Abby Johnson.”

On Wednesday, Planned Parenthood held a groundbreaking ceremony for the new center and also launched the new Twitter account for Louisiana, @PPLouisiana.