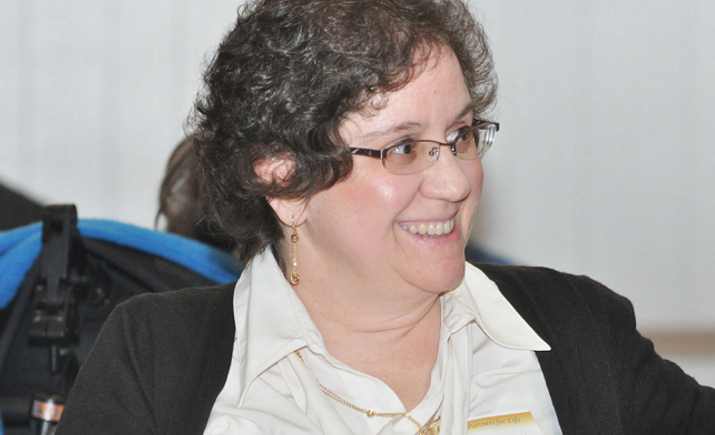 The full shocking interview with this former Planned Parenthood nurse can be read online at The Criterion, the newspaper of the Archdiocese of Indianapolis.

Do yourself a favor at read it carefully but not on a full stomach.

What happened, you ask?

According to the interview, when Anderson hired on at the Indianapolis abortion clinic she knew what Planned Parenthood did, although she was “kind of on the fence about abortion.”

Her journey seems to have started when some women came from the national office to teach them the conscious sedation process, described by Hoefer as “allowing clients to purchase mild to moderate sedatives to be given intravenously before an abortion.”

They were so gung-ho, it unnerved Anderson, it would appear.

It was disgusting. These two ladies had this chant they would do: ‘Abortion all the time!’ I thought, ‘I’ve got to get out of here.’ That was about six to eight months after I started.

“Those women from New York acted like an abortion was a rite of passage. They were like, ‘How can you not offer abortion to women? It’s their body. They should be able to do whatever they want. How can you force them to have a baby? Abortion should be free to anybody, anytime.’ ”

Worse yet there were real medical problems for the women, Anderson said, including one girl who “almost bled out. She was passing clots, her blood pressure was dropping.” (She explained that often this was a reaction to the sedation or excessive bleeding.) And, of course, mum was the word when something went wrong.

“When we had to call 911 for an ambulance, we were told never to say the word ‘abortion’ because they don’t want that broadcast. They knew that the calls were recorded, and could be made public.”

Anderson described the abortion clinic as a “money-grubbing, evil, very sad, sad place to work” where they’d be reminded.

“in our weekly staff meeting that we need to tell everyone [who called to schedule an appointment] to avoid ‘those people’ [the sidewalk counselors] because we need the money. We were to tell them, ‘Don’t make eye contact with them, and don’t stop in the driveway. If you make eye contact with them or if you stop and roll down your window, they’re going to try their darnedest to talk you out of it.’

And as you read in other accounts of former abortion clinic workers, the pressure to keep the abortion numbers up was unrelenting. Anderson said they were told

“You have to have so many [abortions] a month to stay open. In our meetings they’d tell us, ‘If abortions are down, you could get sent home early and not get as many hours.’

That pressure to keep the coffers filled resulted in law-breaking, according to Anderson, for example, allowing “girls to have ultrasounds that were obviously way too far along.”

“They said, ‘If they want to be seen, you just put them through, no problem,’ just taking advantage to make money.

“I was always getting in trouble for talking too long to the girls, asking if they were sure they wanted to do this.

“It was absolutely miserable going in there.”

It’s important that you read the interview in its entirety so let me end with this.

Anderson is asked, “What experiences stick with you?”

“One young girl came in with her mom. She was about 16. Her mom had made the appointment. That’s not supposed to be how it works. It’s supposed to only be the patient who makes the appointment. I checked her in, and she thought she was there for a prenatal checkup. The mom was pushing it. She blindsided her own daughter.

“This guy brought in a Korean girl. I had no doubt in my mind this girl was a sex slave. This guy would not leave her side. They could barely communicate. He wanted to make all the arrangements.

“During the ultrasound, she told one of the nurses that there were lots of girls in the house, and that the man hits them. She never came back for the abortion. I always wondered what happened to her. One of my co-workers said, ‘You’re better off to just let it go.’

“These girls would start crying on the table, and [the abortion doctor for whom Anderson worked] would say, ‘Now you chose to be here. Sit still. I don’t have time for this.’

“One doctor, when he was in the POC [products of conception] room, would talk to the aborted baby while looking for all the parts. ‘Come on, little arm, I know you’re here! Now you stop hiding from me!’ It just made me sick to my stomach.

“The sound the suction machine made when it turned on still haunts me.”

I have had many conversations with co-workers about the men (it’s typically men) who abort babies like they were working on a “meat-market style assembly line” (as two nurses who once worked at a Delaware Planned Parenthood abortion clinic testified last year). They are often really bizarre, disturbed individuals and “talking” to the remains of the baby they have just torn apart comes as no surprise.

Editor’s note: This article originally appeared at National Right to Life and is reprinted here with permission.