It’s said you can know someone by the company they keep. According to Planned Parenthood, this is what some of its male company looks like: 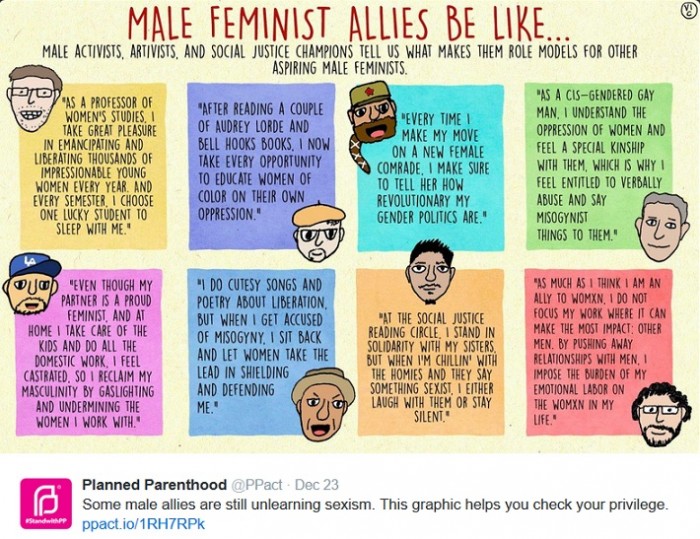 Apparently they’re an eclectic mix of professors who hook up with students, guys who laugh at sexist jokes, and dudes who saddle “womxn” with “emotional labor.” Still trying to figure out what that means.

America’s largest abortion chain was really nice to provide this helpful illustration, but it doesn’t tell the whole story. After all, the group’s fan base also includes men who say things like this…

For sexual predators, staying out of jail involves keeping their crimes hidden, so a baby bump can pose problems. Timothy Smith understood this, which is why he brought his 13 year-old stepdaughter to Planned Parenthood. She was well below the age of consent, but staff at the Colorado clinic didn’t think it was a big deal. One of them later admitted that “being thirteen and pregnant alone is not a red flag.”

Gary Cross understood it too. He also took his 13 year-old stepdaughter to Planned Parenthood after her mother noticed that she was gaining weight. Once again, employees failed to notify authorities, setting up an abortion instead.

Live Action’s Lila Rose proved that at a Memphis Planned Parenthood facility in 2008. Rose told staff she was fourteen and had been impregnated by her thirty one year-old boyfriend. A counselor responded by instructing her to lie about the man’s age when seeking an abortion. Staff at other centers displayed a similar attitude.

Of course, sex offenders aren’t the only ones with strong ties to Planned Parenthood; you can find plenty more on Capitol Hill.

The abortion giant receives over half a billion federal tax dollars annually, something pro-lifers want to change. We’re asking Congress to defund Planned Parenthood and redirect that money to the more than nine thousand federally qualified health centers (FQHCs) operating nationwide. They’re places that offer care to those with limited financial resources, and they do it better than Planned Parenthood. Whereas FQHCs provided women with more than five hundred thousand mammograms last year, Planned Parenthood performed zero.

If you need help finding an FQHC, visit GetYourCare.org. And if you want to join the fight to defund Planned Planned, then sign Live Action’s petition. Naturally, its “male allies” will be less happy. That’s usually a good sign.