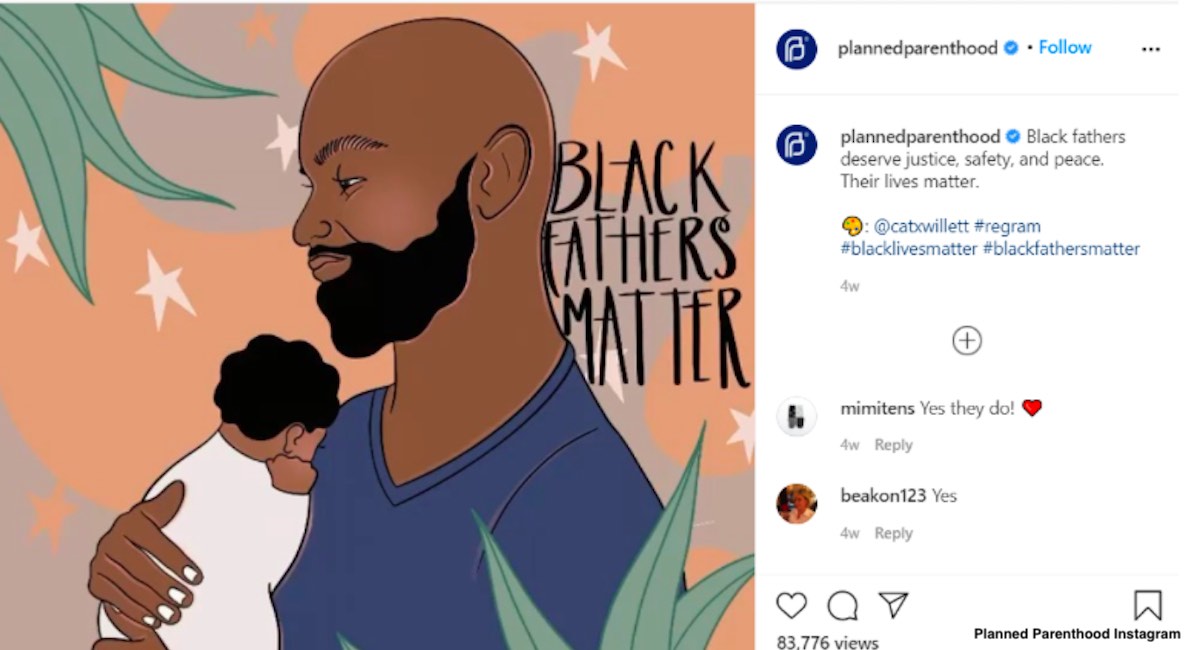 (Pregnancy Help News) I’ll admit it, I was shocked. I did not know Planned Parenthood felt this way. Much of Planned Parenthood’s rhetoric – when it comes to choosing parenthood – incites women to think only of themselves. The woman matters – period – plus no one.

But this post was different. And – drumroll please – I agree with it. I’m going to need to clarify, though.

A couple of weeks ago, Planned Parenthood’s Instagram post featured artwork of a Black man lovingly holding a newborn baby.

I could not agree more.

While Planned Parenthood trumpets this sentiment as if it were a novel and evolved opinion, pregnancy help centers have been saying this for years. Dads matter. They always have. From the beginning, God has ordained men with inherent value in the lives of their children.

You’re behind the power curve on this, Planned Parenthood. You can package this idea in modern art and tie it up with some current language, but it’s not your idea.

In fact, for years the pro-choice message has opposed this idea. Explicitly.

This current statement of solidarity with fatherhood seems duplicitous coming from an organization whose rallying cry has been, “My Right. My Decision.”

For years Planned Parenthood has reminded women that, when it comes to pregnancy, they are the only ones who mattered – not their babies and not the fathers of their babies.

The statement begs for clarity; Black fathers matter for what?

I know they matter to the social media campaign, but it’s not enough for them to matter only for marketing purposes. How do they matter practically?

And since they matter, when do they start mattering? Life begins at conception. Do they matter then?

You see, saying, “Black Fathers Matter” is easy. Allowing them to matter only when they fit into your mold for them – into the quiet little corner you have assigned them – doesn’t walk that statement out. Men don’t work like that. They were not created that way.

Men were made to be protectors and guardians. Fathers that matter get to have a say in the welfare of their children. Is that what you mean, Planned Parenthood? Because if fathers mattered to you, really mattered, then they would have a voice that you would hear when they say they don’t want their children to be aborted.

As our country is focused on elevating the marginalized who have had their voices silenced by a larger majority, I think I can say unequivocally that, concerning his preborn child, every dad can be marginalized. Regardless of race, ethnicity, religion, or socioeconomic status, the woman decides if he matters in the life of his preborn child.

Pro-choice advocates may be quick to point to the need to protect women from abusive men – but do not for a minute believe that only the bad characters are sidelined. They all are. The right to obtain an abortion is written into law while wholly excluding any objections of the father.

One of the quickest ways to devalue a group of people is to refuse to hear their voices. Consigning men to silence actually says, “You really don’t matter.”

Pregnancy help centers around the country encourage women to include the fathers of their babies in this hard – and important – work of making a pregnancy decision. They believe that women and men owe it to themselves and their children to have honest discussions about parenting. Honest discussions about all their options.

Pregnancy help centers see the devastating effects on men and their relationships when the pregnancy decision is made apart from them, with no evidence that they matter at all.

But understand, pregnancy help centers are not just looking for another voice in the pregnancy decision process. They work hard to layer in support so that the father has the tools he needs to matter throughout the child’s life. Connecting men to local fatherhood programs is an important part of the work they do.

Why? Why go this step? Because fathers matter. Really.

For decades, pro-choice advocates have rallied behind the idea of “Her Body, Her Choice.” This sentiment, drilled deep into the minds of the men in our culture, has an even broader impact.

Women facing unplanned pregnancies often ask their boyfriends or husbands for help in deciding what to do with their pregnancies. They want to decide within the relationship, not outside of it.

“I’ll support you in whatever you want to do.” That’s the man’s oft-spoken answer.

Women’s common response to this noble-sounding non-answer? Anger. Loneliness. Fear. How could it all be on her?

There is a simple, though biological-defying answer to her question. The pro-choice voice has been teaching him to answer this way his whole life. Again, and again, he has heard that it is her choice alone. The pregnant woman is the one that gets to decide if he matters as a father.

The pandemic has forced us to realize that, in life, certain people and services are essential.

Fathers will “matter” when they are valued as essential. That’s going to take more than a singular social media post with nice artwork and a timely caption.