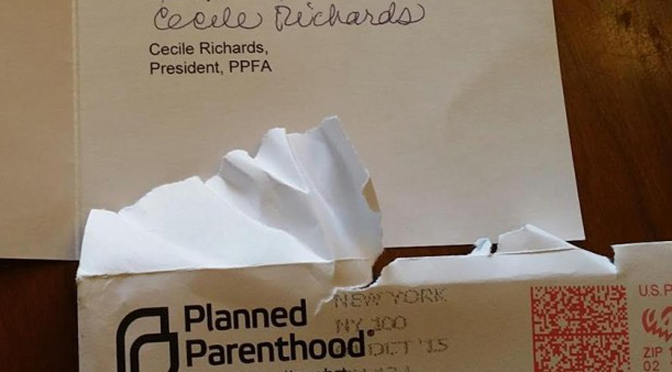 Remember the recent, odd trend in which abortion advocates mailed glitter bombs to pro-life groups in failed attempts to discourage them?

Or what about the ongoing pro-abortion fundraising efforts such as “Pledge a Picketer,” and “Adopt an Anti,” to try and discourage 40 Days for Life and other groups from going to abortion clinics to offer help to women?

Live Action News obtained the permission of the recipients to published their cards below.

Each states the following:

Planned Parenthood Federation of America (PPFA) is pleased to let you know that a generous and thoughtful contribution has been made in your honor by: [Name of contributor]

We send our warmest regards.

Cheryl Sullenger, Operation Rescue’s Senior Vice President, was the recipient of one of the thank you cards. “It just re-emphasized to me how desperate Cecile Richards and Planned Parenthood are and how effective our work has been,” Sullenger told Live Action News.

Operation Rescue has been in the forefront of the effort to expose Planned Parenthood. Their president, Troy Newman, sits on the board of The Center for Medical Progress, which is credited for the multi-year investigation uncovering the abortion giant’s baby body parts harvesting operation.

Another recipient was Rusty Thomas, National Director of Operation Save America (OSA), who says he suspects he received the card because OSA has concentrated a lot on Planned Parenthood since the Center for Medical Progress videos uncovered their baby harvesting atrocities. A card was also sent to Abolish Human Abortion activist Todd Bullis. AHA members oppose abortion but do not refer to themselves as ‘pro-life.’

Bullis says he assumes the person who made a Planned Parenthood contribution in his name must have thought it would bother him. It didn’t. There seems to be no legitimate reason to contribute to Planned Parenthood in the name of someone who opposes abortion – unless of course, the donor wants help Cecile Richards continue to earn her hefty six digit salary.

Opponents of Planned Parenthood say that they are more determined than ever to topple the industry which slaughters children and sells their parts for research.

Operation Rescue’s Cheryl Sullenger finds the cards signed by Richards to be a sign of their organization’s effectiveness: “If we were ineffective, she wouldn’t bother to try play ridiculous mind games with us. It’s encouraging!”