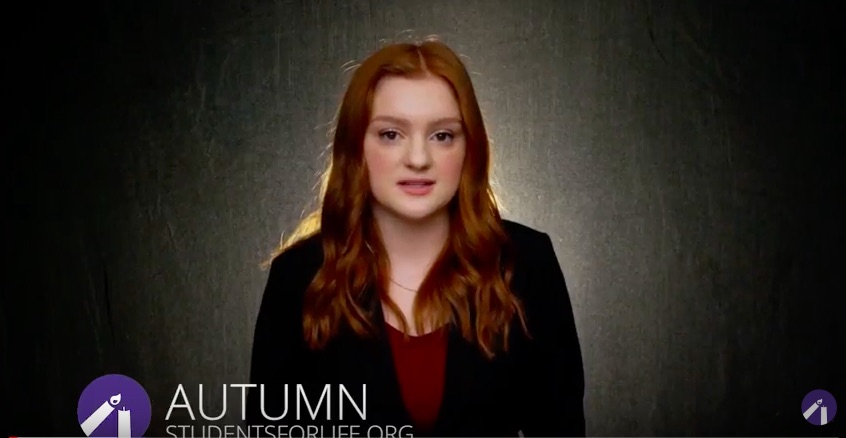 (Students for Life of America) — Teen Vogue recently ran a story on supposedly great ideas for a friend who just had an abortion. In reality, there were no good ideas, only ridiculous suggestions that were overtly political (an F-U-terus pin and a coloring book of liberal Supreme Court Justice Ruth Bader Ginsburg). SFLA did our own slideshow in response, which contained actual helpful advice, no politics involved.

Then Autumn came along. She had something to say about that Teen Vogue story.

Autumn is in high school. She’s passionately pro-life. And she’s smart, engaging, and is about to become Planned Parenthood’s biggest nightmare.

Why? Because this is what the next generation looks like on the issue of abortion – and the abortion industry is going to have real problems facing that down.

This is the generation that Autumn represents and that the abortion lobby saw coming years ago.

Outgoing NARAL president Nancy Keenan said in 2012 that she saw an “intensity gap” among young pro-lifers versus young pro-choicers, whereas those young pro-lifers were more passionate about their position than their counterparts in the pro-choice movement. In 2010, Keenan told Newsweek that she was shocked by the number of young people at the March for Life: “I just thought, ‘My gosh, they are so young.’ There are so many of them, and they are so young.”

Students for Life of America surpassed the 1,000 group mark last year, our 10th year in existence. Planned Parenthood celebrated 100 years last October and do you know how many groups they have? 275.

If you still have doubts this generation is winning, think of the Women’s March. Planned Parenthood was a main sponsor. They had a speaker wear an entire dress as a political statement about her love for abortion. And marchers spit at us, tore up our signs and screamed at us because we dared to hold signs that said “Abortion betrays women” and “We Don’t Need Planned Parenthood.”

Then look at Autumn. Listen to what she says and how she says it. She is firm but compassionate and confident. She knows without a doubt what she says is the truth and she’s fearless in proclaiming that truth. And she is so young!

She is Planned Parenthood’s worst nightmare.

This is the generation that they are going to have to contend with: an educated, articulate and passionate one versus an army of p*ssyhat-wearing grandmas.

Editor’s Note: This article was first published at Students for Life of America on February 20, 2017, and is reprinted here with permission.