Better to pray for their conversion.

Last week, abortion advocates celebrated “National Abortion Provider Appreciation Day.” That’s right, folks: there is a whole day dedicated to physicians (abortionists) who throw the Hippocratic Oath (“I will not give to a woman an abortive remedy“) out the window to make their living off blood money.

Today is the National Day of Appreciation for #Abortion Providers. We appreciate these courageous professionals today and every day. #NDAAP 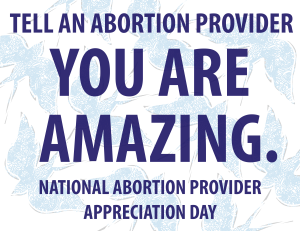 Support also bellowed from “Amplify,” an organization that advocates for youth by promoting abortion (there are so many reasons why that statement is backwards), which provided its followers with several images like the one pictured to the right. The site invites people to print out one of the images and then hold it up as they grin for the camera, and e-mail their photos to someone at the organization. The photos would then be delivered to local abortionists as a symbol of community support. If it isn’t creepy enough to imagine handing an OB/GYN photos of random people saying he is amazing precisely because of the procedures he does (bimanual pelvic exam, anyone?), consider the reality that this physician has dedicated his life to dismembering and disposing of his patients’ babies.

The pro-life community didn’t pass up the opportunity to join in the fun, of course.

In a satirical post at The Bertha Wilson Motion blog, abortionists were “promoted” by linking their names to pages about topics like their indictments for murder. The blog prefaced the list with this statement, poking fun at the irony of the day:

We think it’s time to join hands and give a shout out to the many abortion providers out there who, no matter what, enjoy the love and support of the “pro-choice” movement in North America.

At the end of the day, though, the abortion profession is no laughing matter. We know that many abortionists are traumatized by what they do on a daily basis. While all physician’s offices end the day by taking out the trash, it is the abortionist who goes home at night unable to escape images of the tiny, beautiful, lifeless humans that he spent his day filling the trash and bio-hazardous waste with. This is what sets abortionists apart from all other physicians. Abortionists may have one day of appreciation every year, but for us, every day is dedicated to prayer and work for their conversion.