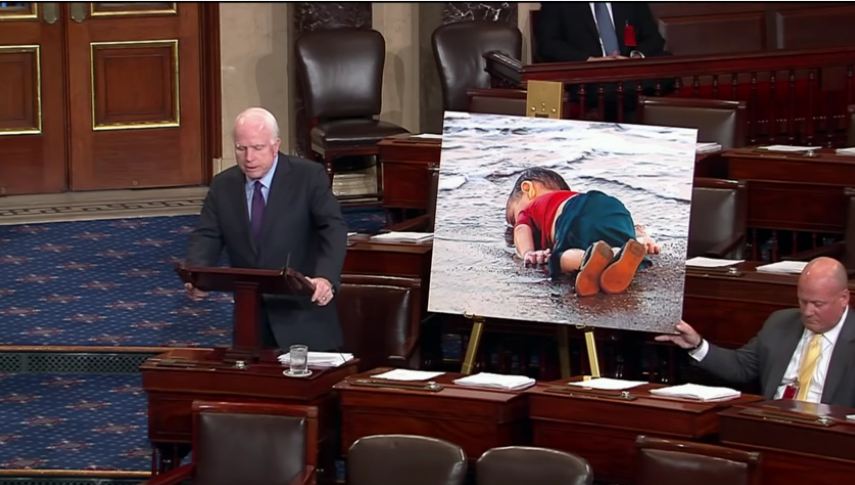 During a speech on the Senate floor, Arizona Senator John McCain used the photo of Aylan Kurdi, a three-year-old Syrian boy alleged to have drowned while fleeing his home among other refugees, to draw attention to the refugee crisis in the Middle East. McCain stated:

This photo, this photo, which was taken shortly after Aylan’s dead body was washed ashore, has opened the world’s eye to this devastating crisis. Within hours of this photo being posted, people across the world began to share it on social media using a hashtag in Arabic that translates to “humanity washed ashore.” This image has haunted the world….

I was heartbroken when I saw Aylan’s photo, as were millions of others across the globe. But none of us would have seen the photo had the media been consistent in its view that images of dead children should not be shown publicly.

As the head of a pro-life organization who is often the target of attack for showing images of abortion victims, Harrington made a correct observation. Imagine for a moment seeing any child injured or dead and not aching with compassion. What response would be expected after such an image is presented?

To me, each child, created for a special purpose, is not simply a “photo” or a “news story.” Each is very real. This is exactly why I speak for unborn children targeted for death inside the womb.

Abortion became personal several years ago when I saw a dead child up close – when I held his tiny, broken body in my own arms and wept. Sadly, this child was among several others who suffered the same plight. This child was neither clothed nor intact, and there was no photographer waiting to tell his story. He and the children he was with were ripped into pieces and buried in a heap of trash, in a place of darkness and waste – senselessly killed inside an American abortion clinic and discarded by staff into a dumpster. Out of respect for these children, I chose to search for the broken bodies of these children to make certain they had proper burials.

So when I and other pro-lifers display images of of aborted children, it is not because of a lack of respect for them, their pain, or their stories. It is the opposite.

When society rejects our abortion victim imagery, they do so with great hypocrisy. If they believed their own criticism, they would equally lecture against others who show images of deceased children. They understand that when a people group resorts to slaughtering innocent children it is beyond time to speak out – it is time for action.

For many, the plight of the boy in the red shirt haunted them and made them uncomfortable enough to look deeply – to question their politics, position, and humanity. This is also the goal of pro-lifers who display the images of abortion victims. Children are children whether born or unborn, and human compassion should invoke a pause when they are killed, whatever the circumstance.

When I think about the victims of abortion and I see the Syrian boy, the words of author Joel Rosenberg sum up my feelings best:

“Darkness is falling. Innocent babies are dying and the world does nothing. #Assad #ISIS #Syria #PlannedParenthood”

What is happening to children – including babies in the womb – is wrong. If the photo of one dead child washed ashore can open the world’s eyes, so too can the images of abortion victims.