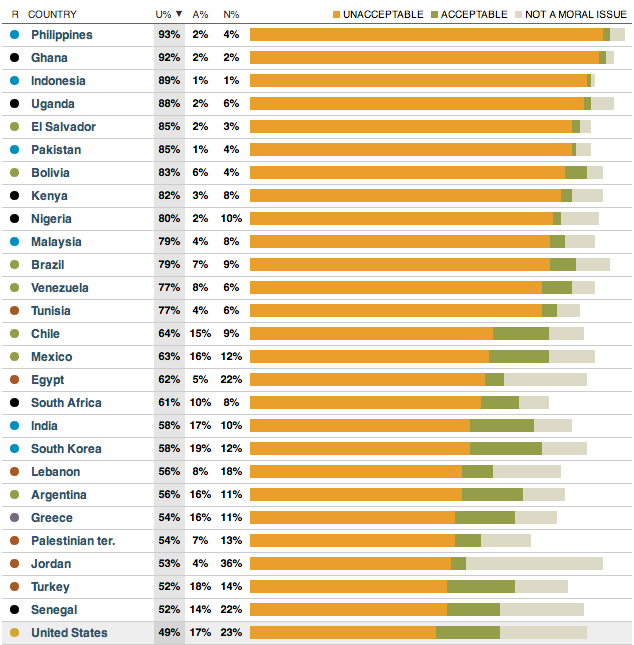 A survey released this week by Pew Research Center indicates that 56% of people in countries around the globe believe abortion is morally unacceptable. The study, which surveyed 40,117 respondents across 40 different countries, found widespread opposition to abortion, with a significant majority of respondents calling it morally wrong.

In fact, not a single nation in the 40 countries surveyed had a majority who believed abortion to be morally acceptable.

Several countries that have either adopted holistic protections for human life in their national constitutions or heavily restrict abortion were among the most pro-life. Countries like El Salvador, Bolivia, Uganda, Kenya, and the Philippines registered the highest levels of opposition to abortion. Based on survey responses, a striking 93% of the population of the Philippines believes abortion to be a moral wrong.

This news is sure to exasperate global abortion-peddlers at the United Nations, who have spent millions upon millions of dollars trying to push abortion into developing nations. Clearly, trying to convince these countries to legalize the killing of unborn children is a harder sell than the U.N. Population Fund and the International Planned Parenthood Federation expected.

Even in countries where abortion has been foisted upon the people, the majority of the population remains pro-life. Sixty-one percent of South Africans oppose abortion, despite their legal abortion regime. Despite their vast financial and political resources, Planned Parenthood’s international agitation has failed to win the hearts and minds of people in many countries around the world.

In order to maintain these strong pro-life majorities, we need to renew our efforts to provide local pro-life activists with the information and resources they need to reach local populations. And we need to let international decision-makers at the United Nations know that sound majorities in countries around the globe oppose the U.N. abortion agenda!