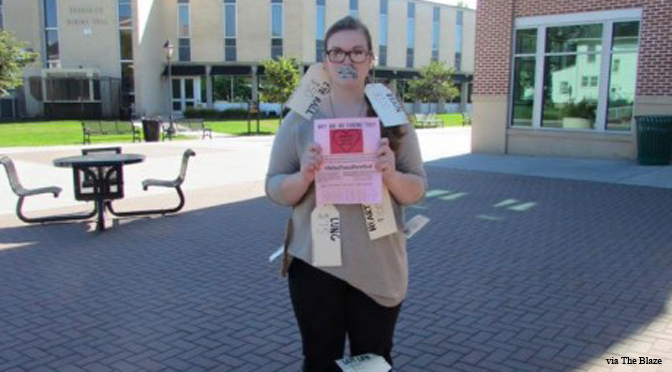 Kaytee Moyer, a non-religious college student, did what the White House and the allies of Planned Parenthood in Congress have chosen not to do: she watched the Center for Medical Progress’s undercover videos. That decision changed everything for her.

The Blaze interviewed Moyer, who decided, after viewing the videos, that she could not simply ignore what she had seen and heard. Instead, she organized a protest with some “conservative friends” at Millersville University of Pennsylvania. Unfortunately, those friends bowed out at the last minute, leaving her with a choice: cancel the protest or protest alone? Moyer’s flier (photo via The Blaze)

The Blaze reports that Moyer’s decision was to stage a one-woman protest:

Before seeing the controversial clips, Moyer, 25, who said that she is not a religious person, had avoided the abortion issue altogether. But something about the contents of the undercover videos led her to abandon her silence.

“Watching those videos made me realize this has nothing to do with religion, but everything to do with whats moral and ethical,” she said. “Forcing myself to sit through those videos and hear about what really happens was excruciating, but more impactful than I think I can honestly put into words.”

After her friends backed out:

… [O]n October 5, [Moyer] stood at the busiest intersection on campus and handed out fliers, but that’s not all. Moyer also pinned specific price tags to different areas of her body, seemingly mimicking claims that Planned Parenthood has been selling fetal body parts.

Moyer says she also handed out flyers to students in the cafeteria during lunch, and that their reaction was “overtly positive,” with people “shaking their heads in disgust when they read her flier,” which surprised her. But not all reaction was positive:

“The only negative reactions came from people that didn’t read the flyer. They saw Planned Parenthood and scoffed or crumbled up the flyer,” she said. “But the impact that I saw the knowledge having on my fellow students far outweighed those two minuscule reactions.”

Moyer told The Blaze that the most difficult part of her protest was “standing alone.”