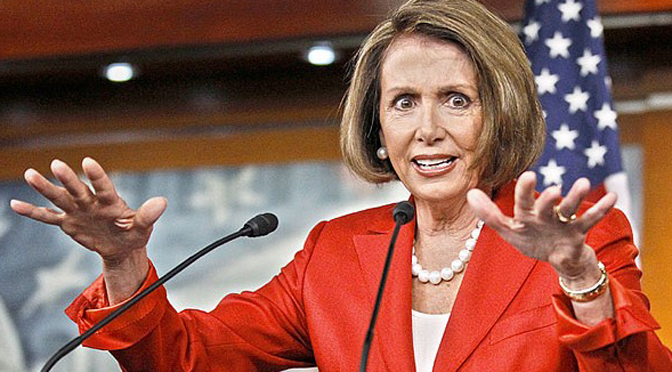 Nancy Pelosi is on a roll. Last week she lamely rationalized identifying as a Catholic while spitting on one of her faith’s gravest moral teachings, and this week she doubled down on her worship of abortion in particularly disgruntled fashion. As Kelli reported on Thursday, the House Minority Leader got a simple question from a reporter, and her non-answer said far more than she intended…

REPORTER: Leader Pelosi, in reference to funding of Planned Parenthood, is an unborn baby with a human heart and a human liver a human being?

PELOSI: Why don’t you take your ideological questions…I, I don’t, I don’t have, look—

REPORTER: If it’s not a human being, what species is it?

PELOSI: You know, listen, let me just say something to you. I don’t know who you are, and you’re welcome to be here and freedom of this press. I am a devout, practicing Catholic. A mother of five children. When my baby was born, my fifth child, my oldest child, was six years old. I think I know more about this subject than you, with all due respect. And I do not intend to respond to your questions, which have no basis in what public policy is, that we do here.

The subtext is more revealing. Pelosi gets visibly angry at the mere act of questioning her about a hot-button policy issue on which more than half the country disagrees with her. She is so dogmatic that she snaps at the reporter for being “ideological” and sneers that he must know less than she does, as if the question was intrinsically unseemly—with no respect for the concept that a major elected official’s views on an issue’s nuances or her response to the major objections about it might be newsworthy regardless of which answers one prefers.

More importantly, Pelosi is so arrogant that she doesn’t even feel the need to pretend to answer the question. There was absolutely nothing here that could even be stretched to construe as remotely responsive to “when is it a human being”—not even some lazy boilerplate about nobody really knowing when life begins. It was so egregious that if you showed this to average Americans, even most of those confused or undecided about abortion would notice that it’s a dodge.

On some level, the arrogance was almost inevitable—Pelosi comes from such a safe, extremely liberal district where she’s consistently been winning reelection by around 80% for ages, and she hasn’t had to really earn her position or defend her positions in a serious contest in a long time. It may be that she didn’t make a case for abortion because she truly doesn’t know how to anymore.

From that comes the most important takeaway here: there’s another reason besides arrogance Pelosi gets so defensive about her abortion absolutism: fear. On some level, she knows how morally, intellectually, and rhetorically bankrupt her stance is, and feels the need to preemptively lash out at the first hint of a threat.

Memo to inept and aimless Republicans: this is your opening.

This should tell every pro-lifer on Capitol Hill that they aren’t the ones who should feel afraid and insecure; that like all bullies, the pro-aborts’ façade of confidence will shatter if you just apply enough pressure.

Don’t plead with Pelosi and their underlings to respect your difference of opinion, don’t chuckle or mildly chide them for supporting Planned Parenthood as if Big Abortion is no worse than being in the pockets of the trial lawyers, the gun lobby, Big Business, or the teachers’ unions. Tell them they’re lying, that they reject science, that they know it’s a life, that they don’t care about women, and that they’re killing children.

In person, on the House and Senate floor, to their faces.

Make their responsibility for this death and suffering the issue, and don’t relent until they snap. Trust me, if you thought Pelosi let the mask slip here, you haven’t seen anything yet.

You know, you just might be surprised what happens when you’re the ones projecting confidence for a change.