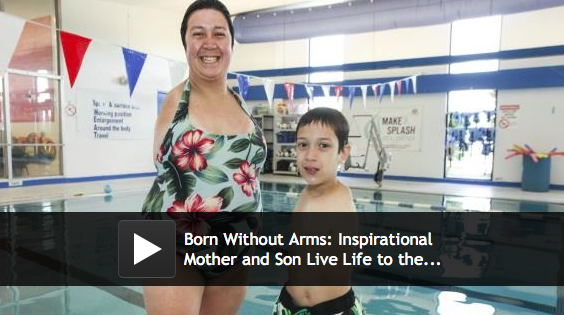 Like many young couples, Richard and Linda Bannon wanted to have a family of their own. But Linda, the oldest of five children, was born with Holt-Oram syndrome. Holt-Oram syndrome is “characterized by skeletal abnormalities of the hands and arms (upper limbs) and heart problems.” For Linda, it meant that she was born without arms.

Holt-Oram syndrome can be passed down to a child, even if just one parent has it. Through ultrasound images, the Bannons learned that their son also had Holt-Oram syndrome. Little Timmy, too, would be born without arms.

Despite her disability, Linda says that her lack of arms has hardly affected her life at all. She was blessed to grow up with parents who treated her the same as they treated her siblings, and she also met and married her husband, Richard – a man who genuinely loves and cares for her – in her early twenties.

Linda shares that abortion was suggested to her and Richard as an option for Timmy, but she says:

[I]t was never even a consideration of ours. We want a family. We want to have a baby.

Perhaps it was strange for Linda to hear a doctor suggest that she might want to kill her baby boy who was just like her. Linda leads a happy and fulfilled life, and she personally knows that a lack of arms does not stop a person from being a very loved individual with a wonderful life.

Sometimes, those with disabilities see more clearly than the rest of society. This is true in Linda Bannon’s case. She (and her husband) saw the value of little Timmy long before his birth. They saw past his lack of arms to the valuable little person he already was and always will be.

The Bannons wanted “a baby.” They did not expect “a perfect baby” who was required to be 100% perfect in the eyes of the world. Instead, they expected that their baby, no matter his disabilities, would be loved.

And Linda and Richard continued saying “yes” to life, no matter the difficulties that arose.

Little Timmy had heart surgery at eight days old, and stayed in the hospital for two months. But, as the narrator of the video below states:

[D}espite his difficult start in life, like his mother, Timmy would not allow his disability to get in the way.

While it is clear that Timmy will experience hard circumstances and trying times throughout his life, what matters is that he is alive. His mother worries if he will find companionship one day, but many, many parents have the same worries for their “normal” children. Many elderly people need someone to care for them – disabled or not. Timmy is really not that different at all.

And, thanks to his parents’ choice for life, Timmy Bannon is here to experience the good and the bad of life. He is here to swim, to go to school, and – even if he couldn’t do a single “normal” thing – he is here to know the love of two parents who chose life for him despite the odds or any doctor’s opinion.