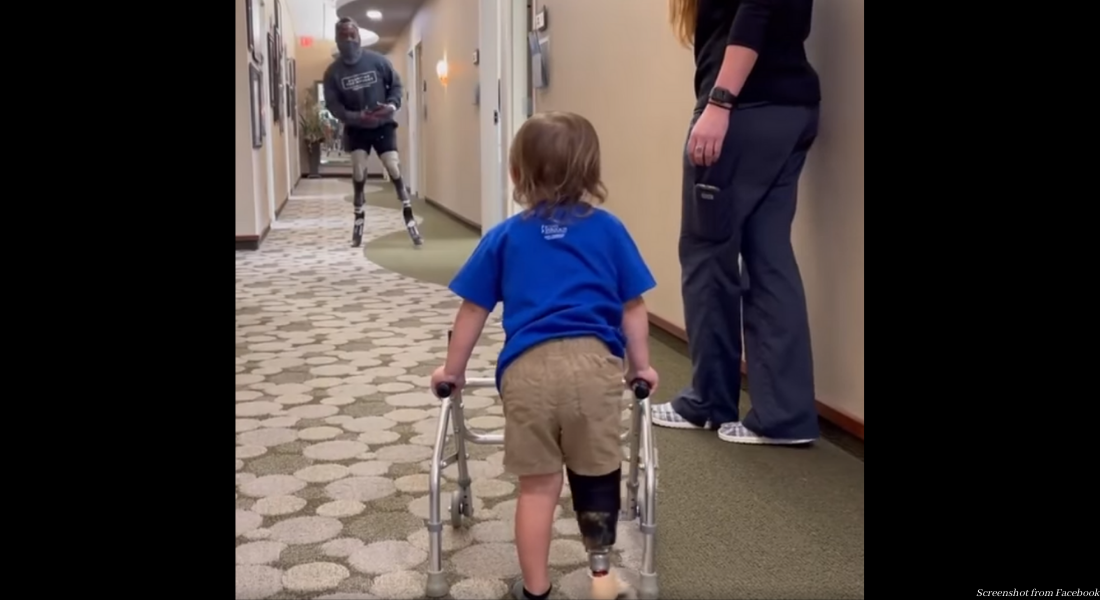 Blake Leeper, a Paralympic medalist and world record holder, was in the right place at the right time to make a little boy’s day. KJ Dyer was taking his first steps with his new prosthetic leg, and Leeper made sure to cheer him on.

Leeper is the world’s fastest amputee, having previously beaten Oscar Pistorius’s world record with goals of one day competing in the Olympics, as Pistorius did in 2012. He’s been working with Scott Sabolich Prosthetics in preparation for the 2021 Paralympics in Tokyo.

While there one day, Leeper heard laughter coming from the hallway and went to investigate. Randy Titony, the director of marketing for Scott Sabolich Prosthetics, captured the entire encounter between Leeper and little KJ on video.

“Blake Leeper, the world’s fastest amputee came to us about 4 years ago, and after we made his new running prostheses, he broke world records,” Titony said. “He returned a few weeks ago for some new legs in his quest to run in the Tokyo Olympic or Paralympics. While at our facility, he met KJ, a little boy receiving his first prosthesis following an accident.”

Wanting to show KJ some support, Leeper cheered him on from the hallway. “I got my legs on now! I am ready! I’m ready for you!” Leeper said. “You’re doing great! You’re doing awesome! Look… mine look like yours!”

KJ’s mother, Chelsea Dyer, told ABC News that getting to meet Leeper was inspirational for them all. “It was just an amazing experience for us as parents and for getting to see somebody to inspire him, and actually, it helps encourage him at home,” she said. “He’s doing great and he only had to have the walker the first day. Ever since we’ve been home he’s been a very determined boy.”

And Leeper’s encouragement has helped. He sent KJ a follow-up message to help keep him working hard. “Keep fighting, buddy,” he said. “The next time I see you, we’re going to race. You better be ready!”

Leeper also posted the video on his Instagram page, with another sweet message about the heartwarming moment. “This right here is my motivation,” he said. “I promise to keep grinding and fighting so young KJ will have every opportunity to compete at the highest level!!”

While many view disabilities as something that will ruin a person’s life, people like KJ and Leeper are proving that the opposite is true. There may be difficulties, but with help and a little encouragement, those difficulties can be overcome, and anyone can accomplish anything.