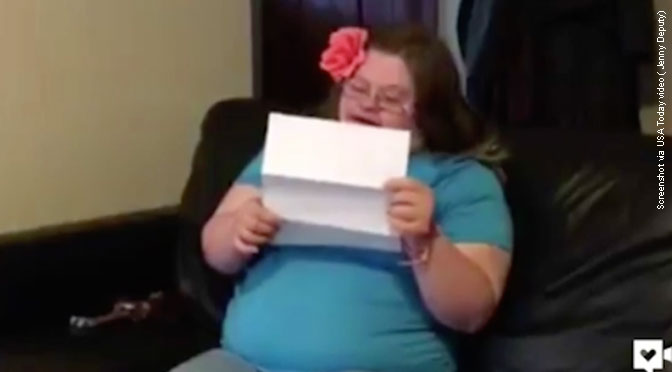 While debate rages about aborting those diagnosed with Down syndrome in utero, those who are living with it continue to inspire in all sorts of ways.

Just like many other students, Mickey Deputy has been accepted to start her college career in the fall. Mickey, whose excited reaction  was captured in a video shared by “HumanKind” for USA Today, has Down syndrome. Mickey read her acceptance letter aloud while her mother, Jenny, and father and brother, Michael and Brad, watched. She paused after reading “we want to congratulate you on your,” and after prompting from her mother, excitedly finished with “acceptance into our program.”

That program is the INSPIRE program at Franklin College, which is designed for students with disabilities.

Mickey shared with USA Today that she is “most excited to get to experience the college life because I never thought I would ever be able to.” She’s also excited about “making college friends.”

Mickey’s good news is similar to that received by Rachel Grace in March, who also has Down syndrome and was accepted into the CILLS program at East Stroudsburg University in Pennsylvania.

Mickey has career plans to become a dance teacher for children with special needs. And she has inspired in other ways, as an Indianapolis pageant star, with IndyStar following her campaign to become the first Miss America with Down syndrome. While she didn’t win, Governor Mike Pence awarded her the Sagamore of the Wabash, a high civilian honor in Indiana.

Governor Pence has stood by those with Down syndrome in other ways as well, by signing a bill into law in March, prohibit abortion based on fetal abnormalities. But not all were happy that Pence made Indiana the second state to outlaw abortion based on fetal disability. Mere weeks later, Planned Parenthood and the ACLU sued Indiana over the law. Abortion advocates also turned to the absurd and vulgar to show their pleasure, through a “Periods for Pence” campaign. The mainstream media decried the new law as well, disregarding the lives of babies who would be saved from death by abortion.

Fortunately, we have the privilege of witnessing persons with Down syndrome, like Mickey and Rachel, who are inspiring those around them by defying the limits that some in society would set for them.