The sign says Hillcrest Women’s Medical Center, but a recent Pennsylvania inspection of the Harrisburg facility shows it’s no friend to women. Hillcrest is an abortion center, so intent on killing preborn children that it appears to have ignored all normal safety protocols for the women who enter there. The Department of Health inspection from February of this year reveals myriad violations, including old and unsanitary medical equipment, patient safety violations, failure to comply with Child Protective Services laws and mandatory abuse reporting, and endangering patients lives.

The list of violations fills over 40 pages, a disturbingly long list for a facility focused on one goal–to commit abortions. And yet, it seems if a safety measure could be violated, it was. From being unable to document that a board certified OB/GYN was working at the facility to failing “to document the the name, dose and route of administration of local anesthetic used for abortion procedures,” Hillcrest appears to be a woman’s worst nightmare. Some of the problems found are alarming.

A facility is supposed to have a state licensed registered nurse employed as the director of nursing who can assess the needs of patients and staff. What the inspection found:

[T]here was no Registered Nurse employed at the facility to assess patient care needs and develop policies. The facility has not employed an RN since January 27, 2017. Since that time, the facility has done 55 procedures and has not had an RN to assist the doctor and to assess the condition of the patient before and following the procedure.

Under the violation the facility lists its plan to rectify the problem. Hillcrest responded:

A RN has been hired and she will maintain the care and needs of each client/patient and she will assist in the creation and development of standards and policies as it relates to the Ambulatory and Surgical Facility Guidelines.

This RN started April 26, later notes say. It’s unclear how many abortions beyond the 55 took place without the RN or why the facility was allowed to keep operation for the months in which it did not have an RN.

Without a nursing director, perhaps it was easier to let such basics as checking drugs and supplies fall through the cracks. The report notes that supplies and drugs that were outdated were not discarded.

What inspectors found was disturbing. The long list of violations here includes two notable problems, as well as many others:

In the recovery area, seven individually wrapped 22 gauge three and one-half inch needle and syringes were in paper wraps that were physically deteriorated and yellow with age.

In the procedure room, 20 Chlamydia/Gonorrhea swabs that expired in 2004. 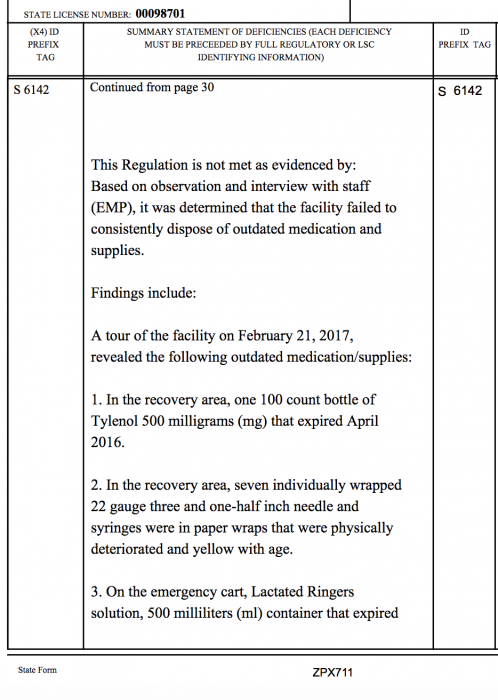 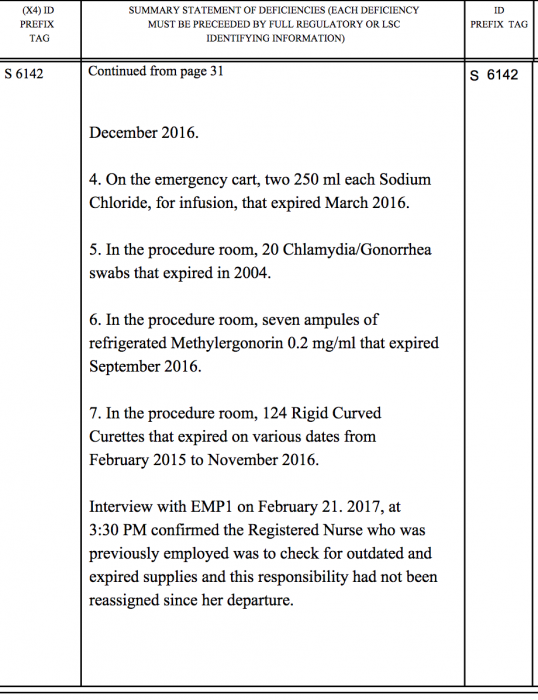 Likewise, the facility was cited for failing to secure drug samples, that they were “stored in a manner that was accessible by unauthorized staff and the patients.”

But Hillcrest has a plan of correction for that, saying it has now discarded all the expired drugs and supplies and locked the medical supplies away. The new RN will be checking, Hillcrest says, to ensure this stays the same.

There’s no comment in there about what happened during the 13 years that the expired Chlamydia/Gonorrhea swabs were left. Surely there were some RNs working there over those years competent enough to check for decade-old swabs. After all, the swabs are used for rather invasive testing on women’s bodies — this isn’t hand soap in the restroom.

And direct patient treatment — like post-abortion care — didn’t fare too well in this inspection, either. The state code says patients must be supervised “constantly” as they recover from abortions or anesthesia, until a nurse evaluates their condition and they are released by a professional. But what the inspection found was this:

[I]t was determined that the facility failed to provide evidence that a registered nurse was in attendance during the hours patients were present for 12 of 12 medical records reviewed.

Patient safety is clearly an issue at Hillcrest, as the report notes:

Based on a review of facility policy and staff interview, it was determined the facility failed to ensure that Patient Safety Committee meetings were conducted quarterly.

Upon this report, Hillcrest issued a plan of correction saying it would meet the first week of each quarter to be sure the patient safety plan was being carried out. Why it took an official investigation to ensure that patient safety plans were followed remains a mystery.

Minors aren’t safe at Hillcrest either. The facility was also found to be in violation of the Child Protective Services Law (CPSL). The CPSL “requires that employees hired after July 1, 2008, who have a ‘significant likelihood of regular contact with children in the form of care, guidance, supervision or training must obtain three background checks as condition of employment: Pennsylvania State Police Clearance, Department of Public Welfare (DPW) Childline Clearance and Federal (FBI) Criminal Background Check.'” But what inspectors found was:

Based on review of medical records (MR), personnel files (PF) and staff interview (EMP), it was determined that the facility failed to follow their policy and ensure that all staff hired after July 1, 2008, obtained the required background checks as required by Act 179 of 2006 an Act of 2007 (Child Protective Services Law), for eight employees…. A review of MR6, a 17 year old patient born in September 1999 revealed she had a procedure on February 10, 2017. An interview on February 21, 2017 at 10:00 AM with EMP1 confirmed that background checks were not completed for the employees. Further interview confirmed that the facility admitted and treated individuals under the age of 18.

The facility also was cited for not being in compliance with the Adult Protective Services Act of 2010 of reporting suspected abuse of adults 18-59. This is an act that would protect trafficked or abused women who are brought in for abortions by their rapist, pimp–or even an abusive spouse.

Hillcrest, like other Pennsylvania facilities, avoided state inspections for 15 years until Kermit Gosnell’s “House of Horrors” late-term abortion center was discovered in 2011, at which time “Pennsylvania health regulators ordered 14 of the state’s 22 freestanding clinics to remedy problems,” NBC news reported at the time. Among those violations was Hillcrest:

In a September visit to the Hillcrest Women’s Medical Center in Harrisburg, equipment was found well past expiration date. Also found was an unlabeled bag of blue pills and practices that raised patient confidentiality concerns.

“It was noted that names of patients that were having procedures that day were displayed on the wall in the hallway where they could be observed by other patients,” the agency wrote.

Six years have passed since that report, and it seems not much has changed.

Even now, protestors stand peacefully outside Hillcrest, trying to prevent senseless death, not only of preborn babies, but of the women whose lives are clearly endangered by the egregious safety violations of the facility. The abortionist at Hillcrest is reportedly Delhi Thweatt, infamous for being sued for killing a patient in 1996 because he administered lidocaine to her, despite her disclosing she was allergic to all drugs in the “caine” family. Thweatt’s trail of terror continued, as documented by Abortion Docs, but he’s continued to commit abortions at Hillcrest. 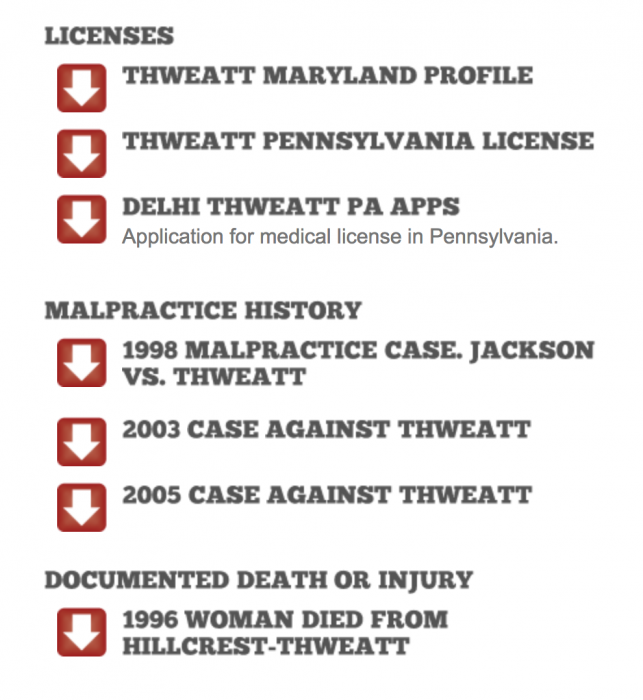 Just last year, an ambulance was called to Hillcrest because of a patient’s vaginal hemorrhage. Thweatt was the reported abortionist that day.

The list of violations obviously isn’t new revelation to Pennsylvania inspectors, or anyone familiar with the facility’s history. Gosnell’s House of Horrors should have been a wake-up call for Pennsylvania, and yet the careless “medical care” continues, endangering lives and mocking medicine.

ABC27.com reports, “Health Department spokesperson April Hutcheson says Hillcrest has until Aug. 31 to complete all corrections. The department will visit the facility again to ensure those corrections have been made. Penalties cannot be assessed until the revisit is complete.”

How many women will enter Hillcrest between now and the end of August? That number is anyone’s guess, but one thing seems clear: Women who enter there may not be any safer than the babies sucked from the womb.