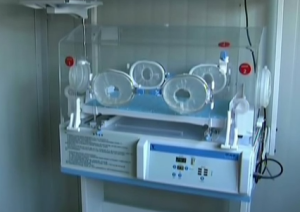 One of the baby hatches that saves hundreds of lives

A baby hatch in southern China has been forced to suspend work after hundreds of infants were abandoned, overwhelming the centre, its director says.

Currently, while there are 1,000 beds at the center, there are 1,121 babies and children living there – in addition to “another 1,274 in the care of foster families.”

This “baby hatch” is one of twenty-five such places, opened since 2011, throughout China. Equipped with “an incubator, a delayed alarm device, an air conditioner and a baby bed,” a baby hatch is a safe place for Chinese parents to leave their infants. Mirror News reports:

Parents place a child in the hatch, press an alarm button and then leave, remaining anonymous.

Someone then comes to retrieve the baby five to 10 minutes later.

Thanks to China’s One-Child Policy, many parents prefer to have a healthy son. Baby girls and disabled infants are often abandoned – sometimes left to die or be found in fields or streets, and, increasingly, left in these baby hatches. The Chinese bureau overseeing this particular baby hatch states that “[a]ll the abandoned infants had illnesses, such as cerebral palsy, Down’s syndrome and congenital heart disease.” Some parents reportedly fear they will not have enough money to care for a baby with disabilities.

China’s baby hatches seem to be a good way to care for abandoned infants. There appears to be more safety – and a chance at life – compared to being left alone on the street, in a trash heap, or in a field. However, an even larger problem is the One-Child Policy and the problems and culture it has created.

Thanks to the One-Child Policy, 400 million people are missing from China. And the One-Child Policy has created discrimination against girls and babies born with disabilities. Instead of valuing every child for her unique gifts and potential, “perfect” children are desired and “imperfect” ones are abandoned.

[C]ritics have assailed the policy for both the human-rights abuses it gave rise to — forced abortions and sterilizations, to name just two — as well as its social costs, which are now multiplying. China today faces a dramatic increase in its elderly population, along with too few young people to take care of all these retirees. The nation must also contend with an alarming gender imbalance because some parents have terminated pregnancies of female fetuses in order to ensure a favored boy as their sole child.

And indeed, while the baby hatches are an admirable effort on the part of Chinese officials to rescue abandoned babies, the nation ought to stop its forced abortions and sterilizations that ingrain in its people that only the “approved” may live.

As one mother, whose baby was forcibly aborted at six months, told Sky News:

[I]n some provinces, over-zealous local officials, keen to keep within their birth quotas, break the law and terminate pregnancies by force.

“They don’t have any humanity. They are not humans.” Liu Xinwen said.

“They must have children and parents too. But they don’t have any conscience. This is how China is.”

Perhaps China will see the great destruction caused by the One-Child Policy and continue to change it. Perhaps additional baby hatches will be opened throughout the nation. And perhaps, one day, girls, babies with disabilities, and other “imperfect” people will be welcomed. We can do our part by partnering with organizations like All Girls Allowed and by speaking out for the right of every single baby to be rescued and loved.