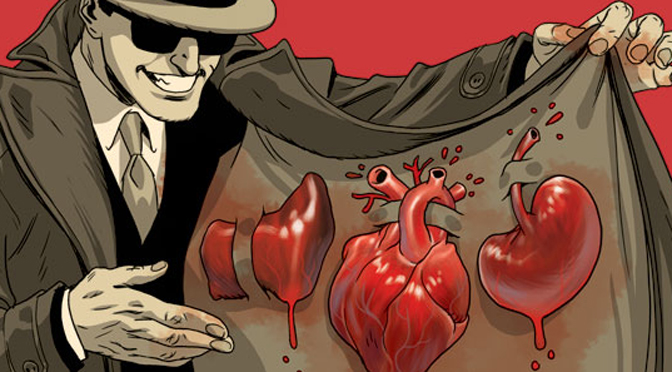 A recent Facebook post celebrating organ donation as saving lives suggests the general public may be confused about what is disclosed in the Center for Medical Progress (CMP) videos.

Doctors are presumed to operate under strict professional and ethical standards, and the American public is reassured by Eric Ferraro, Vice President of Communications for Planned Parenthood Federation of America, who likens PP’s practice of harvesting fetal organs to standard organ donation procedures done “with full, appropriate consent from patients and under the highest ethical and legal standards.”

History, however,  teaches otherwise – doctors were capable of paying grave robbers to steal corpses when it was expedient.  Thus, during the 19th century body snatchers routinely supplied doctors with fresh cadavers for medical training despite strong legal and moral prohibitions.

As it turns out, the market in body parts is quite lucrative, especially when each part is sold separately. The Planned Parenthood staff refer to  “per specimen” charges, and “line items” in video 4.  Scrubbed after the CMP videos were released, the StemExpress website entices organ trafficking  with the promise of “financial profit,” “financial benefit” and “fiscal growth” – all terms associated with profit.  The 8th CMP video details how Advanced Bioscience Resources (ABR), a competitor to Stem Express, places its own fetal procurement technicians in the lab area of the clinic in order to obtain fetal organs as quickly as possible after an abortion.

Since the body parts are processed and shipped by the middleman, Planned Parenthood does not incur any costs. StemExpress CEO Cate Dyer alludes to a practice of staffing an ABR employee or consultant at the abortion clinic. She also refers to a Hawaiian get-away funded by the profits derived from procurement. In fact, the abortion provider profits twice, as Students for Life explained in a recent video. While the pregnant women pays up front for the fees associated with the abortion, including consultation, administrative costs, the surgery itself and disposal of the fetal corpse, body parts vendors pay for the same services (“transport” displaces “disposal”). How can a second charge for the same service be regarded as anything but excess profit?

Holly O’Donnell, the former Stem Express technician interviewed in the videos, establishes that consent often is disregarded, despite the fact that it is required by law. “If there was a higher gestation, and the technicians needed it, there were times when they would just take what they wanted. And these mothers don’t know. And there’s no way they would know.” Filling demand is the job of the procurement technician – who typically obtains consent,  dissects, packages and ships fetal organs.

Thus, even administrative costs to Planned Parenthood are minimal.  Cecile Richards maintains they recoup only the cost of harvesting, storage, and preservation of fetal organs.  Her immediate press statements in response to the CMP videos maintain “zero profit” on “tissue remains.” By contrast,  in her August 27th letter to Congress, Richards admitted the California affiliate charged the procurement agency $60.00 per specimen. The sale of human fetal tissue is a federal felony punishable by up to 10 years in prison or a fine of up to $500,000 (42 U.S.C. 289g-2).* During a Senate hearing on July 29, former Planned Parenthood Clinic Director Abby Johnson estimated the per specimen approach amounts to a profit of about $120,000 per month – generating much more revenue than would be expected from simply recouping costs.  In a now famous anticipation of such profiteering,  President of the Planned Parenthood Medical Directors Council,  Dr. Mary Gatter states: “I want a Lamborghini.” (Video 3)

Organ donation to increase scientific progress  is invoked in defense of Planned Parenthood’s practice of harvesting and then selling human fetal organs at a profit.

Investigation is required precisely because the issue of donation is in question, especially in light of  Planned Parenthood’s tax exempt, nonprofit status, yet clear political advocacy role.  A 501(c)(4) can’t have as their primary purpose the endorsement of candidates, yet Planned Parenthood is known for routinely promoting pro-abortion candidates on social media as well as disparaging pro-life legislation and candidates. The tax-exempt Planned Parenthood Action is a highly political advocacy group that has funded election campaigns for democratic candidates, and leaders such as Rick Perry have called for their nonprofit status to be removed.

Government grants, contracts, and Medicaid reimbursements add up to 1.4 million per day for Planned Parenthood, and their 2013 annual report indicates $127 million in excess revenue. Profiting from organ trafficking – sometimes through forced consent – is certainly not in the same category as heroic, voluntary organ donation.

Many American citizens are unaware of the CMP videos, not to mention the organ trafficking endorsed at the highest levels of Planned Parenthood. Attaching defunding to a must-pass spending bill may be necessary at this point, with ongoing investigations providing the general public with the facts about what’s at issue – not organ donation, but the ways Planned Parenthood profits from the sale of human organs.

*Whereas unpaid donation of fetal tissue and organs is allowed under strict conditions, profiting from their sale is prohibited by law.   U.S. Code § 289g–2 – states that It is unlawful for any person to knowingly acquire, receive, or otherwise transfer any human fetal tissue for valuable consideration.