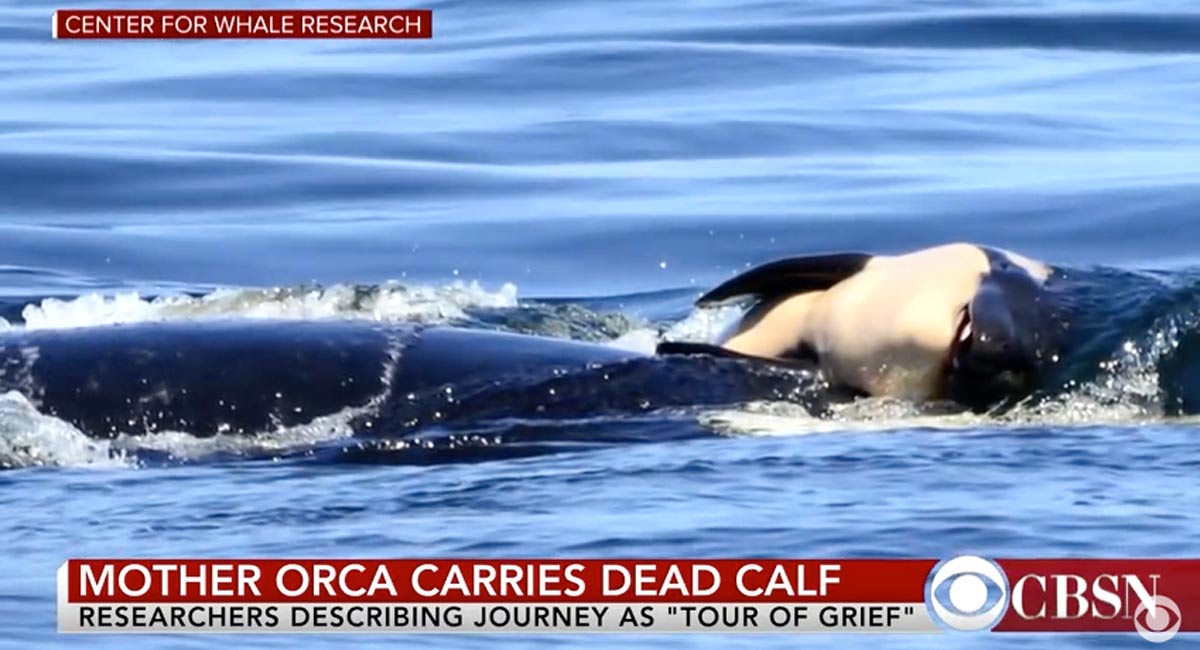 Currently, a grief-stricken orca mother is in the news. The aquatic mammal has spent weeks dragging a dead calf through the ocean off the coast of Washington. Like it or not, it appears nature is sending a visual message, not only to Washington State but the world, about what constitutes maternal instinct and how mothers should feel about the loss of offspring.

On July 25th, an orca named Tahlequah (J35) gave birth to an orange-tinted 400-lb calf that survived a half hour. Since that day, Tahlequah has refused to let go of the calf and has transported her dead offspring through the Pacific Ocean assisted on occasion by other members of her pod.

[t]he pod of killer whales that roam between Vancouver and San Juan Island has dwindled to 75 members over the decades. The cause is no mystery: Humans have netted up the whales’ salmon, driven ships through their hunting lanes and polluted their water, to the point that researchers fear Tahlequah’s generation may be the last of her family.

In response, biologists and government officials are currently working on a plan to save Scarlet (J50), a starving member of Tahlequah’s pod. In an attempt to rescue the whale, the critically ill 3-1/2-year-old is being tracked and fed antibiotic-laced salmon. Meanwhile, in America, there is another group at risk. According to an Abortion Surveillance Report issued by the CDC, in 2011, “black women [made] up 14% of the childbearing population, yet obtained 36.2% of reported abortions.” At the time, “Black women [had] the highest abortion ratio in the country, with 474 abortions per 1,000 live births.”

In other words, environmentalists and animal rights activists address diminishing pods and malnourished killer whales but seem unconcerned about the disproportionate number of Black children denied the right to live in humanity’s pod.

According to Chiu, as America aborts its unborn, this orca mother was “forever picking up the [calf’s] body as it sank, hoisting it out of the water to take a breath, and repeating.”

Deborah Giles, a University of Washington killer whale biologist, said that based on the whale’s unusual behavior, “You cannot interpret it any other way. This is an animal that is grieving for its dead baby, and she doesn’t want to let it go. She’s not ready.”

Thus, according to TIME Magazine, Tahlequah has not been forced to release the corpse of the dead calf because scientists deem that “her emotional bond is simply too strong.” In turn, researchers have discontinued calling the whale’s treatment of her dead baby “rare” and are now calling it “unprecedented.”

It’s indeed telling to witness an inconsolable whale grieve for what human beings fight for the right to throw away.

Nevertheless, Giles told TIME Magazine that “Even if her family is foraging for and sharing fish with her, [she] cannot be getting the… nutrition she needs to regain any body-mass loss that would have naturally occurred during the gestation of her fetus.”

And while large numbers of unborn humans are destroyed, primarily for convenience’s sake, it’s interesting to note that Tahlequah’s pod is dwindling and finding it difficult to forage for food, with many orcas starving — and yet, each life matters to the pod. Although “the effort of pushing her calf – for about 1,000 miles by now – is probably making her weak and keeping her from finding enough food,” Tahlequah puts her life at risk for the sake of her child.

In fact, when reflecting upon Tahlequah’s plight, one can’t help but wonder whether supporters of the right to abort can see the cognitive dissonance in assigning an animal “a sense of interspecies kinship…[with]… mothers who … also lost children.” Many are grieving right along with this orca, with one scientist reportedly weeping over the whale, with people writing poems and drawing pictures of Tahlequah, or any of those who “lost sleep” lamenting over the heartsick orca. Yet they will dismiss the idea of human post-abortion grief.

Killer whale expert Peter Ross, vice president of research at conservation group Ocean Wise, said, “One of the reasons the story is rather heart-wrenching is the fact that we’ve grown to truly marvel at this iconic species and… we see a little bit of us in them. We look for things that we might understand or explain on the basis of our own experiences.”

With that in mind, as the whale funeral procession continues, pro-choice individuals who justify animal rights above human rights — and do so by assigning human virtues to animals — really should ask themselves how Tahlequah’s conduct toward her dead offspring reflects on the treatment 60 million human beings have suffered at the hands of their mothers.

The orca’s actions provoke a powerful image that should incite heartfelt response in both science and government and send a strong message to those who support the unfettered slaughter of the 51,000 babies who were aborted in the U.S. in the 17 days since Tahlequah’s calf died. Moreover, if it is true that whales are highly intelligent and exhibit similar emotions to humans, this ora mother’s behavior conveys a lot about those who march for the right to abort what a killer whale cherishes.