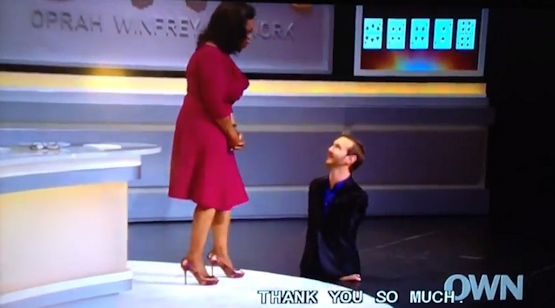 We are all fearfully and wonderfully made. 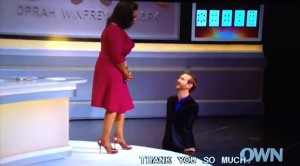 On a recent episode of “Oprah’s Lifeclass,” the celebrity host interviewed well-known Pastor Rick Warren. Warren agreed to speak with Oprah under the condition that he could bring one guest with him. The guest was inspirational speaker Nick Vujicic.

The video clip from the show was published on YouTube on Jan. 14, 2013 and already has well over a million views. Nick’s story is a remarkable reminder that every life is valuable.

It’s easy to get discouraged living in a world where lives are aborted for the sake of convenience, children are rejected because of disabilities, and doctors euthanize patients with imperfect conditions. Stories like Nick’s uplift us and bring hope. They reveal the worth of the individual and unique beauty of human life. Nick’s story will cause you to be grateful for your own. Watch the video and be inspired by his amazing courage.

Born in 1994 in Melbourne, Australia to Pastor Boris Vujicic and wife, Dushka, Nick brought shock and confusion to his parents. Without any sign beforehand or medical explanation afterwards, Nick was mysteriously born without arms or legs. In an instant, the Vujicics went from expectations of a healthy baby to the reality of caring for a severely impaired child.

Growing up, Nick wrestled with feelings of loneliness and depression. He also endured school bullying and teasing. Nick wondered why he was different from the kids around him. At age 10, he confessed to wanting to take his life. He was without hope and struggling to find a purpose for his existence. He feared he would always be a burden to his parents. He wondered how it would be possible for him to ever have a job and financially support himself. In a time of emotional darkness, Nick believed he was better off dead than alive.

Thankfully, Nick’s supportive parents were always by his side. Their love and encouragement enabled him to keep fighting and not give up hope. Nick’s faith in God helped him to see his life as valuable and worthwhile. Nick began to believe that even with his disabilities, a life of joy and adventure awaited him.

After graduating high school, Nick obtained a double Bachelor’s degree in accounting and financial planning from Griffith University in Logan, Australia. Gaining a degree is an accomplishment for any person, yet it was just the beginning for Nick. At the young age of 19, Nick began sharing the love of God and his personal testimony as a motivational speaker.

In 2007, Nick moved to California and became president and CEO of the non-profit organization “Life without Limbs.” Their mission statement is to cross boundaries and break down barriers, to build bridges that bring people to the love and hope found in Jesus Christ. Nick has traveled to over 43 countries and has been privileged to speak to millions of people. His core message is focused on a verse found in the Bible, in Psalm 139. Nick writes:

In Psalm 139:13-14, the Bible says, “For you created my inmost being; you knit me together in my mother’s womb. I praise you because I am fearfully and wonderfully made; your works are wonderful, I know that full well.”  Because of the ministry of Life Without Limbs, God has used me in countless schools, churches, prisons, orphanages, hospitals, stadiums and in face-to-face encounters with individuals, telling them how very precious they are to God. It is our greatest pleasure to assure people that God does have a plan for each and every life that is meaningful and purposeful, for God took my life, one that others might disregard as not having any significance and He has filled me with His purpose and showed me His plans to use me to move hearts and lives toward Him.

I’m glad the doctors never picked up on Nick’s disability while in his mother’s womb. If they had, they may have encouraged his parents not to bring him into the world. Many parents view abortion as a means to free sick or disabled children from future suffering. Nick has shared that even if he were offered a chance to get his arms and legs back, he wouldn’t take the offer. His disability has been a gift that’s allowed him to touch the lives of countless others.

Nick is now happily married and awaiting his first son. His wildest dreams are coming true. You may not have a story like Nick’s, but your life is precious, too. Believe that you are fearfully and wonderfully made, and don’t be afraid to dream big!