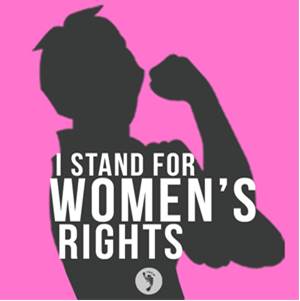 Online for Life, a pro-life organization that maximizes internet search capabilities to lead abortion-minded men and women to life-affirming alternatives, announced Monday that it will be celebrating Women’s Rights Week from September 29 through October 5. The celebration is a social media undertaking. Supporters are invited to tweet using the hashtag #WomensRights and change their profile pictures on social media sites like Facebook and Twitter to the image featured here:

Organizers at Online for Life described the event on Facebook, saying the following:

This week, we will share that we are not only pro-life, we are also pro-woman. And in a society that so narrowly ties child birth solely to women’s rights, it’s important that together we share that abortion affects more than just the child’s mother — while respectfully acknowledging that the mother, and every woman in society is impacted by abortion, whether they realize it or not.

We hope to leave this week with all women feeling empowered, and making it known that OFL stands strongly WITH women, before and after birth, in the fight for LIFE.

Online for Life seeks to “reframe” the American discussion on abortion by drawing attention to the real solutions to women’s rights issues. Abortion has been proven time and again to be a boon to disloyal and misogynistic men, and yet abortion is touted by abortion-backers as a benefit to women. Says Amy Gerwing of Online for Life:

For too long society has asserted that abortion is an essential tenet to women’s rights.  But nothing could be farther from the truth. Abortion hurts women – both physically and psychologically – while ending the life of millions of unborn women every year.  If we are going to advocate for women’s rights, then it must begin by helping the women who face crisis pregnancies.

Our experience has shown that most women considering abortion don’t fully understand the facts about abortion or the ramifications of their decision. The point of this week is to leave women feeling empowered. There is power in knowing all of their options. Our culture has been conditioned to think of abortion as empowering women, as a woman’s right, when nothing could be further from the truth. Abortion is the ultimate ‘get out of jail free’ card for sexually aggressive men. It’s another chapter in a long history of men using or oppressing women.