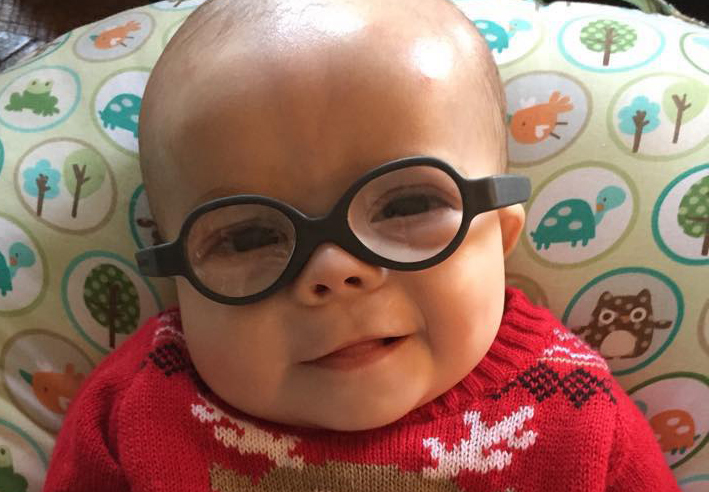 Jude Peters is an adorable one-year-old boy living with a disease called rhizomelic chondrodysplasia punctata (RCDP), a rare and fatal form of dwarfism.

Parents Hannah and Sully Peters refused to abort Jude even when doctors pressured them to “terminate and try again.” In an interview with FOX News, Jude’s mother said doctors expected that he would only live a few weeks.

“They told me that he might not be compatible with life outside of the womb,” Hannah Peters said. “Then when he was born, they sent him home on hospice and said he wouldn’t make it a few weeks.” Baby Jude was diagnosed with dwarfism. His parents are continuing to chronicle his amazing journey.

Jude’s parents Hannah and Sullivan have done an amazing job of sharing the story of their precious son with the world. Their Facebook page, Praying for Jude Sullivan Peters, has close to 29,000 likes, and Hannah’s Instagram has over 19,000 followers. People across the globe have fallen in love with brave little Jude Peters.

Recently Jude received a beautiful cape from Tiny Superheroes, a company that makes superhero capes for children battling illnesses. The children who received the capes are suffering from serious conditions, such as cancer, autism, epilepsy, and heart defects. The tiny cape bearing the child’s first initial is a symbol of their courage and strength. When Jude received his cape, his father asked their Facebook friends to share a super power they believe Jude has. Amber Tessnear Chapman was one of many who said, “Jude’s superpower is being able to make anyone smile.” Robyn Walshaw said, “Jude has many super powers, some we probably don’t even know about! The biggest is all the love he attracts! We can’t help but love this tiny man even if we don’t know him. “

Arleth Torres Santacruz believes, “Jude’s super powers include: being super cute, being a fighter, being a warrior and somehow finding his way into everyone’s heart!” Hannah recently shared on social media that she knew Jude was going to impact the world before he was born. She said:

I was told Jude would speak to the nations before he was born. I didn’t know exactly what that would look like until now. I didn’t realize the impact my child could have on people all over the world.

His story hasn’t just brought hope, faith and joy to my life, but to people all over who have never even had the chance to meet him face to face. The countless testimonies we receive from strangers telling us how Jude’s story has brought healing and hope has been such a wonderful blessing to us.

Since the beginning of our journey with Jude, it has been my prayer that The Lord would receive glory, people would be filled with hope and faith in him and that maybe even amongst our greatest battles, our story could speak life, healing, hope and truth. I am blessed and honored that this precious gift has been placed in my hands.  Jude’s story is a constant inspiration to us all! May his life be a reminder that a single child’s bravery – and the bravery of his mom and dad – has the potential to touch hearts around the world.