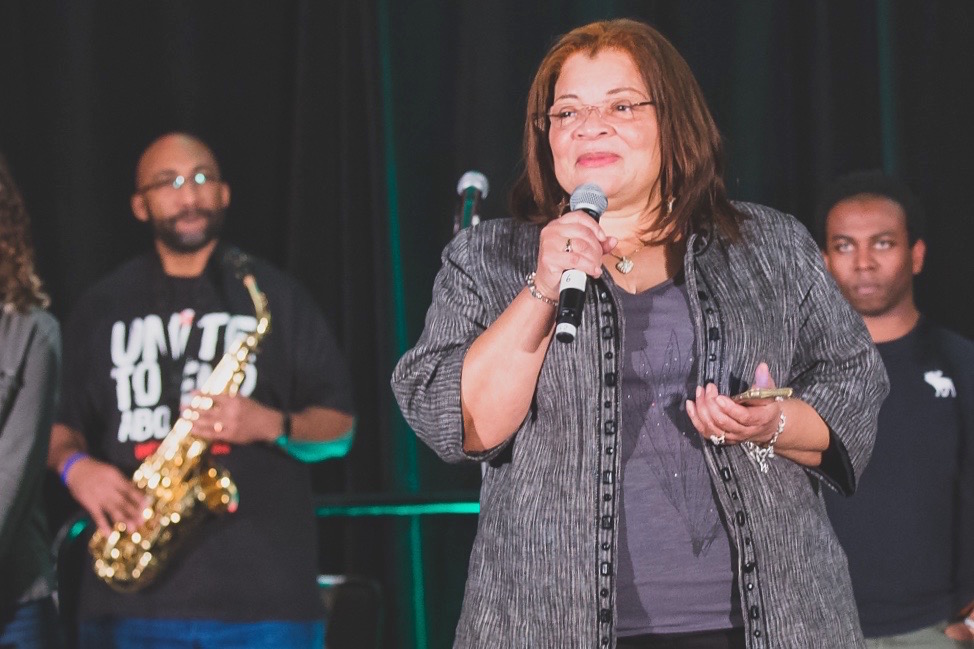 (Via Bound4Life) One year ago, a remnant of believers came together in Washington, D.C., for OneVoiceDC—a non-denominational prayer and worship gathering. This evangelical event works in tandem with the annual March for Life, where hundreds of thousands of people stand against the greatest human rights injustice of our day: abortion.

While the march has always been driven by diversity, OneVoiceDC gives space for a different, yet unified, expression of worship. Last January at OneVoiceDC, we shouted in praise; we waited in silence; we cried out in intercession.

The fight to defend life is, after all, as much a cultural and spiritual struggle as it is about laws or public policy.

Voices such as Dr. Alveda King, David Bereit of 40 Days for Life, Abby Johnson, Bishop Harry Jackson, Star Parker and Matt Lockett of Bound4LIFE International led us in pouring out our hearts for the innocent. We had no idea what possibilities God had in store for this nation in 2015… but it sure felt big.

Suddenly, in ways we’ve never seen before, the church has been speaking up this past year. Thanks in part to a series of videos exposing the abortion industry, pastors and local ministry leaders are openly expressing their Biblically based beliefs about the intrinsic worth of every human life. Just as important, compassion leads the way in our responses. By going first to the place of prayer, we’re seeking to see people as God does, feel His heartbeat and act as He calls us to. One family that’s adopted six kids recently opened an adoption agency less than a mile from the local Planned Parenthood center.

Coming from an adoptive family myself (Ryan), and having the joy of adopting several of our children, we get so excited about the possibilities that a growing adoption movement provides.

It’s in a spirit of love and justice that pro-life faith leaders are uniting again at OneVoiceDC on Thursday night, January 21—preceding the March for Life with prayer and worship together. Many local churches are already planning to attend this free event (seating is limited so registration is required).

As Christians, we should understand that anything is possible—even the abolition of the injustice of abortion—for a God who says: The impossible is nothing to me! As His hands, His feet, His heart, His voice, is there anything that cannot be done? Scriptures do not say we are under comers—rather, the Bible says: “We overcome by the blood of the Lamb and by the word of our testimony” (Revelation 12:11).

Our stories of personal triumph, of overcoming, empower others to do more than they thought they could do. Most of our lives are unplanned, and we should take it on with hopeful expectation. Abortion teaches society to look at the unplanned with nothing but defeat.

Some feel like this struggle is insurmountable. But we’re stronger than our circumstances. We’re stronger because this cannot be done in the physical. It is a spiritual battle that requires all of us to engage—peacefully, lovingly, unceasingly.

The past year has opened up a cultural conversation about abortion at a level we have not seen for decades. Recent surveys show the issue of life is becoming even more important in the wider culture, while 64 percent of evangelicals are watching candidates’ views on life closely.

We believe that our prayers play a part in this vital movement to affirm every life, without regard to age, race, ethnicity, beliefs or any other differences. As abortion survivor Gianna Jessen testified boldly before Congress: “It is often from the weakest among us that we learn wisdom—something sorely lacking in our nation today.”

Where will this cultural conversation lead? Our prayer is that it leads to the truth. Our hope is that it leads to an awakening like we’ve never seen before—especially in the church, where God’s people speak up for those who cannot speak for themselves.

Our passion is to unite believers with one voice that will not relent… until abortion is abolished in our nation that claims “liberty and justice for all.”

Ryan and Bethany Bomberger are founders of The Radiance Foundation, a nonprofit educational life-affirming organization. They are adoptive parents with four awesome children. The Radiance Foundation and Bound4LIFE serve as lead sponsors of OneVoiceDC – a prayer gathering on Thursday evening, January 21 to launch March for Life 2016. Register online to attend.