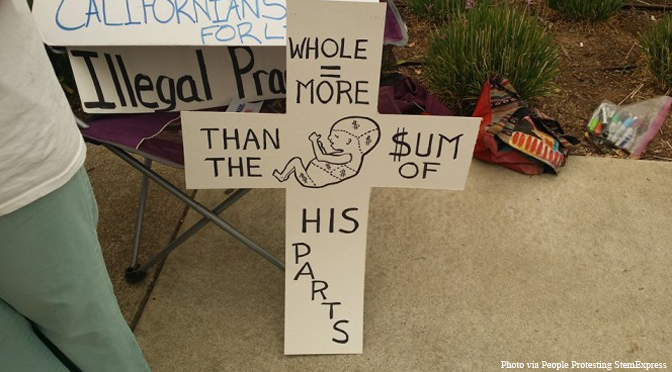 It was ten after twelve. I was late again. A new man stood on the sidewalk alone, holding a sign I couldn’t quite read from where I parked. As I crossed the road I noticed it read, “I support StemExpress.”

So this must be Jim.*

Susan told me last Friday that a man had approached the picketers on Wednesday and said he was going to organize a counter protest. The protesters were civil – cordial, even. They told him he was welcome on the sidewalk any time. This is what freedom is all about. Susan told me he seemed surprised  by the welcome, even as both sides expressed their view that the other was wrong.

Jim had science and research on his side, he said, and he was out to set the record straight.

So, as I crossed the street, I walked right up to him with my protest signs tucked under one arm while extending the other towards him. We shook hands as I said, “You must be Jim; welcome to the sidewalk. Susan told me you’d be coming. I’m Marcia.”

As I took my place on the other side of the StemExpress driveway, I selected two signs. One read, “Selling Body Parts is Illegal,” and the other, “A person’s a person no matter how small. By Dr. Seuss.”

While the StemExpress security guard watched from the sidelines, Jim and I exchanged polite conversation. “How long have you lived here?” Jim had me beat. My family’s only lived here since the late 80’s. He and his wife had been here since the mid-70’s.

“So Jim, what brings you to the sidewalk?”

“I’m here because the Colorado shooter was incited by the language you use,” he said.

I started a comeback, but he shut me down flat, saying, “I don’t want to debate this.”

“Okay,” I said, quickly regretting that the first words out of my mouth weren’t something like, What happened in Colorado was a terrible tragedy. I’m against violence in all its forms. But the moment was lost.

For a space of about five minutes, we said nothing. I prayed silently, interspersed with calls of  “thank you” to the passersby who showed support for my protest with a honk or a wave. Then I looked at Jim and said, “We should keep score.”

With a smile he said, “I already have been. I’ve got ten, you’ve got six.” I was tempted to lobby a protest right then. There was no way he had ten supporters. He must have been counting before I arrived. But instead, I said, ‘You’re on.”

The next moment, a man drove by, and honked and waved at… me. “Thank you!” my voice rang out to the driver. I said to Jim, “That’s seven.” We both smiled.

Minutes later, a fellow stopped in the middle of the road, having read both sides’ signs. He looked at me and said, “What’s this all about?”

“So they don’t do abortions?”

“No,” I said, “But they are making millions on selling baby body parts.”

“She’s exaggerating,” was all Jim had time to say before the man drove off – but not without first thanking me for being there.

At this point the score was nine to eleven. Jim was still ahead.

Another man drove back by twice just to clarify whose side he was on. He looked at me and said, “You should pack it in.” He was supporting Jim.

But it wasn’t long before Jim and I were neck in neck at twelve supporters a piece. Then a couple walking down the sidewalk on the other side of the street stopped, read my signs and called out, “Can I take your picture? I want to post it on my Facebook page. What you’re doing is just great.” With that vote of support, I pulled ahead and looked back only once.

When a woman drove by and flipped me off, I said to Jim, “That one’s for you.” He was reluctant to take it, but I said, “People express themselves in all sorts of ways. That was clearly a vote for your side.”

Though accepting his point, Jim was clearly a nice man. At a big gust of wind, my unused signs were blown across the sidewalk and into the street – and he tried to help me collect them.

“Oh, you will, indeed,” he said as he walked away and disappeared around a bend in the sidewalk.

The security guard, who had been observing all of this, then asked me, “So, who won the contest?”

“Well, even though he gave himself an unfair advantage by starting at ten and giving me six, the final score was twenty to thirteen. My win.”

The broadest smile spread across the guard’s face. Then, as if to catch himself, he quickly said, “I’m just glad everything was amiable.”

A few minutes later I was carrying my signs across the street to my car, thanking Jesus and acknowledging that the “win” wasn’t mine. That was a win for the voiceless whose bodies are bought and sold for profit and desecrated in the name of science.

But Placerville, California, knows – or at least the majority of people who passed down Pacific Street this day know – that despite Jim’s show of support for StemExpress, the question of what should be done with the bodies of babies killed by abortion is not morally neutral. And despite all of the pro-abortion rhetoric since the shooting in Colorado Springs, what’s been happening at that abortion facility, day in and day out, both before and after a madman let loose his gun on the innocent, is a violent tragedy too.

All human life – large and small, born and preborn – is worth standing on the sidewalk for, whether we win or lose.

* Names have been changed to protect the privacy of the individuals.