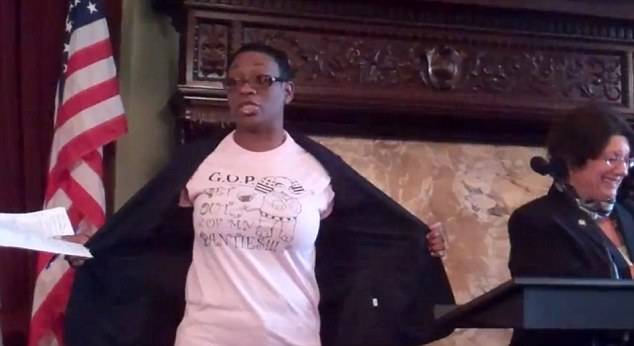 The woman could stand to act her age.

Back in March, Ohio state senator Nina Turner made news because she proposed a bill to limit men’s access to Viagra. Turner claimed she wanted to show “men as much love in the reproductive health arena as they have shown us over the years.” So it seems, then, that her bill then was in reaction to the proposal or passage of pro-life legislation. Well, what a way to counteract the opposition.

If anyone had any doubts about what political affiliation Nina Turner is, he or she can look to what she wore as a hint. At the press conference, Turner showed off the pink t-shirt she was wearing, which read, “G.O.P: Get Out of My Panties!!!” LifeSiteNews reports on the press conference with a few statements from Turner in response to the proposal:

Turner reacted angrily to the proposal, telling those assembled at the press conference, “If they continue their pursuit to condemn women, we will not stand for it.”

Turner accused the Republicans of being “arrogant” and “inebriated with power.”

It boggles my mind that Nina Turner is telling the GOP to get a grip. Meanwhile, she’s the one parading around a t-shirt mocking the opposition party while fighting against a proposal which is not actually such an attack on women as she claims it to be. Nina Turner is almost 45 years old. But with the attention that she tries to seek for her political theatrics, she hardly seems to act her age and seems not at all mature enough to hold public office.

Twitchy also covered the press conference by reporting tweets from Nina Turner, NARAL Pro-Choice Ohio, and Planned Parenthood (@PPAOhio and @PPact), as well as tweets from those criticizing and supporting Nina Turner. As is the case with Turner’s statements, the tweets show that such abortion advocates don’t really bother to understand the political party, legislation, or pro-lifers they are criticizing.

One such tweet from NARAL Pro-Choice Ohio quoting Turner read, “”They have no respect for women, they treat us like second class citizens.’ [email protected][.]” Except that the proposal to defund Planned Parenthood in the state of Ohio is not about “treat[ing] [women] like second class citizens.” Rather, the proposal is to prioritize taxpayer dollars toward those who provide more legitimate family planning health services, which does not include those who provide abortions. This means that Planned Parenthood is out. But it also means that through prioritizing the funds differently, more women will more getting more comprehensive health care services, rather than just the small fraction who turn to Planned Parenthood. Such a bill would not be leaving women without health care, then – quite the contrary. If Planned Parenthood truly cares about women, as the organization claims, there should be more of a sense of understanding regarding how this proposal will really affect women.

However, it seems unlikely that Nina Turner and the abortion advocates on her side will take any time to consider this possible motivation when fighting such a proposal to fund Planned Parenthood. This is because they are so stuck in their own pro-abortion mindsets that they can’t begin to understand where the other side may be coming from – that perhaps their opponents also want to help women, but through different means.

Nina Turner completely misses the point. At the same time, she also continues to mock and generalize the other side. One such tweet from her read, “Ladies & men who respect us: GOP disdain for women not cool. The only small government they push is one small enough to fit in our wombs.” Such obvious and unfair generalizations will likely not win her much bipartisan respect or support for her cause. I don’t know about you, but to me such anti-GOP publicity through loud t-shirts and tweets does not seem like a mature way to go about effectively creating public policy.

And this is what NARAL and Planned Parenthood stand by. Doesn’t Cecile Richards’s post-election appeal to the Republican party in hopes of painting Planned Parenthood as some sort of bipartisan organization sound so much more appealing now? I don’t think so, either.