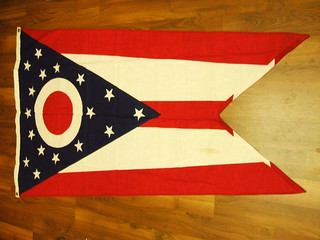 This flag flew above the State Capital building in 1983. Photo credit: Daniel R. Blume on Flickr

Democrats are busy declaring that the “war on women” is alive and well in Ohio. The state’s legislature is considering a bill that would drastically cut funding to Planned Parenthood, although not eliminate it altogether. Basically, the bill would restructure the way that health or family planning centers get federal dollars. According to Aaron Marshall at Cleveland.com, the proposed legislation “reprioritizes federal funding for family planning dollars.”

Nina Turner, a Democrat senator from Cleveland, has resorted to colorful claims in her opposition to the reprioritization:

“Planned Parenthood is necessary for poor, urban and rural areas,” said Turner, referring to the 32 centers run by the organization across the state. “So basically this is saying to hell with poor, black, Latino, urban and rural women.”

In reality, the legislation would not cause Ohio to forget about or ignore needy women. Republican Representative Cliff Rosenberger explains that “the aim is to funnel dollars to ‘local family planning groups that have local knowledge and local access’ that can bring ‘scarce resources to families that really need it.’” In short, not everyone believes that Planned Parenthood is the only answer women have.

It’s not just Planned Parenthood out there offering these services.  Planned Parenthood makes up 32 out of at least 230 or more organizations. Everybody’s in the same mix. They’re all in this hierarchy system, yet they’re not coming forward and raising Cain about this.

I think this is a fair and balanced approach at a time when the dollar continues to be squeezed in government spending, and we want to make sure that we’re providing the best resources to women and family planning out there.

How exactly would the reprioritization work? Aaron Marshall has the answer:

According to the Toledo Blade, “32 Planned Parenthood clinics statewide received a total of $1.7 million” in 2011. No one can be sure how much of the funding would be cut under the proposed legislation, but all parties seem to agree that it would be significant.

A Democrat representative from Toledo, Teresa Fedor, is up in arms about the bill, stating, “These extreme attacks on women are not going to be tolerated in this state.  We’re standing with our sisters to say that government has no business in reproductive health in Ohio.” Unfortunately, Representative Fedor seems to forget that the state does indeed have a say in what happens to federal family planning dollars. If the state of Ohio believes that local health departments can better serve the citizens than Planned Parenthood can, the legislature has every right to send the funds in that direction. The cry of “government intrusion” is more than a little disingenuous, since these funds have always been dedicated to reproductive health and distributed at the state’s discretion. Representative Fedor was plenty happy when that same government was directing the funds to Planned Parenthood. It’s now, when the funds may be reprioritized and given to another more effective organization, that she raises an outcry against the government.

This is just a way for Planned Parenthood to keep a piece of their pie.  They are acting like they are the only entity that provides health care for low income women and that’s simply not true.