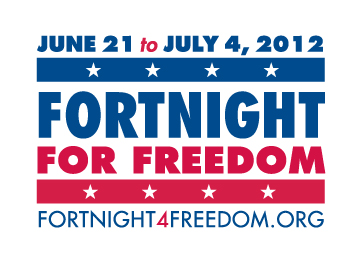 How can you lecture anyone about fake freedoms while denying real freedom to the unborn? 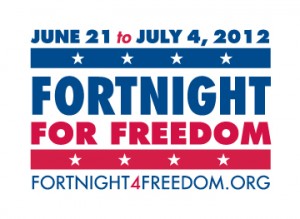 They say that the best defense is a good offense. For those defending the indefensible, it’s also the only defense, as abortion apologists have taken to heart. At RH Reality Check, Catholics for Choice President Jon O’Brien accuses the U.S. Conference of Catholic Bishops of undermining the cause of true religious freedom with its “sham” Fortnight for Freedom:

But religious persecution isn’t only history. If you adhere to the Baha’i faith in Iran today, you live in fear, monitored by a government that has a history of arresting, torturing and killing members of your faith. In Indonesia, the refusal to confess a belief in God will land you, badly beaten, in prison—in 2012. Today’s American Catholic bishops would have us think they are the latest victims of religious persecution. Their claims denigrate the suffering of those who know the true meaning of that term.

Certainly, not all persecution claims are equal. But the bishops never suggested otherwise; in fact, a glance at the USCCB’s religious liberty page shows that the bishops are fully engaged in identifying and condemning religious persecution all around the world, including Nigeria, Egypt, Iraq, and Pakistan. And even if they weren’t, somebody else having it much worse still isn’t an argument against opposing lesser-yet-real infringements against religious liberty. Indeed, vigilance against all persecution, regardless of scale and severity, is the best way to prevent it from growing.

Claiming religious persecution and wrapping yourself in a flag on the Fourth of July in an election year is sure to get you in the paper. It doesn’t make what you’re saying true. Having failed to convince Catholics, clergy and laity, that the use of birth control is a moral offense, the bishops have set their sights on the law that guarantees healthcare to all Americans, and some have also openly criticized the president who signed it. This is what the bishops’ campaign is really about. You can be sure their bogus claims about religious liberty will be fanned by those who share these and other more political and partisan concerns, especially as the election draws nearer. They’ll say it’s about religious freedom, but it’s up to all of us not to fall prey to the tawdry abuse of a principle that is dear to us.

“Sham,” “bogus,” “tawdry abuse”…rhetoric that strong needs an awfully compelling case backing it up. But O’Brien barely even tries to substantiate it, because he’s the one trying to deceive people.

The First Amendment lets Congress make “no law … prohibiting the free exercise” of religion. Private citizens and organizations are free to follow the dictates of their faiths, as long as doing so doesn’t infringe on the rights of anyone else – and if “free exercise of religion” doesn’t at the very least mean you cannot be compelled to participate in practices that violate your religious beliefs, then it means nothing.

The exchange of goods and services, even birth control, is a matter of how people want to spend their own money in private, voluntary interaction. There is no right to be given birth control by someone else, so there is no just ground to make the religious offer it.

When the demands of a powerful religious minority are privileged over the rights of every citizen in a society, the results are never good. We can expect the same if we acquiesce to the bishops’ demands. Hard-working families will not be able to afford contraception; with a shrinking safety net, more children will grow up in poverty. Victims of sex trafficking will not receive unbiased counseling and will endure a forced pregnancy. Lesbian, gay and transgender people will be refused jobs and services; committed couples will be denied the rights and benefits of marriage. Men and women won’t be able to get their prescriptions filled if their employer or pharmacist judges the use or provenance of the medicine immoral. People at risk of contracting or spreading HIV won’t learn that condoms can help save their lives and the lives of people they love. Women who need abortions, even to save their lives, will be turned away. This is not what Americans want, and it’s not what America is about.

It’s telling that instead of offering a coherent, logical explanation of how liberty works, O’Brien falls back on a generic laundry list of pro-abortion talking points (contraception breaks the bank? Guess again.) and misleading oversimplification of unrelated issues like same-sex marriage, all of which is overshadowed by one question: how can Jon O’Brien lecture anyone about fake freedoms while denying real freedom to the unborn?

Maybe when he squares the circle of a “Catholic” organization adopting a cause his own faith condemns as an intrinsic evil, he’ll have some credibility on matters of religion and liberty. Right now, he’s fit to judge neither.