Getting worse and worse.

UPDATE:  Hercules Industries and the Newland family have won a preliminary injunction against the contraceptive mandate.

Hercules Industries, a Colorado-based HVAC manufacturer, is a family-owned business that has been operated for 50 years. Currently, the four Newland siblings – James, Paul, William, and Christine – own the business and employ 265 people. According to CNS News, the Department of Justice is taking action to ensure that this Catholic family complies with the demands of the contraceptive mandate in ObamaCare:

The Justice Department last week presented the Newland family of Colorado–who own Hercules Industries, a heating, ventilation and air-conditioning business–with what amounted to an ultimatum: Give up your religion or your business. 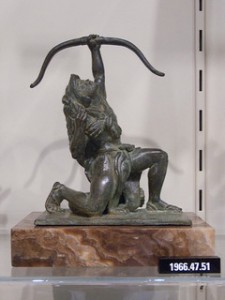 Who will win in the battle of Hercules vs. Obama? Photo credit: cliff1066 on Flickr.

The Newland family has taken the time to evaluate their own religious beliefs and has come to the conclusion that they are morally unable to provide contraceptives, abortifacients, abortion, or sterilization in their employee health care plan. Hercules Industries is self-insured by the Newlands. Despite the Newlands’ sincere religious beliefs, the Department of Justice insists that this Catholic family must comply with the contraceptive mandate.

According to the Newlands’ brief:

They believe that according to the Catholic faith their operation of Hercules must be guided by ethical social principles and Catholic religious and moral teachings, that the adherence of their business practice according to such Catholic ethics and religious and moral teachings is a genuine calling from God, that their Catholic faith prohibits them to sever their religious beliefs from their daily business practice, and that their Catholic faith requires them to integrate the gifts of the spiritual life, the virtues, morals, and ethical social principles of Catholic teaching into their life and work.

I participated in a moot court session where Mr. Bowman gave his arguments and clearly laid out the Newlands’ case. Lest anyone think that the Newlands do not provide well for their employees, Hercules Industries’ current health care plan goes above and beyond many plans in its provisions for women. Mr. Bowman’s arguments detail the health benefits given to pregnant women, those who miscarry, and those with other reproductive-related issues. All the Newlands want is the freedom to adhere to their own religious beliefs concerning abortion, contraception, and sterilization – something that the First Amendment allows.

In order to force a person – or in many cases a corporation – to violate his or her religious beliefs, the government must have a compelling interest. The government is held to a strict scrutiny standard, and it must find the “least restrictive means” possible to enforce its rules. While the government claims that it has a compelling interest in forcing the Newlands to violate their strongly held religious beliefs, this claim rings false. In their filed brief, the Department of Justice, claims:

Thus, it is just not true … that the burdens of the [regulations] fall on religious organizations “but almost no others.”‘

However, written into ObamaCare is an exemption for “grandfathered plans.” Any corporation with this type of health care plan will not be forced to comply with the contraceptive mandate at this time – even though such corporations will be forced to comply with other portions in the preventive care section of ObamaCare. By exempting certain companies – even without religious reasons – the Obama administration has demonstrated that there really is no compelling government interest in forcing the Newlands or other religious employers to violate their beliefs. How much sense does it really make to say, in effect, “We will not force countless employers to provide contraception, but we will force companies owned by religious people to provide it”? (Grandfathered health care plans cover millions of employees in the United States.)

In short, President Obama’s Justice Department thinks the answer is simple: comply with our demands, pay millions of dollars in fines, or quit your family business:

Hercules Industries has ‘made no showing of a religious belief which requires that [it] engage in the [HVAC] business,’ the Justice Department said in a formal filing in the U.S. District Court for the District of Colorado.

In response to the Justice Department’s argument that the Newlands can either give up practicing their religion or give up owning their business, the Alliance Defending Freedom, which is representing the family, said in a reply brief: ‘[T]o the extent the government is arguing that its mandate does not really burden the Newlands because they are free to abandon their jobs, their livelihoods, and their property so that others can take over Hercules and comply, this expulsion from business would be an extreme form of government burden.’

Employers who fail to comply with the contraceptive mandate will be forced to pay $100 per day, per employee, as a fine. (The provisions of ObamaCare are complicated, and under certain circumstances, the amount may be lessened.)

With 265 employees, a business like the Newlands’ would need to pay the government $26,500 per day if they decided not to comply with Sebelius’s regulation and insured their employees anyway. Over 365 days that would amount to $9,672,500.

The government shouldn’t punish people of faith for making decisions in accordance with their faith. Every American should know that a government with the power to do this to anyone can do this–and worse–to everyone. The abortion pill mandate unconstitutionally coerces the leadership of Hercules Industries to violate their religious beliefs and consciences under the threat of heavy fines and penalties. That is simply not acceptable in America.