What gives anyone the right to decide whose life is worth living and whose isn’t?

Everyone wants a perfect baby. Let’s say you close your eyes and envision what that perfect child would look like. You’d probably imagine a boy or a girl, hair color, eye color, the dimples in their cheeks, a cute little belly button. You’ll probably picture him or her smiling and laughing in your arms, happily going to school one day, getting their driver’s license, getting married.

But what if you find out that that perfect baby you envisioned in your womb turns out to be a little bit different? For some people, that means that the baby no longer has a right to life. And this attitude, that disability must mean death, is most prevalent when it comes to the prenatal diagnosis of babies with Down syndrome. They’re killed 9 times out of 10. 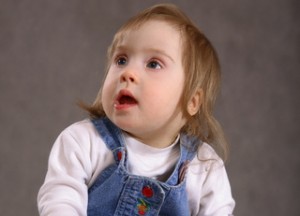 Think about that: 90% of parents who find out that their baby has an extra chromosome – one little extra chromosome – will choose to kill that baby. To never let that child have a chance at life. For every ten babies who get diagnosed with Down syndrome, only one will get to live. Only one. The other nine will be killed – rather brutally, as it’s typically a later-term abortion – simply for being different.

One abortion advocate thinks this is a good thing. No surprise there, really. And while making her “eugenics is awesome” argument, she also dabbles in some extremely outdated, hurtful, dangerous stereotypes about people living with Down syndrome.

Down Syndrome (also called Down’s Syndrome) is a pretty touchy topic for some, and for good reason. It’s a developmental disorder that is caused by the 21st chromosome to duplicate, resulting in developing fetus to have one extra chromosome as opposed to the normal 46 that people should have. Because of this, a child born with ‘trisomy 21’ is sometimes severely mentally and physically maldeveloped. The thing is, not all cases are severe, but amnio tests given during pregnancy can’t really tell you just how afflicted the child will be. That’s why abortion is, and very well should be, an option.

… A lot of women simply do not want to bring a child into the world that is afflicted by an abnormality. This has been debated before, and will probably be debated forever, but the fact of the matter is that this is a choice. It’s a choice that should be left up to the parents and not up to political pundits or the single-parent offspring of former governors. This isn’t something that there should be a group cause against, because it is simply just inhumane to expect people to force themselves into carrying children they do not want, especially when it is due to a medical condition that could either mean a life of dependence or not. It’s a gamble, and not everyone likes to play with the odds.

To those women who do like to gamble against the odds: good for you. Just don’t expect every single parent on Earth to subscribe to the idea that broken DNA is a good thing.

The millions of families who have children with Down syndrome are cringing right now, because this is exactly the attitude they have to fight back against. It is, again, outdated, and overwhelmingly negative. It takes the view that to raise a child with Down syndrome means to forever be a martyr, that life will be miserable, and that choosing to carry a baby with an extra chromosome means you are making some kind of noble sacrifice. A child with Down syndrome clearly isn’t like a normal child, so parents shouldn’t be expected to suffer through raising one.

Ah, yes. What a cross to bear, all this love and happiness and positivity. It sounds like it must be really hard, raising a kid with broken DNA.

It is people like this writer, Chelsea Hoffman, who make parents feel that having a child with Down syndrome is the worst thing in the world – even though reality, especially in this day and age, could not be more different. Getting a prenatal diagnosis of Down syndrome more often than not means that you will be overwhelmed with negativity, even from your own doctor. You’ll hear about the worst-case scenarios, all the things that can potentially go wrong.

You won’t hear that with today’s medical advances, combined with therapy, most children with Down syndrome lead perfectly normal, healthy, happy lives. You won’t hear that they go to school, work, live on their own, get married. I firmly believe that if parents were given a more positive outlook on what it means to raise a baby with Down syndrome, they wouldn’t still choose abortion.

But let’s say they still didn’t feel up to the challenge of raising a child with a disability. Fair enough: it isn’t always going to be easy. Believe it or not, there’s a solution to that, too. It’s called adoption. And despite the fact that babies with Down syndrome apparently have “broken DNA,” the waiting lists to adopt a child with Down syndrome are actually very long. But of course, that doesn’t fit into the abortion-on-demand narrative. Raising a baby with Down syndrome isn’t for you, you say. So the argument then becomes, because you’re disabled, you should die?

How is that not an absolutely sickening mindset to have? Forget Down syndrome. People like Chelsea Hoffman are making the argument that the disabled have less of a right to life than the “normal” people do. And there is something very, very disturbing about that.

What gives anyone the right to decide whose life is worth living and whose isn’t?