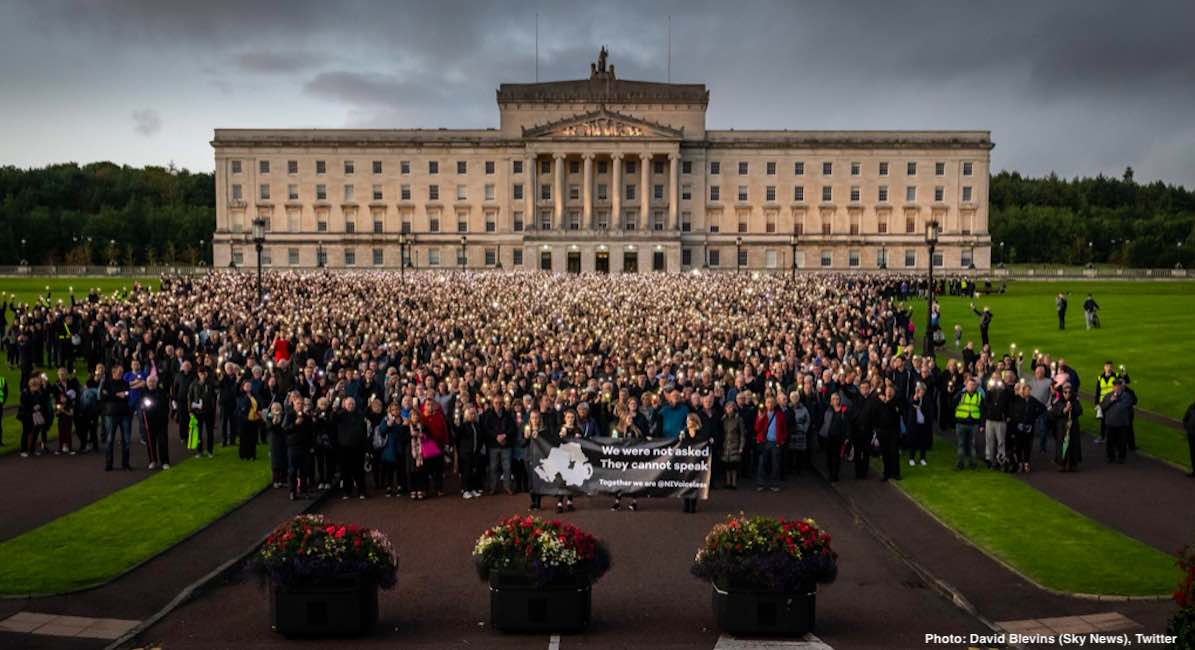 Pro-lifers in Northern Ireland gathered this past weekend for two demonstrations protesting the recent forced liberalization of the country’s abortion laws by UK lawmakers.

On Friday, around 20,000 protesters [Editor’s note: this estimate from SkyNews is being disputed by FactCheckNI], organized by NI Voice for the Voiceless, met at the gates of Stormont, seat of Northern Ireland executive power, and walked to the Parliament buildings. Protesters stood silently holding lights for six minutes to represent the six counties of Northern Ireland. The following day, thousands gathered for the annual pro-life coalition event March for Their Lives. On the same day, counter protesters organized a nearby “Rally for Choice.”

Sarah Crutchley, a spokeswoman for the pro-life event, told the Belfast Telegraph, “We want our silence to say two things: that first, we, as the people of Northern Ireland, were not asked about this change in legislation, and that it actually goes against public opinion here, and that every sitting MP from Northern Ireland voted against this change, and that the unborn children, they have no voice, they cannot speak so they were not considered in this legislation.”

Standing in silence – 6 minutes for the 6 counties of NI. Sending a clear message that we say no to abortion for this place we call home. Feeling humbled to have been a part of this powerful event #wewerenotasked #theycannotspeak #BothLivesMatter @McAvoyDawn @BothLivesMatter pic.twitter.com/XhUIeWxiHo

In July, the UK Parliament passed the Northern Ireland (Executive Formation) Act 2019, which would require the government to make provision for abortion laws if the government does not assemble before October 21, 2019, with the abortion law passing in March 2020. Northern Ireland’s government has been absent since 2017, when talks between the two major parties collapsed. In the meantime, Westminster has been in charge of certain issues, but as recently as February of this year, abortion was specifically named not to be one of those issues.

No Northern Ireland representative voted for the abortion liberalization measure. According to the BBC, Nothern Ireland currently has no statutory framework for permitting legal abortion.

At the @NIvoiceless protest. Joining thousands of people from across all backgrounds tonight, to stand together and defend the rights of the unborn child. Both lives matter. pic.twitter.com/k8XVvlCZ1B

In interviews with the protesters, there was a common theme. Abortion was forced upon Northern Ireland by the London Parliament. This law is unwanted by the people of the country, who voted against liberalizing the country’s abortion laws as recently as 2016. “The people of Northern Ireland weren’t consulted, and our elected representatives don’t support, and public opinion here doesn’t support it,” said event organizer Paul Coulter in a BBC Newsline broadcast.

As one pro-life marcher interviewed by BBC said, “We’re here to protect the unborn, to remember them, to say to the politicians and to everybody that we care. And they are precious.”

On Twitter, the pro-lifers organized under the hashtags #WeWereNotAsked and #TheyCannotSpeak.

Editor’s Note, 9/30/19: Updated to reflect that 20,000 participant estimate provided by Sky News is in dispute at this time.