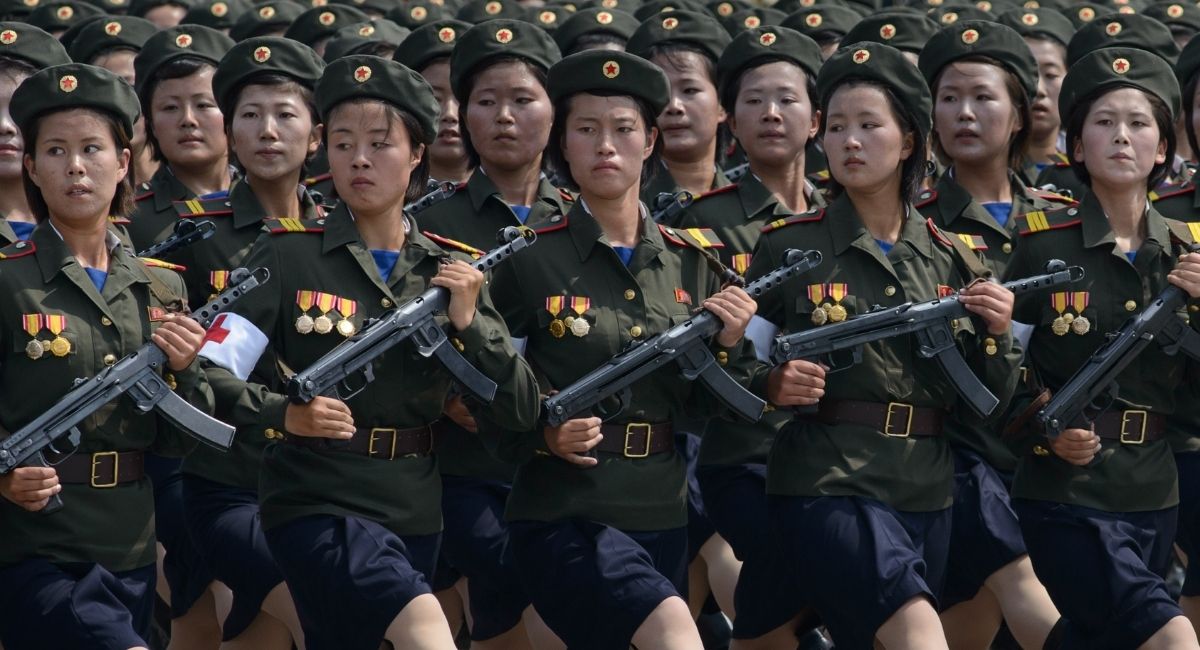 A defector from North Korea claims women are being forced into abortions and treated with brutality during their mandatory service in the North Korean army.

The woman, who used the alias “Jennifer Kim,” spoke to the Committee for Human Rights in North Korea (HRNK) about her experience. According to Kim, women were routinely mistreated during their time in the army, in which service is required for all women until they turn 23. Kim said women were forced to use “soggy foot pads” instead of proper menstrual pads, and were punished severely for any perceived infractions.

Kim, for example, says she was forced to place her hands in freezing water, and then hang on an iron bar, which froze onto her hands and ripped off her skin. She also testified that she was made to survive on just a few spoonfuls of corn each day; the starvation was so intense that she stopped menstruating regularly.

She also said she faced sexual abuse from a political adviser, who called her to his office when she was 23 and about to leave the army. “If I refuse his request, I can’t become a member of the Workers’ Party of Korea,” she said. “If I return to society without being able to join the party, I’m perceived as a problem child and I will be stigmatised for the rest of my life. That means you won’t be able to get a good job and it will be a problem when you try to marry – what could I have chosen? In the end, I was sexually assaulted by him.”

Later, when Kim realized she was pregnant, she was called into a military medical office, without any clue what awaited her. “A military surgeon was already waiting for me,” she said. “He performed an abortion on me without anaesthesia – it still haunts me today. Because of that experience, not only do I still struggle mentally, but I’m also not able to have children. So even now, it’s difficult for me to have a good marriage. The shame I felt back then still haunts me and will continue to do so.”

Greg Scarlatoiu, executive director of HRNK, said the mistreatment of women in North Korea is a widespread issue. “North Korea’s women soldiers are subjected to relentless abuse, induced malnutrition, cruel punishment, sexual harassment and sexual assault,” he said. “Their tragic plight epitomizes the criminal trajectory of a regime established 73 years ago, presumably to create a fair and equitable society. Today, this regime only cares about preserving itself. It abuses and exploits the people of North Korea in order to ensure its own survival. The abuse the nation’s daughters in uniform suffer at the hands of the regime’s henchmen reflects the deeply-embedded and incurable pervertedness and corruption of the party and the entire top leadership, all the way up to the top of the chain of command.”

Kim’s account is not the first allegation of forced abortion in North Korea. A United Nations report found women who attempted to flee the country were subjected to forced abortions and infanticide. Other women were forced into abortions because the fathers of their children were Chinese. Many were made to have premature deliveries, with their infants left outside to freeze to death after birth.

With the U.N. report, as well as the HRNK report, it was alleged that human rights abuses such as these are systemic within North Korea.