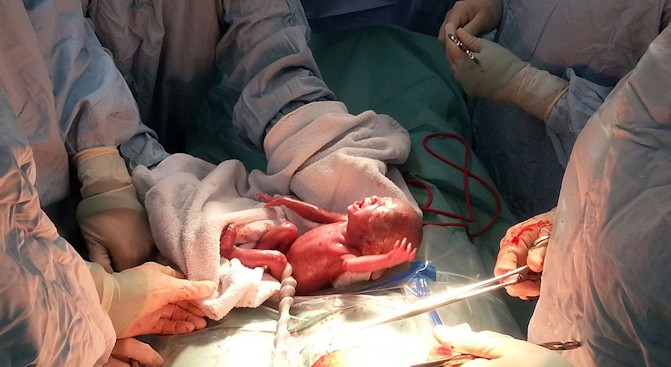 Tiny Adelaide Caines lived only one hour after birth, but her parents are hoping their precious daughter’s life and death will change the face of the abortion debate in the United Kingdom. Literally.

On December 27, 2013, Emily Caines, 24 weeks pregnant at the time, began to bleed heavily and was rushed to Southmead Hospital in Bristol. The medical center there had a special unit for premature babies, something Emily and her husband Alistair hoped could save their little girl’s life. Emily had already lost her first daughter, Isobelle, in 2011, due to preterm labor which began at 23 weeks, so the couple had rejoiced when Emily’s second pregnancy made it to the 24 week mark.

Reaching 24 weeks gestation meant this time, medical professionals would be obligated to attempt to save their baby’s life if any complications arose. When Emily made it to that mark, she and Alistair purchased a little outfit and stuffed animal for their unborn daughter, and felt hope rising. Until three days later, when Emily’s bleeding began.

At Southmead Hospital, attempts to halt Emily’s labor failed, so doctors opted to deliver their little girl via c-section, hoping that sparing the baby the trauma of birth would increase her chances of survival. When Adelaide emerged, a tiny infant cry came with her, and over the hospital drapes, Emily could see her daughter’s hand waving above her head. One of the attending physicians quickly snapped a photo of the birth – a picture that would change everything for the couple, and become a priceless treasure when, one hour later, doctors informed the parents that all efforts at inserting breathing tubes into Adelaide had failed. She was too tiny for even their smallest equipment. Adelaide died a short time later, but her life left an indelible mark on her parents.

Seeing Adelaide’s tiny, fully formed body, and hearing her cry brought home to her parents the reality of later term abortions. “Our picture shows Adelaide was not a feotus she was a fully formed human being and to think that a baby like her could be legally terminated on grounds of a lifestyle choice is to me is horrifying,” Emily explained. She and Alastair have chosen to publicly release the photo of their baby girl in a bid to reopen the debate on the legal limit for abortion, saying what they witnessed in their daughter’s short life “makes a mockery out of the 24 week legal limit”.

The couple also hopes to break down taboos surrounding neonatal death and miscarriage, explaining that many moms who lose infants early in pregnancy feel pressure not to talk about their lost child, or have their experiences minimized. “I think there is still a big taboo around premature baby loss because people don’t understand it. . . . My first daughter was born at 23 weeks and classed as a late miscarriage, Isabelle was born at 24 weeks and classed as neo natal death but they looked exactly the same. Neither were a miscarriage but I think it’s easier for people to use that term. But that doesn’t acknowledge the fact that a mother has been through labour, delivery and seen and held their baby.”

And Adelaide? “Our daughter may not have lived long but she was still our daughter and we love to talk about her and celebrate her life. I hope this beautiful picture of my daughter being born helps change people’s perspectives.”