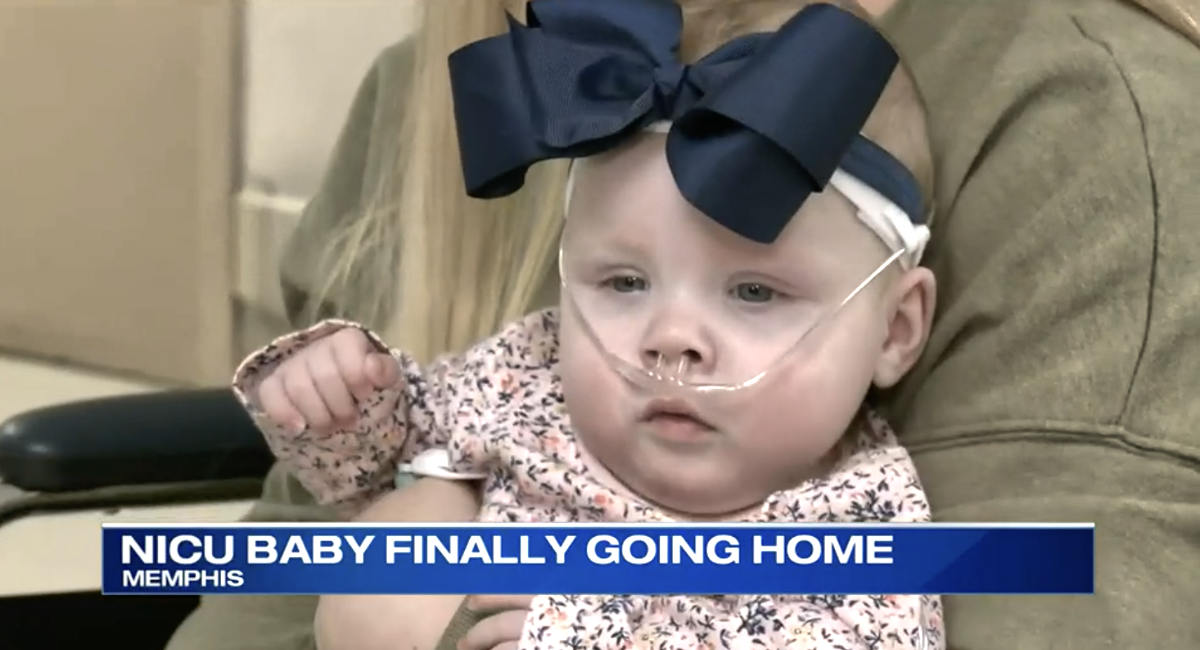 A baby girl born at 25 weeks and weighing just over one pound is going home in time for Christmas, after spending 10 months in the NICU.

Christy and Daniel Keaton welcomed Nora to the world much earlier than expected; born prematurely at 25 weeks, she spent 10 months in the NICU at Regional One Health in Memphis, Tennessee. Christy had been experiencing problems with her placenta, and Nora was born before her lungs were fully developed. She weighed just 1lb, 13oz.

“You don’t really know if your baby is going to live or not at that point, so it’s just scary,” Christy told Fox 13. “She had premature lungs, she had to grow her lungs quicker than the ventilator would damage them.”

Dr. Chad Pinkard, who helped care for Nora in the NICU, said their hospital is able to accept infants born as young as 22 weeks. He explained how, with the right care, premature babies are able to survive being born at younger and younger ages — though that doesn’t mean the journey will be easy. “I think it’s better that we let them know up front that it’s going to be kind of tough at times but that they’ve got a whole group of support system that’s going to be there for them,” he said.

It’s a sentiment Christy agreed with. “The nurses were so amazing; they did everything they could for her from day one,” she said. “I couldn’t have asked for a better group of nurses to take care of her.”

Curtis Zy-Keith Means is believed to be the most premature baby to ever survive; he was born at 21 weeks and one day, weighing less than one pound. However, numerous other babies have been born at 21 weeks and survived, with chances of survival increasing with age. One of the biggest differences is made when doctors are willing to give active care to the child instead of merely palliative care. Many of these babies are capable not only of surviving but of thriving — as Nora is now.

Her family is thrilled to welcome her home just in time for Christmas. “I’m so excited,” Christy said. “This is her first holiday home.”