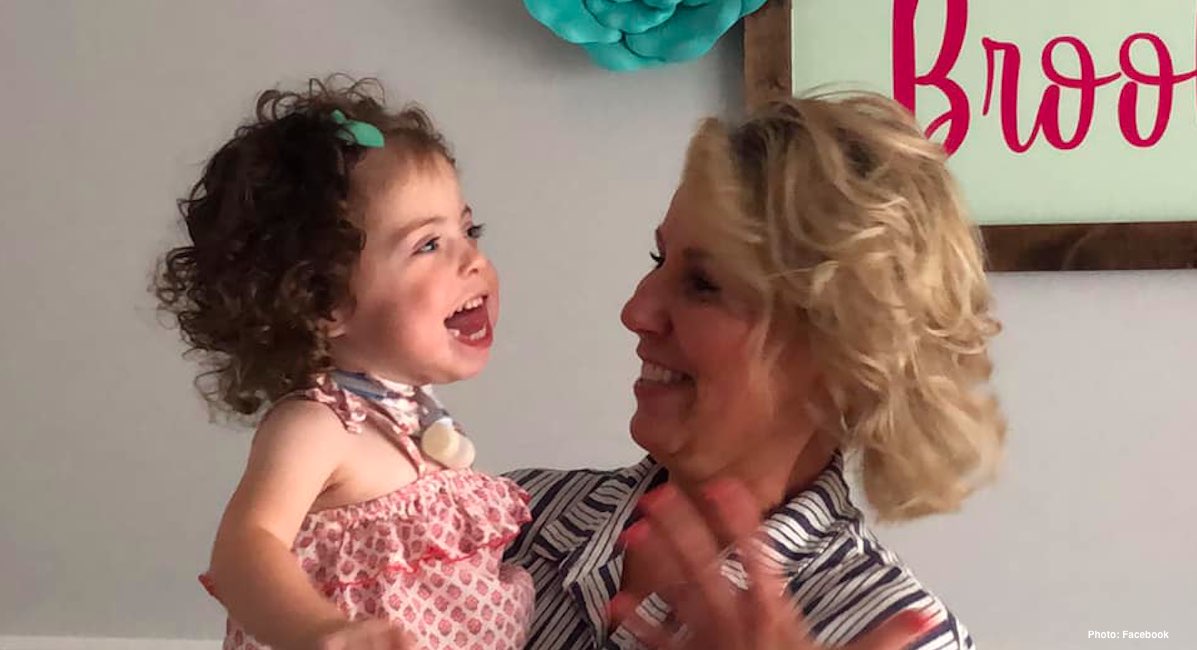 When NICU nurse Kim McDaniel of MU Women’s and Children’s Hospital in Columbia, Missouri, first met little Brooklyn, she knew the little girl would not have an easy life. Brooklyn was born in July 2017 with a “massive tumor in her mouth that grew from the base of her tongue,” reports local station KOMU. “The tumor was so big it filled her entire mouth, protruded out of her mouth and grew into her throat.  This made it nearly impossible for Brooklyn to speak or eat.” A tracheostomy and a feeding tube allow Brooklyn to breathe and eat.

Brooklyn’s condition was so challenging that her birth parents unfortunately stopped coming, leaving her in the hospital’s care. McDaniel, with two grown children of her own, hadn’t planned on raising another. But she and the other nurses had essentially become Brooklyn’s family. McDaniel told KOMU she felt “so bad” for Brooklyn, who had to have multiple surgeries. “It just broke my heart every time she would go for surgery. When they would bring her back, there was no one for the doctors to talk to. There was no one waiting for her. We knew she was alone but we never wanted her to feel like she was.”

While McDaniel hoped Brooklyn’s parents would come back, they didn’t. “She had no visitors,” McDaniel said in a KOMU video. And so she prayed for God to give Brooklyn a family. Then, God spoke to her. “I just really felt like God was just saying ‘You’re asking me to do something that I’ve equipped you to do.’” She chose to become a foster mother to Brooklyn, and says everything fell into place much more quickly than the process would normally take. And in April of 2018, McDaniel adopted Brooklyn, though she had fears about raising a child with special needs alone, as a single, formerly empty-nester parent. McDaniel’s grown daughters, for their part, absolutely adore Brooklyn. But the road has been a challenging one. KOMU notes:

Since the adoption, the McDaniels have faced great difficulties. At almost two years old, Brooklyn has had 11 surgeries in the past year. Her mom said the surgeries are mainly to reduce the tumor in Brooklyn’s throat and mouth without damaging her tongue. Doctors have found the tumor is now growing at a rate much quicker than the surgeries can keep up with.

“We can’t have her go through a surgery every three months,” McDaniel said. “Every surgery is now more difficult for her than the last.”

McDaniel said removing the tumor completely would mean Brooklyn would lose her tongue. She has been working with doctors at Cinncinati Children’s Hospital to devise a plan that would allow Brooklyn to keep her tongue.

“I’m just trying to fight for her,” McDaniel says in KOMU’s video, “but it’s tough, because it just doesn’t feel like she can really catch a break…. I just want her to have a life that doesn’t have so much pain.”

Children like Brooklyn who have special needs are valuable and loved. Their biological and adoptive families need supportive communities who will rally around them in time of need. To follow more of Brooklyn’s story, the family has a Facebook page called Brooklyn’s Village, where followers can get updates on Brooklyn, and can leave their own encouragement and prayers for Brooklyn’s health, and for the family. The family also has a GoFundMe page to help defray some of the costs for Brooklyn’s medical care.